By Forgotten Railways, Roads & Places
Thank you for visiting this site! Forgotten Railways, Roads & Places seeks to digitally preserve the memory of forgotten transportation, ghost towns, places, and other sites of historic value. As railroads and lines come and go, the idea is to preserve their history and memory here. Where we are not the only transportation history website, we are trying to preserve as much history as we possibly can.

Now for a bit about myself. My story begins as a child growing up just outside Chicago, one of the great railroad hubs of the United States, and among the few cities where seven Class I railroads meet. I’d always had a love of the railroad. There were so many different lines, it was and remains today one of the best places to railfan in the world.
Ironically, however, my hometown of Bolingbrook didn’t have any railroads, or so I’d thought. I discovered a railroad line off of Old Chicago Dr as a small kid, but much to my chagrin, the line was in rough shape, and certainly didn’t often host a train. In fact, by that point I had been too late already to see any activity along it.

Fast forward many years and the magic of Google Maps allowed me to traverse the United States and the world at my leisure, all from my seat. I had worked a job reporting on traffic across different regions of the United States, and soon began to explore those same areas' satellite imagery. Wherever I went, I came across oddly-angled streets, utility rights of way that didn't quite follow streets, and linear greenery that ran from small town to small town, that implied there was once a road (or railroad) connection between them. I was discovering just how many lines have been abandoned, not just in the United States, but across the world.
As such, I begin to discover that Bolingbrook is not alone to the phenomenon of abandoned railroads. In fact, there are plenty of abandoned rights-of-way all across the US. On a whim, using My Maps, I decided to trace one, not knowing I was embarking on a path that would lead to what this map is today, and develop relationships with tons of people across the world. Today, that same map has over 9,000 rights-of-way, in addition to three other maps spun off from it, for ghost towns, interesting railroad points of interest, and heritage railways.

And it’s nowhere near complete.

The vastness of the railroad network today pales in comparison to the days of yesteryear, some lines have simply been abandoned for scrap in the desert (Tonopah & Tidewater, et. al), destroyed by mother nature (Kinzua Bridge), flooded to create lakes (Many more than I’d realized), and one was even left fully intact deep in the Maine forest (Eagle Lake & West Branch Railroad). While much fewer miles of active railroad exist across the United States today than at its peak, it is important more tonnage is moved than ever before, and quite frankly, the railroad industry as a whole has never been more profitable. Thus, the story of abandoned railroads is simply one of change over time, and should not be viewed in a positive or negative light. Thus, as railroad property opens up, its our opinion that it can be best used, and preserved, as public rail trails.

This website isn’t complete, and will never be complete. There will always be abandoned railroads, roads, and ghost towns that have been entirely lost to history. As such I fully welcome your criticism and information to help make it that much more accurate. There are numerous resources for finding abandoned places, and wherever possible, we will provide links to those websites that help paint as clear a picture of the off the map places as we can.

Outside of mapping abandoned and forgotten places, I'm really just a typical guy. I'm happily married. I'm a huge fan of Chicago sports, the early years of The Simpsons, history, weather, hiking, classic video games, restaurants, and not talking about myself.
Thanks for your interest and support!
Andrew 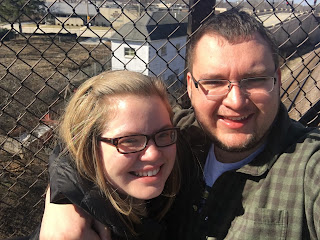 View from Goldmine Rd, west of Pearl City, IL, along the abandoned CGW right-of-way. Other than a small Canadian National Railway operation near DuPage Airport, a few industrial customers for Union Pacific between Tyler Rd and Kautz Rd in St. Charles, and a small operation serving the power plant in Byron, the entirety of the 147 mile former Chicago Great Western Railway line between Forest Park and Galena Jct is abandoned, making it the longest abandonment from Chicago by far. The line extended from Chicago, on trackage which now leads to the Union Pacific Global 1 yard, and then followed a line immediately north of where the current Forest Park CTA station is today, paralleling the Chicago Aurora & Elgin Interurban Railroad, which itself is abandoned. But before we see what the line looks like today, let's examine Chicago Great Western's history. CGW Westbound at Elmhurst, IL. 1962 Image: Roger Puta The Chicago Great Western was one of the last Class
Read more

On March 29th, 2016, I would begin the journey to map the abandoned railroad network. This blog is going to give you a little history of the project, and where it is now, and where I would like it to go. Before I say anything else, thank you for your support. This project would be nowhere near where it is right now without your help, information, and enthusiasm. I've had the great pleasure of being able to talk to many of you about abandoned railroad lines, many of which I wouldn't have been able to find myself. So thank you! BACKGROUND: Before this project began, I would hardly be described as a railfan. I mean, don't get me wrong, I did enjoy trains, however my background is in the traffic industry. Aside from that, I loved learning the history of our road network, and how roads got their numbers and why they traveled in the direction they did. Both the US Route Network and the Interstate Highway System are highly fascinating, to me at least. I honestly found the
Read more