Showing posts from December, 2022
Show all

In 1831, the third common carrier railroad opened in the United States, following the B&O Railroad  in 1828 and the South Carolina Canal and Railroad Company  in 1830, which operated the first scheduled passenger train. This railroad would service the bustling city of New Orleans, Louisiana , connecting the Mississippi River to Lake Pontchartrain along a roughly six mile route. It's hard to understand just how new railroad technology was at this time, as while New Orleans wanted a railroad, the initial construction of the railroad perplexed its builders, most of whom had yet to see one operate. "Many problems confronted the builders; few of them had ever seen a railroad, and none had any but vague ideas about the construction and operation of one. Perplexing questions had to be solved. Were the coaches to be furnished with springs? Were iron or wooden rails to be used? Were the swamps over which the line was to run to be bridged or the land to be filled in for a permanent
Post a Comment
Location: New Orleans, LA, USA
Read more

One of the most fascinating maps I've seen are the Ancient Courses of the Mississippi River by cartographer Harold Fisk for the Army Corps of Engineers . The maps (they run up and down the Lower Mississippi River), show the present (c.1944) course of the river, as well as how that course has changed over time through stages. The river changes course continuously, as do all rivers, and especially so in the case of when major floods, earthquakes, or other disasters that may alter the river occur. Fisk is as much of an artist as he is a scientist, as these maps are incredibly beautiful and yet perfectly convey how the Mississippi River has changed over time. 1944 Fisk Map of the Mississippi River (Plate 32, Sheet 6) ( Amazon Link ) The maps represent the Meander Belt of the Mississippi, according to Public Domain Review , and are primarily focused on the last several millennia of changes. As the Mississippi and Missouri Rivers  are the primary rivers of the third largest river system
Post a Comment
Read more 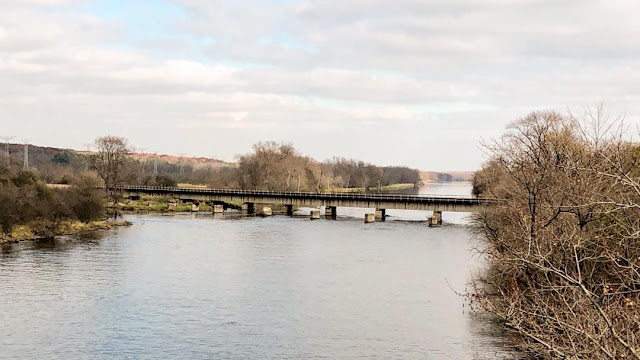 Looking from the Lemont Road Bridge east towards  this bridge in Lemont, IL , you’ll see bridge piers in front of it, just to the railroad bridge's immediate west, which hold no tracks or road. Despite their redundancy, they're quite easily visible So why do these piers exist, and what was the bridge they used to carry used for? From what I’ve been able to tell, they are remnants of a former bridge which once stood here (over the Des Plaines River), before the Sanitary & Ship Canal was built. The Metropolitan Water Reclamation District  built the currently standing bridge around 1900. This bridge carries the BNSF Chillicothe Subdivision .  Note the piers in the foreground. FRRandP photo. My initial thought was that they were simply bridge piers from an earlier mainline bridge, except that didn't appear to be the case, as the piers have been there since at least 1938. It turns out that my initial thought was true, but I was wrong on the reasons why the piers remain today
2 comments
Location: 15440 Canal Bank Rd, Lemont, IL 60439, USA
Read more

Route 60: The Original Number of Route 66

US Route 66 was one of the original US Highways , being designated in 1926 along with the rest of the original routes. But before its designation, there was a tremendous controversy over its numbering, as there were over numerous highways early on in the system's creation. Because of this, you almost got your kicks on Route 60. Missouri Highway Map, c.1926 showing the proposed US-60 through the state. Like with any government project as vast and complex as the US Highway System, it is the product of numerous compromises and debates over numberings, routings, alignments, costs, and numerous other whims of those in Congress who ultimately approved the system. In the early 1920's, the named Auto Trails were giving way to a network of then-modern highways to connect the nation through automobiles as the railroads had done decades earlier. 1926 Illinois State Highway Map , showing US-66 as IL-4 still. By 1928 , US-66 was added to the map. The numbered system would have the longes
2 comments
Location: Springfield, MO, USA
Read more

For the better part of the last year, I've been stuck trying to figure out what appeared to be the trace of an abandoned rail line immediately west of Pinckney, MI, which is easily visible in the satellite imagery below. Google Maps image of the line west of Pinckney via our Abandoned & Out-of-Service Railroad Lines map . The line in question diverges from the right of way of the former Grand Trunk Railway line that is now part of the Lakelands Trail . The grading is fairly consistent for the first 10 miles of line, and then just stops around the Joslin Lake area, which led me to believe that it was either a long-forgotten ice house spur, just like the California Ice and Coal Company Line in Antioch, IL, or a logging railroad of some kind, of which numerous operated in the State of Michigan, albeit usually in the northern part of the Lower Peninsula. However, after being unable to find any information corroborating those theories, I finally came across what appears to be the R
Post a Comment
Location: Pinckney, MI 48169, USA
Read more

The Kansas City Clinton & Springfield Railway connected Olathe, KS with Ash Grove, MO along a 155 mile right of way .  KCC&S Steam Engine , c.1924. Springfield-Greene County Library. Built in 1885, it long paralleled the Kansas City and Southern Railway, which ran a quite similar route in spots. Eventually both lines became part of the St. Louis & San Francisco Railway (" The Frisco "), who would purchase the railroad in 1928, incorporating parts of the line into it's Kansas City-Springfield route, while abandoning most stretches by the mid-1930's. This section was deemed inferior and redundant to the better constructed right of way, leading to its abandonment. The 1894 USGS Clinton Map shows the routes running in parallel to each other, and offers a hint at how close these rights of way were, in some spots running beside each other. Interestingly, much of these parts of the route are underwater today as a result of the construction of the  Truman Reserv
Post a Comment
Location: Pleasant Hill, MO 64080, USA
Read more

Should the RTA's Metra, Pace and CTA Branches Merge Together? 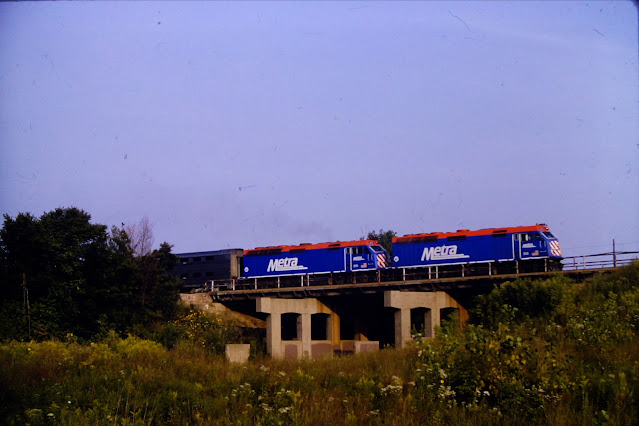 An article I happened to stumble upon recently alluded to a significant problem in Chicago and the surrounding region's transit infrastructure; namely that it is split into three parts. It's one of those problems of our infrastructure that everyone seems to know, and yet is rarely discussed. Metra handles the regional commuter rail of the Regional Transportation Authority , on paper as the " Northeast Illinois Regional Railroad Corporation ". Rolls right off the tongue. Metra 213 at Blue Island, IL. Photographer: Frank Novak, 1986. FRRandP photo collection. Pace handles suburban bus service, with very few of its routes entering the City of Chicago. Many of Pace's routes, especially their longer routes, date back to the numerous suburban bus systems , which usually didn't interact with one another, with the exception of those routes which replaced interurban rail systems, like the Chicago and West Towns Railway . Pace Bus 6666 at Woodfield Mall. The CTA hand
1 comment
Location: Chicago, IL, USA
Read more 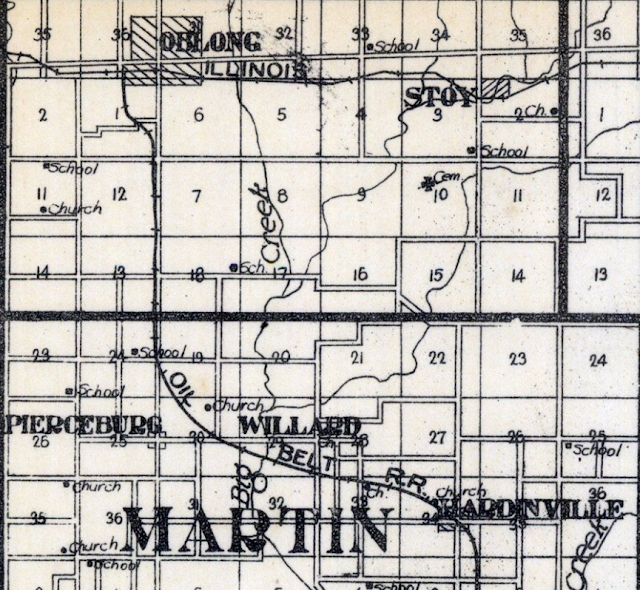 The Oil Belt Railway was a very obscure, and very short lived, short line railroad that ran from Oblong to Bridgeport, Illinois, beginning service in 1913. The track was slightly less than 25 miles long between the two towns in southeastern Illinois. A branch line to Lawrenceville was proposed from Bridgeport, but was never constructed. ( Right of way ) It interchanged with the Illinois Central Railroad at Oblong and the B&O Southwestern Railroad in Bridgeport. Despite not running until 1913, construction actually began along this road four years prior in 1909. The fact that it took four years to get this line running should be a good indicator of the line's typical operations throughout its life.  Right of way on the 1930 Crawford County Plat Map , over a decade post-abandonment. (Historic Map Works) A narrow-gauge operation, one of the very few that were never converted to standard gauge in the state, the line hauled grain and hay to local farmers in the area, as well as
Post a Comment
Location: Oblong, IL 62449, USA
Read more
More posts