Showing posts from May, 2021
Show all

I will start today's blog by stating that I am not a fan of the Chicago-Kansas City Expressway . Or, more specifically, I am not a fan of "Route 110" in either Missouri or Illinois, mostly because it has been functionally obsolete since the day it was first legislated into existence 11 years ago on May 27th, 2010. How is it that a highway designated that recently considered forgotten? Probably because nobody knew what to make of it even when it was originally designed. Even in this article explaining the Chicago-Kansas City route, or CKC, the number 110 doesn't come up once. Today I'm going to explain why I'm not a fan of this road, why it exists, and what I think would help tremendously in making the road a somewhat legitimate part of Illinois' highway system. Wikipedia Commons Map of IL/MO-110 , or the Chicago-Kansas City Expressway, or the *shudders* CKC. Let's start with the actual route itself. Shouldn't a Chicago to Kansas City Expressway b
2 comments
Read more 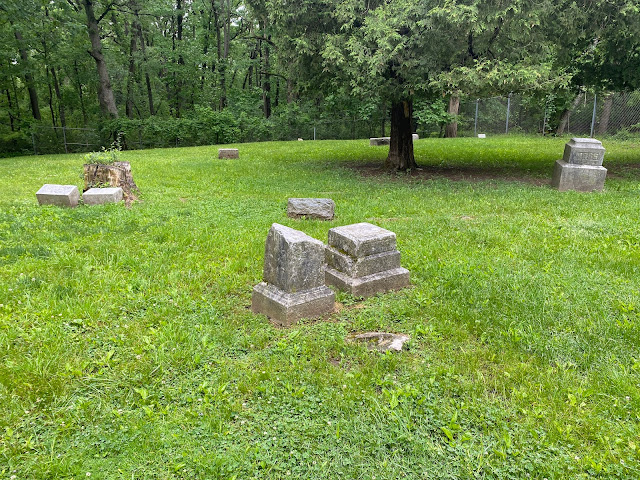 Bachelor's Grove Cemetery is a largely abandoned cemetery located in unincorporated Bremen Twp. of Cook County. Believers in ghosts and ghost stories typically flock to the area in search of the paranormal, and numerous apparitions and ghosts sightings have apparently occurred in the cemetery.  It dates back to when the area was first settled, in the 1820's to 1840's, which is a similar timeline as many areas in Chicago's suburbs, which were opened to white settlers in 1804, which was the main conflict of the Black Hawk War. The cemetery is in very poor condition. Many of the graves are either weathered or vandalized beyond recognition. I think the reports of paranormal activity at the site largely derives from its condition. In addition its location, which is located on an old alignment of Midlothian Turnpike, makes it impossible to access via car, however, it is quite easily accessible via a short walk through the forest. This has made it a popular spot for vandals
Post a Comment
Location: 5900 W Midlothian Turnpike, Midlothian, IL 60445, USA
Read more 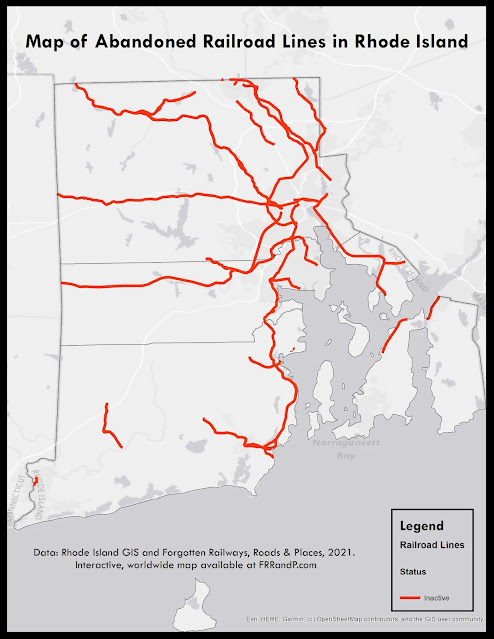 Last month, I took my data that I'd gathered on Abandoned and Out-of-Service Railroad Lines and created a static map of abandoned lines in the State of Illinois . The reason? I just got a certificate in Geographic Information Science and I want to try my hand at getting better at cartography.  The data I've gathered for the last few years is by and large quite good, although I've clearly made some mistakes in spots. However, I cringe when I see my map shared with the general public, as the design clearly needs improvement. I cringe harder when people don't properly attribute it to this site, but thankfully that's a problem that is usually few and far between. So with this in mind, the second state that I created a static map for is Rhode Island, which is also obviously the smallest US State. I thought it would be Iowa, but I am still working out the kinks in that map, and that state has one of the largest abandoned railroad networks in the US.  In the case of Rhod
Post a Comment
Location: Rhode Island, USA
Read more 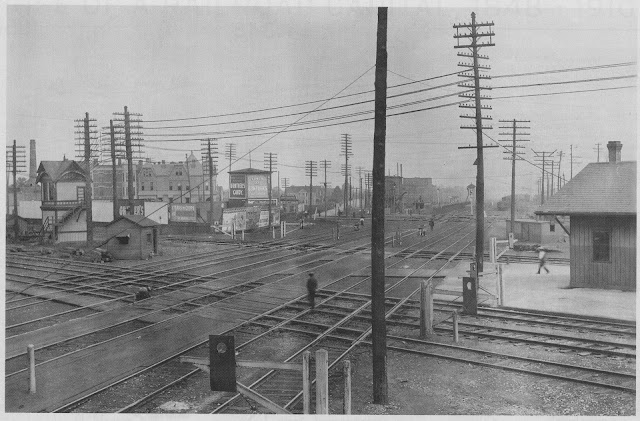 Greater Grand Crossing is one of Chicago's 77 community areas, and the name derives from a huge crossing between two railroads. Sadly, it was the site of one of the first railroad disasters in Illinois, and indeed the United States, when two trains collided within the crossing. The neighborhood has a rich history dating back to the late 19th century. Originally, the area was mostly farmland until the expansion of transportation and the development of industries in the region. The neighborhood saw an influx of African American residents during the Great Migration, when thousands of African Americans left the South for better opportunities in northern cities. During the 20th century, Greater Grand Crossing experienced periods of growth and decline, but remained a predominantly African American community with a strong sense of community and cultural identity. Today, the neighborhood is working to preserve its historical significance and continue its revitalization efforts. However, t
1 comment
Location: Greater Grand Crossing, Chicago, IL, USA
Read more

Filmmaker John Hughes made a number of iconic movies in the 1980's, such as Planes Trains & Automobiles , and Ferris Buellers Day Off , two of my all time personal favorites. Shermer High School from The Breakfast Club . The building once housed  Maine North High School . It still stands and is owned as use for offices (and kept in terrible shape) by the State of Illinois. Many of his films were located in/around the North Shore of the Chicago suburbs. Several of these were specifically located in a fictional town called Shermer.  As Jay and Silent Bob would find out  (link is NOT for children) in Dogma , there is no Shermer in Illinois. That being said however, there are numerous real-life references from where Hughes likely took inspiration for the town, including its former name. Shermer is largely based on the Northbrook, Illinois, which was originally named Shermerville . It was, and remains, a stop on the Milwaukee Road, now known as Northbrook Station on Metra's Mil
Post a Comment
Location: Northbrook, IL 60062, USA
Read more 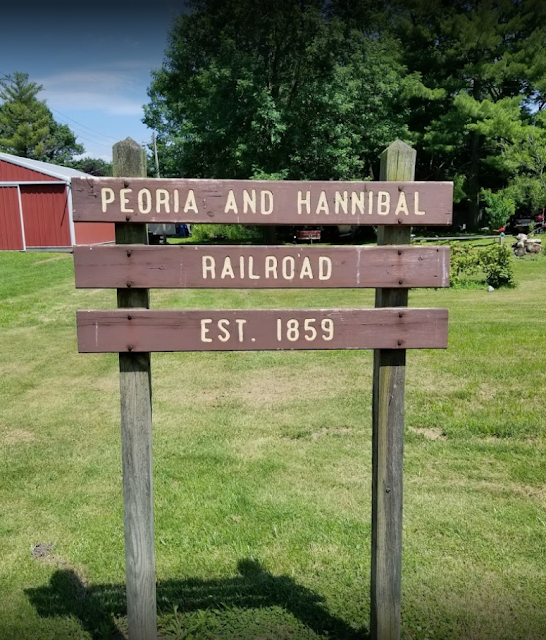 In the Village of Banner, IL, a bit south and west of Peoria, IL lies a cryptic sign, " Peoria and Hannibal Railroad Est. 1859 ". But there is no railroad in Banner, and there never was. So what's the story behind this sign? Peoria and Hannibal Railroad Est. 1859  Image:  Cary Miller at Banner, IL The railroad in question proposed to operate in Banner, or more specifically, Utica, IL, as it was originally called, but these were apparently very early plans, and like many railroad charters, this never came to fruition. The company was a predecessor to the Chicago Burlington & Quincy Railroad . In 1859, The Mississippi and Wabash Railroad, which itself was an early predecessor to the Toledo Peoria & Western Railroad , and the Peoria & Hannibal were trying to come into an agreement with each other to operate along the same territory between nearby Canton and Pekin, IL; either as a joint railway on the same track, or separate grades. The following excerpt comes fr
Post a Comment
Location: Banner, IL 61520, USA
Read more

Discovering an Old Railroad Bridge: A Quick Lesson on How Valuable LiDAR Data Can Be 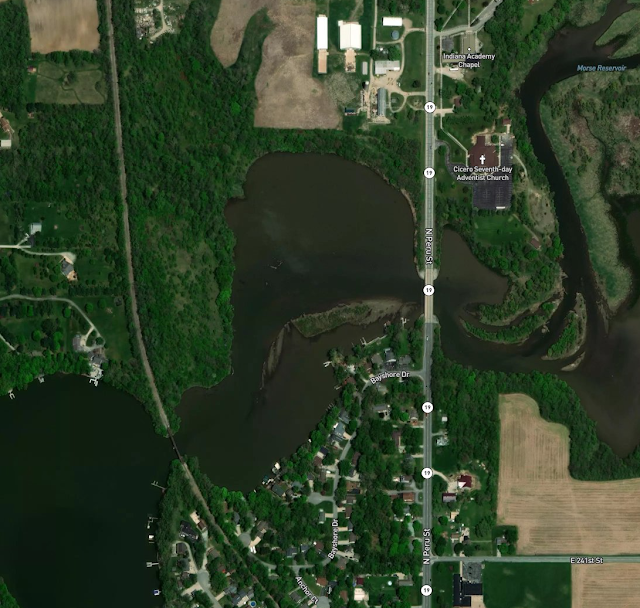 It should probably come as no surprise that I love to learn about our transportation history, and one of the best ways to do that is to study satellite imagery, both current and historic. I've talked before about some of my favorite, free, resources  to find such imagery. But there's also another tool that comes in handy on occasion for finding bits of history you otherwise wouldn't have known about. Or that you knew about, but couldn't find. I'm referring to LiDAR data , which stands for Light Detection and Ranging Imagery.  Let's take a look at the satellite image below of the area just to the north of Cicero, Indiana. Spot any abandoned rights of way? It's ok if you did not; I certainly would not have. There's an existent rail line through the Morse Reservoir , and that's all that appears to be visible. Indiana Satellite Imagery just north of Cicero . But let's see what the Digital Terrain Model, or DTM, LiDAR data on the same area shows, and
Post a Comment
Location: Cicero, IN, USA
Read more

Campbell's Island is located on the Illinois side of the Mississippi River across from Bettendorf, IA. It has the distinction of being the westernmost battle site of the War of 1812.  "Campbell's Island State Memorial is a granite monument that marks the site of a day-long battle on July 19, 1814 during the War of 1812 on Campbell's Island, Illinois." (Enjoy Illinois) The memorial was built in the first decade of the 20th century, at a time of significant building on the island. In 1901, an interurban railway known as the Moline, East Moline & Watertown Railway was incorporated along a six mile line to serve the three cities. Today, Watertown is part of of East Moline, IL, but got its start as a stop on the Milwaukee Road north and east of Moline. A year after incorporation, the company proposed to build up the island as a resort, purchasing the entire island the following year. "After the Moline, East Moline & Watertown Railway Co. bought the island
Post a Comment
Location: Campbell's Island, Hampton Township, IL 61244, USA
Read more 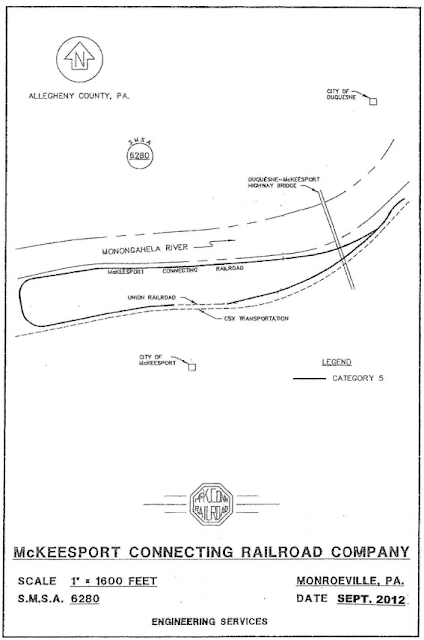 In May of 2021, the Union Railroad Company , a short line company in Pennsylvania, submitted an application to abandon "5.4-miles of switching and terminal trackage in the City of McKeesport in Allegheny County, Pennsylvania (known as the “MCR Track”). ( STB  - AB_183_5_X). This was originally known as the  McKeesport Connecting Railroad . The MCR dates back to 1899, and became part of the Union Railroad on Jan 1st, 2013. ( Location and right of way )  The abandonment request states that "No customers have been served by URR over the MCR Track for over four years, [as of 2021]. Following abandonment, URR will convey the right-of-way to DB Pipe , LLC with the MCR Track’s rail and related track material intact." While DB Pipe, LLC has no immediate plans to salvage the MCR Track, it will be responsible for such salvaging should it occur in the future." Abandonment is a very long legal process, for the reasons that existing railroad rights of way are an incredibly valua
Post a Comment
Location: 321 Locust St, McKeesport, PA 15132, USA
Read more 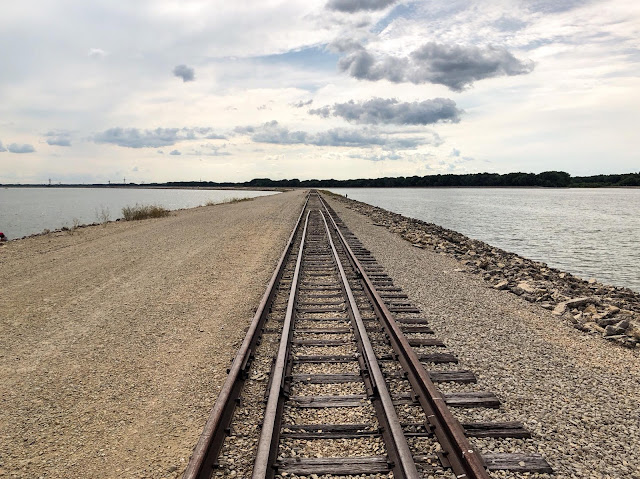 The Heidecke Lake  State Fish and Wildlife Area is best known for its fishing lake, which was built in 1978 as a cooling reservoir for the now defunct Collins Generating Station , which closed in the early 2010's. Just south and west of the property exists the nearly abandoned White-Holderman Cemetery . It's located just south of the Illinois River , east of Morris, IL in Grundy County. We visited the area a few years back on a dual mission; to fish and enjoy the great outdoors and, at least for me, to get up close and personal with some forgotten railroad tracks, which split the lake into two.  I enjoyed the great outdoors and got some pictures of this line, but no fish, not that I ever catch anything. FRRandP Photo, August 2018. The tracks are quite rusted in spots, and are a good example of what happens to tracks without proper maintenance and use. There's a certain finality that people believe when tracks are pulled up as to the status of a rail line, that it will nev
1 comment
Location: Heidecke Lake State Fish and Wildlife Area, 5010 N Jugtown Rd, Morris, IL 60450, USA
Read more
More posts