Showing posts from October, 2020
Show all

What Happened at the Train Tracks near Rentchler, IL? 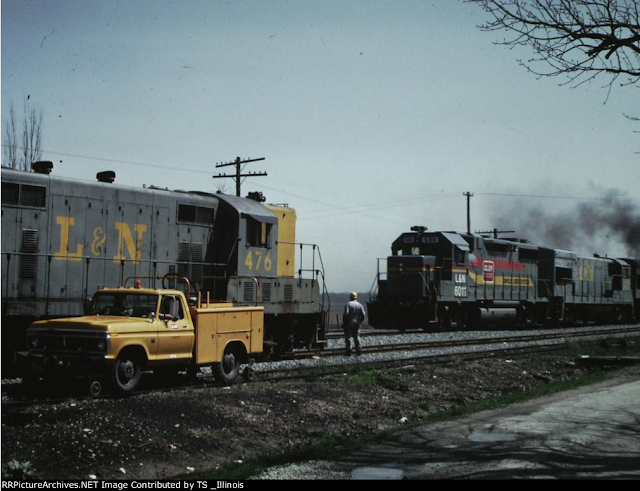 The Louisville & Nashville Railroad had a line running from Belleville to Mt. Vernon, IL (and beyond), that was abandoned by CSX from Belleville to Okawville in 1989 . ( Right of way ) Given the thousands of abandoned railroad corridors we have traced, this one generally seems pretty unremarkable. However, this particular abandoned line had an urban legend associated with it involving twin Albino boys who grew up on a farm near Rentchler, IL. Image: An L&N local meets a Family Lines through freight at Rentchler siding just east of Belleville, IL. ( RRPicutreArchives ) The story goes that these boys were bullied in school for their albinism. The bullying didn’t stop there, and the twins were tied to the tracks and left to die .  It should be noted that there is no evidence that this story happened, and indeed shares many details with similar urban legends. If you'd nonetheless like to read further into this urban legend, Rayzor has an excellent summation of the story. Look
Post a Comment
Location: Rentchler, IL 62221, USA
Read more

What Could Have Been...The Joliet Rockford & Northern Railroad 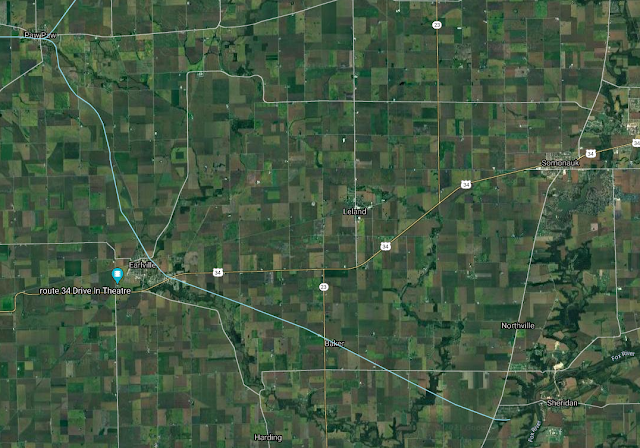 One of a number of railroad proposals that would have further tied Joliet to the railroad world, was a proposal to connect Joliet northwesterly with Rockford. The Joliet Rockford & Northern Railroad was incorporated in 1881 to connect Joliet, IL and Rockford, IL via Sheridan. Soon after incorporation, the size of the proposal was drastically reduced, and construction of a 19.5 mile branch line between Sheridan Junction (just south of Sheridan, IL) and Paw Paw, IL. Right of way of what was built, and thus later abandoned. It was completed late in 1882, and even before completion, the right of way was leased to the Chicago Burlington & Quincy Railroad , who would purchase it outright in 1899.  Joliet Rockford & Northern Incorporation The Burlington briefly had an interest in not only completing the line from east from Sheridan to Joliet, but in running another line north from Joliet to connect to Naperville. This alignment would have created a loop of Burlington lines aroun
Post a Comment
Read more

There were two Addison Railroads that operated in the United States, one in Illinois and one in Vermont, and each had no relation to the other. The Vermont Addison Railroad became part of the Rutland Railroad, and is discussed in another blog. The Addison Railroad (in Illinois) once occupied the large easement on the west side of Addison Rd between IL-64 (North Av) to just north of US-20 (Lake St) in Addison, IL, about two miles in length. Built in 1890, it was incorporated into the Chicago Madison & Northern Railroad , which itself became part of the Illinois Central by 1892. Under the IC, the short spur was simply known as the Addison Branch. Addison Railroad, 1892 . "Illinois Central Train in Addison on “Orphan Home Festival Day.” Courtesy Historical Museum of Addison." "In 1890 five Addison men formed the Addison Railroad Company, Inc. These were William Leeseberg, Louis Stuenkel, Edward Rotermund, Professor Johann Backhaus, and H. Z. Zuttermeister. Stock capit
Post a Comment
Location: Addison, IL, USA
Read more 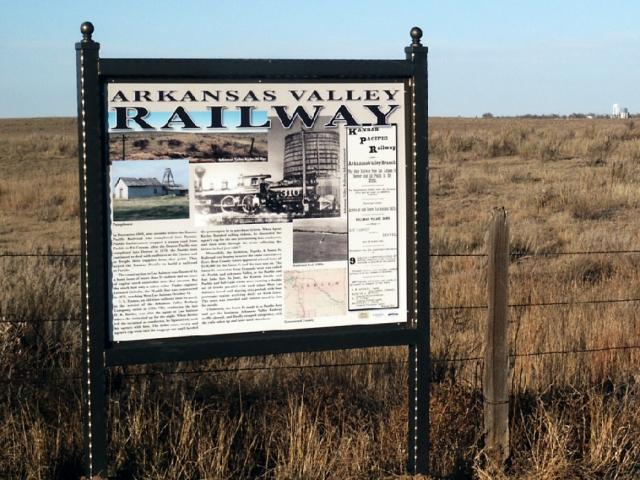 The first railroad abandonment in the State of Colorado was the Arkansas Valley Railway , built in 1872 and abandoned just five years later. ( Right of way ) Photo: Terry Blevins The AVRy was a Kansas Pacific subsidiary, and an attempt by the company to reach Pueblo, CO, after building their mainline through Colorado enroute to Denver. The line ran south from Kit Carson, CO where it met the mainline, and reached 74 miles south to La Junta. The Kansas Pacific and Atchison Topeka & Santa Fe each sent bond proposals to the citizens of Pueblo in an attempt to secure funding to build a railroad line. The AT&SF bond issue won out, leaving the AVRy to serve only the Kit Carson-La Junta route. In 1876, the ATSF finally reached Pueblo, and took nearly all freight and passenger traffic with it, thus rendering the AVRy obsolete. Just one year later, the decision to abandon the Arkansas Valley Railway would make it the first abandonment in the State. Thanks as always for reading!
Post a Comment
Location: Kit Carson, CO 80825, USA
Read more 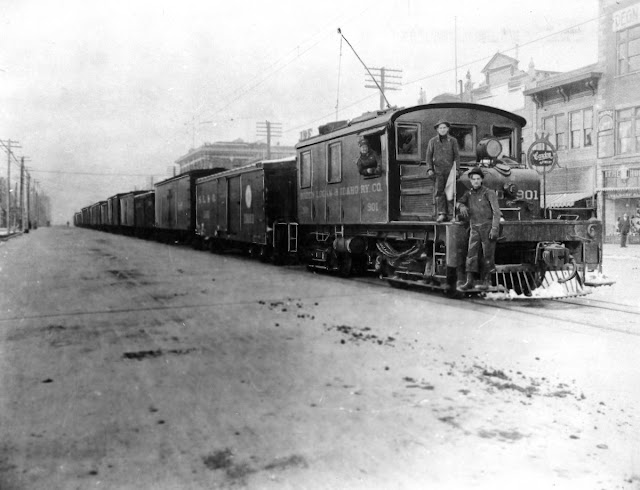 The Ogden Logan & Idaho Railway was formed from a merger between the Ogden Rapid Transit and Logan Rapid Transit companies in northern Utah in 1914. ( Right of way ) Photo: Fellows, Fred , “ O.L.I. Freight Train #901 stops on Main Street in Logan, Utah ” USU Digital Exhibits, accessed Oct 4, 2020. Among three proposals for routes between the two cities, the longest, a 64 mile line via Collinston, UT, was chosen, as it already held a roadbed for the unbuilt Utah Northern Railroad, and also served the most agricultural land. In 1915, the system ran from Ogden to Logan, before a northerly extension began the following the year. Image: J.R. and H.C.E. , “ Map of Interurban Lines in Utah , 1916” USU Digital Exhibits, accessed Oct 4, 2020. A second merger between the OL&I and the Cache Valley Railroad would commence in 1918, and the entire line became the Utah Idaho Central Railroad . This added some smaller routes to the Interurban, and created a mainline from Preston, ID to Ogd
Post a Comment
Location: Logan, UT, USA
Read more 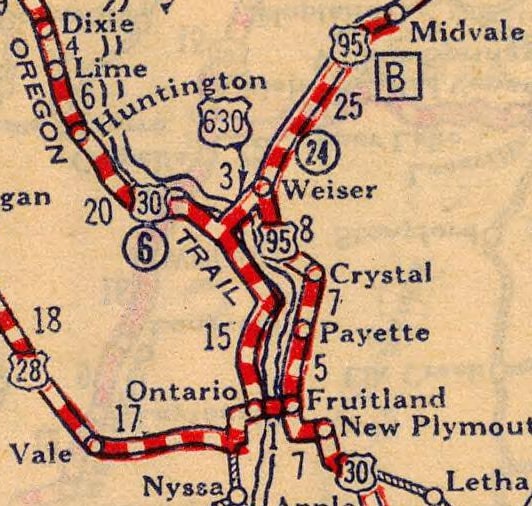 There are many US Routes that are longer than 1,000 miles in length, which isn't surprising given the size of the United States. Most 3-digit US routes are also relatively long, with the shortest one currently being US Highway 730 , between Washington and Oregon, about 40 miles long. But the shortest in history was another of US-30's children, namely  US 630 , at just roughly three miles in length, spurring from US 30 in Weiser, ID, and running south over the Snake River into Oregon. This would have made US-630 the shortest route in the entire system by a considerable margin, as US-530 , the next shortest US highway ever, was 25 miles long.  What is it with the x30 US Highways? All, with the exception of US-330 (present-day IL-38 ) were less than 100 miles in length, and 330 was only about 160 miles long. Only US- 130 and 730 remain today. Back to 630; this map shows the entirety of the three mile route. c. 1927, Rand McNally map via USEnds. It also didn't last very long,
Post a Comment
Location: Weiser, ID 83672, USA
Read more 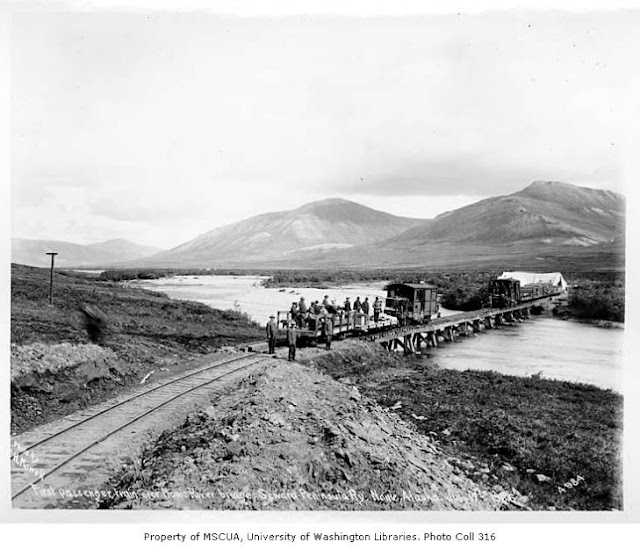 The Seward Peninsula Railway was the larger of two railroads on Alaska's Seward Peninsula, and also the more successful operation. Partly constructed from the earlier Wild Goose Railroad and Nome Arctic Railway , the line eventually ran over 76 miles northward from Nome, AK to a point known as Bunker Hill, near a village known as Shelton, AK. The line began service in 1906, supplanting the Council City and Solomon River Railroad, known as " The Last Train to Nowhere ". ( Right of way ) Image: " First passenger train over Nome River bridge, Seward Peninsula Railway, Nome, July 17, 1906 " Photo by F.H. Nowell, 4984. MSCUA, University of Washington Libraries Just north of Nome, the line was easy to construct. But the more inland the company got, the more varied the terrain was. Through the Pilgrim River and Nome Valley, the road had 128 bridges and trestles. Terminus of the Wild Goose Railroad at Anvil Creek The summer thaw also made construction treacherous, as
Post a Comment
Location: Nome, AK, USA
Read more

How Michigan and Ohio Got Part of Their Shapes: The Toledo War 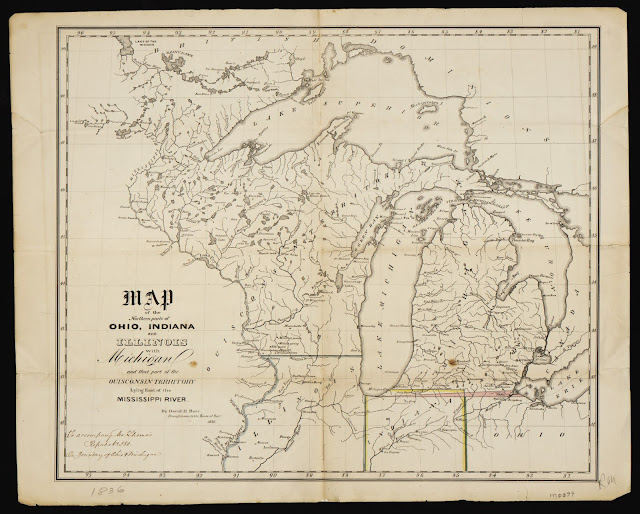 The Toledo War was a boundary dispute between the State of Ohio and Michigan Territory over the area known as the " Toledo Strip ". It emanated from a poor understanding of the location of the Great Lakes, and vague interpretations of the border between Ohio and Michigan. The area shaded in pink is the land in question. Image: Map by David Burr from U.S. House Report 380, 24th Congress, 1st Session, highlighting the contested land area between Michigan and Ohio territories ( Wikipedia Commons ) The placement of the State Boundary would determine whether the City of Toledo, and thus its Port, would lie in the State of Ohio, or in Michigan Territory. When Congress passed the Enabling Act of 1802, which authorized Ohio to begin the process of becoming a U.S. state, the language defining Ohio's northern boundary differed slightly from that used in the Northwest Ordinance: the border was to be "an east and west line drawn through the southerly extreme of Lake Michigan, r
Post a Comment
Location: Toledo, OH, USA
Read more
More posts