Showing posts from October, 2019
Show all

The Forgotten Railways of Chicago: Cemetery Spurs and Stations

If you go outside the city limits of Chicago in any direction, and you will find numerous large cemeteries occupying the land. In fact, in some cases you don't even have to leave the city. This stems from an early Chicago ordinance that disallowed cemeteries within the city limits, meaning many located just outside the city. This is why some villages, such as Forest Park and Hillside, have a larger population of dead individuals than the living . As Chicago annexed surrounding areas and grew, on occasion cemeteries that were once outside the city were now within it, even in spite of the ordinance. Chicago Aurora & Elgin car serving Mt. Carmel Cemetery in Hillside. Image: Electric Railway Review via GreatThirdRail A funeral today often consists of dozens of cars en route to a cemetery, however, how did people reach cemeteries before the advent of the automobile? Railroads provided the service, and in fact were required by law to do so. On the weekends, funeral trains
2 comments
Read more 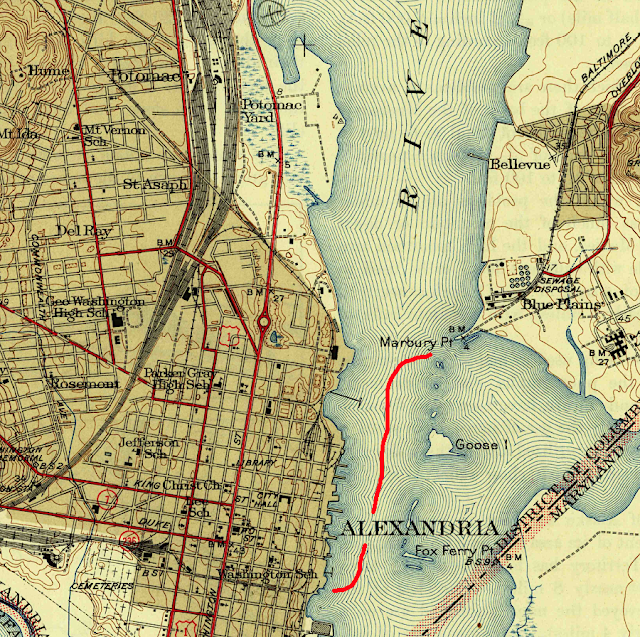 The Baltimore & Ohio Railroad was the first railroad to serve our nation's capital, Washington, DC, beginning with a branch from Relay, MD in 1835. However, the B&O would soon face competition from the largest railroads of the day, including the Pennsylvania Railroad, who was given exclusive access to the Long Bridge over the Potomac River between Washington and Alexandria, VA. Thus the B&O built the Alexandria Branch, a 12.5 mile line from Hyattsville, MD to a place on the Potomac called Shepherds Point, where a car ferry would haul traffic over the Potomac, and connect with Alexandria. Image: USGS Historic Topo Map via Virginia Places Once B&O got access to the Long Bridge , the ferry was no longer necessary. During World War II, threats of sabotage to the Long Bridge prompted the creation of a second bridge over the Potomac, this one a relocated GTW bridge, simply named the "Emergency Bridge", which once again connected the line to Alexandria. This co
Post a Comment
Location: Marbury Point, Washington, DC 20032, USA
Read more

The Town Abandoned For a Nuclear Research Facility: The Story of Weston, Illinois 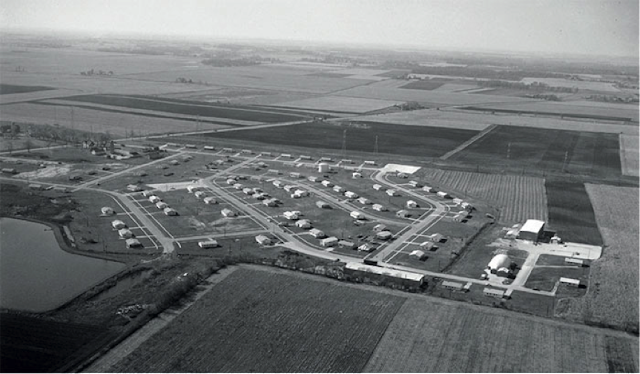 Weston, IL was a community in western DuPage County, Illinois located between present-day Batavia, Winfield and West Chicago. It was no different than the numerous other subdivisions that would soon turn into the mass suburbanization that occurred in the United States during the postwar era from the late 1940's to the early 1960's, although the aforementioned villages that surrounded were also vying for land and annexation rights to grow. Aerial view of Weston, the site for the National Accelerator laboratory in 1966. (Image: Fermilab ) At its beginning it was a small subdivision, but in the 1960’s, its developers drew up plans for a municipality of 50,000 people, complete with the largest mall in the United States and an airport, among other proposals. Weston advertisement . Image: World Abandoned The nearby villages and the county of DuPage would have no part of it. Weston was not allowed to incorporate based on a legal technicality in 1964. The developers left bankrupt with
Post a Comment
Location: Kirk and, Pine St, Batavia, IL 60510, USA
Read more

A Visit to the New Buffalo Railroad Museum 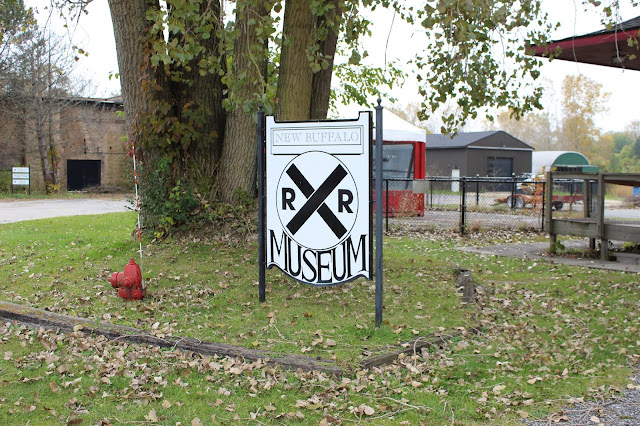 Today the Mrs. and I visited the New Buffalo Railroad Museum, a replica Pere Marquette Depot in New Buffalo, MI. The Depot is located near where the original PM station was for New Buffalo.  From the exterior, the grounds appear unkempt, and the parking lot needs work. Looks are deceiving though. This was one of the smaller railroad museums I've visited, although I highly enjoyed the little time I did spend there. There may not be any heritage operations running out of here, but they did pack a lot of history into a small space, and the potential for further renovation is quite easily visible. Adjacent to the museum is the former roundhouse used by the Pere Marquette, which was in service until 1984. The roundhouse, and its relocated turntable served none other than Pere Marquette 1225, made famous in the book and film adaptation of The Polar Express . Back of the roundhouse. Currently abandoned, it would be an amazing restoration project. A brewery perhaps? Imag
Post a Comment
Location: 30 S Whittaker St, New Buffalo, MI 49117, USA
Read more 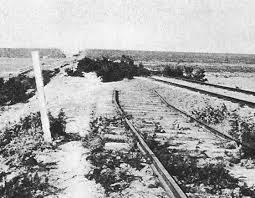 Without attempting to sound needlessly pessimistic, most railroad proposals were doomed from the start. That isn't always a bad thing , as it's important to assess the needs of the route, capital and ongoing costs in running any business. Usually if a proposal is going to be unsuccessful, the reasons are discovered in the planning, engineering, construction or completion phases before more cost is sunk into the project. There are many examples  of these unbuilt railroads all across the world. What is extremely uncommon, however, is for a railroad proposal to pass beyond each of the construction phases and  then  fail. Today we explore four examples of lines that only ran a handful of times before their abandonment. If anyone knows of any other lines with an extremely short lifespan, let me know in the comments. This list doesn't include lines that were meant to be temporary, such as those in mining or construction. 4. Rosstown Railway We begin Down Under in the s
5 comments
Read more 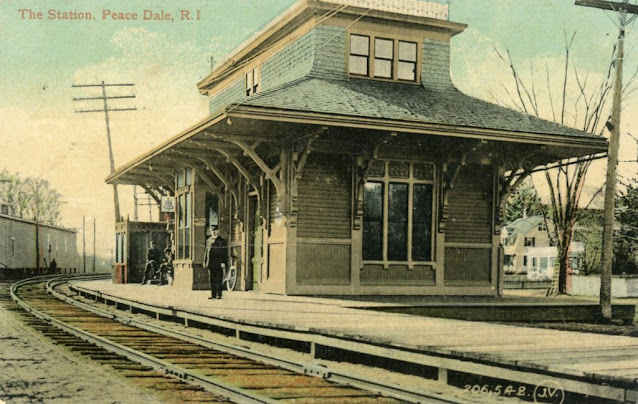 The Narragansett Pier Railroad ran between its namesake city on the southern coast of Rhode Island to West Kingston, where it connected with the New York New Haven & Hartford Railroad , beginning service in 1876. ( Right of way ) Image:  The Naragansett Pier Railroad station in Peace Dale (Sanford Neuschatz Collection) While short, its right of way between another railroad and a resort town allowed it success, carrying passengers to the Narragansett Pier, while also carrying local freight trains. Passenger service ended to the pier ended in 1953, however the Westfield Branch Lumber Company kept the right of way in service between Wakefield and West Kingston until 1981. Part of the right of way is now the William C. O'Neill bike path .
Post a Comment
Location: Narragansett, RI, USA
Read more 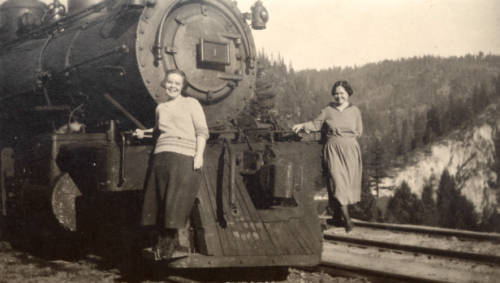 The Indian Valley Railroad was the name of the fictional railroad line that ran in the children's show " Shining Time Station ". But the fictional line actually shared its name with a real railroad line , which ran between the Western Pacific Railroad at Paxton, CA and Engle Mine, about 20 miles northeast. ( Right of way ) "View of two unidentified women standing on an Indian Valley Railroad locomotive in Paxton, Plumas County c. 1940." California State University, Chico archives. It began running in 1917 to transport copper from the mine, but began carrying passengers from Paxton shortly thereafter. Image: " View of an Indian Valley Railroad locomotive  on August 10, 1937, location is unknown". Meriam Library. California State University, Chico A townsite called " Englemine " was platted nearby the end of line. However when copper prices dropped, the mine was no longer profitable, and the railroad as well as the town were abandoned in 1938
Post a Comment
Location: Paxton, CA, USA
Read more

The Artesia, El Paso, and Mexican Railroad: An Unbuilt Swindle

The Artesia, El Paso, and Mexican Railroad was chartered in 1906 to connect Hope, NM with Artesia, 20 miles east, and the rest of the US rail network. Between the 1860's and the first World War, there were thousands of railroad companies formed to complete railway lines all across the United States and beyond. Many, however, never laid any track, and the Artesia El Paso & Mexican is an example of this. Like many projects, it was the product of necessity and optimism. "One problem faced by farmers in Hope was the difficulty of transporting their goods to market, where they could then be shipped by railroad to other parts of the country. The nearest railroad depot was located approximately 20 miles away in Artesia, and farmers were forced to hitch wagons together and make the slow and difficult trek to sell their crops. A railroad spur linking Hope to Artesia was viewed as a critical necessity to the lasting prosperity of the community. In 1906, plans were drafted for a rail
Post a Comment
Location: Hope, NM 88250, USA
Read more 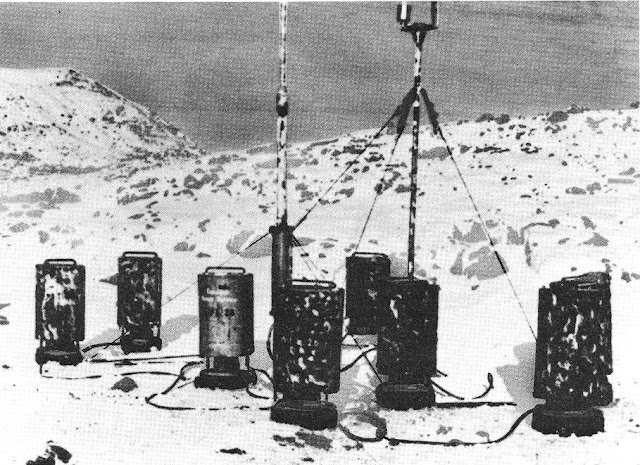 Weather Station Kurt , located in far northern Newfoundland and Labradour, Canada is the only known World War II military installation conducted by Germany on the North American continent, built in 1943. German Weather Station Kurt set up on the Hutton Peninsula, Labrador, Dominion of Newfoundland on 22 October 1943 (Bundesarchiv) Based on how weather patterns move across the world, mostly from west to east in the Northern Hemisphere, having accurate weather data provided the Allies an inherent advantage in the European theater, and the weather station was a German attempt to gather their own weather data to counteract this Allied advantage, using telemetry systems and radio transmitters. Several other weather stations in the arctic were planned, with at least two others planned to be deployed on land in North America, but this was the only successful (or at least discovered) weather station. Empty American cigarette packets were left around the site to deceive any Allied personnel tha
Post a Comment
Location: Hutton Peninsula, Division No. 10, Subd. E, NL A0P, Canada
Read more
More posts