Showing posts from July, 2020
Show all

The Forgotten Railways of Silverton, Colorado 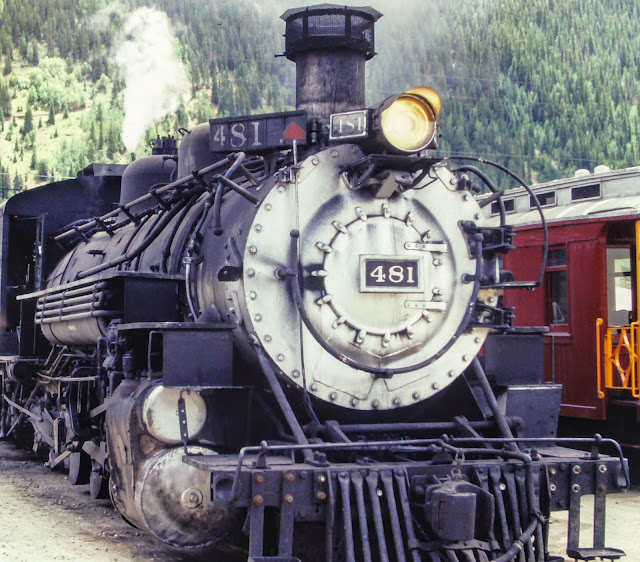 While Silverton, CO is most famous as the terminus for the Durango & Silverton Narrow Gauge Railroad , the town was a terminus for three abandoned railroad lines which ran to points north. During the operation of these lines, the Durango & Silverton was the Denver & Rio Grande's Silverton Branch , which came into service in 1882. Nope, not this one! Image: D&S 481, c.1980. Forgotten Railways, Roads & Places Photo Collection The Silverton Railroad ran from Silverton to Ironton, CO between 1888-1926. It, along with the other two abandoned lines discussed in today's blog were owned by Otto Mears to reach various mines in the area north of Silverton. According to DRGW.net, "Mears' intention for the Silverton Railroad was to eventually reach Ouray. The sheer ruggedness of the north slope of Red Mountain Pass made the route very hostile to railways. Mears' originally surveyed route - his toll road - had sections of 19% grade, making it very uns
Post a Comment
Location: Silverton, CO 81433, USA
Read more

The Old Colony and Newport Railroad 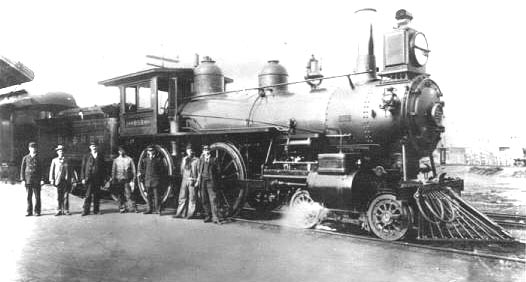 The Old Colony and Newport Railwa y was the product of a merger between two railroad charters in Rhode Island and Massachusetts. The Old Colony and Fall River Railroad merged with the Newport and Fall River Railroad, which had chartered a railroad running from Newport, RI to the Massachusetts state line. This merger allowed the line to continue to Fall River, MA, which it began doing so in 1864. Steam engine along the Newport Branch. Image: Old Colony & Newport Railway In 1865, with the acquisition of the Dighton and Somerset Railroad , provided a direct connection to Boston via Braintree, MA. It, along with Cape Cod Railroad , merged in 1872 to become the Old Colony Railroad , which it remained until the company was leased to the New York New Haven & Hartford in 1893. Image: "Two ladies are waiting at Middletown Station for the train to Newport." Trains Rhode Island Traffic along the Newport Branch began to decline post World War I. Bus and automobile
Post a Comment
Read more

Desert Bus: The Most Realistic Video Game of 1995 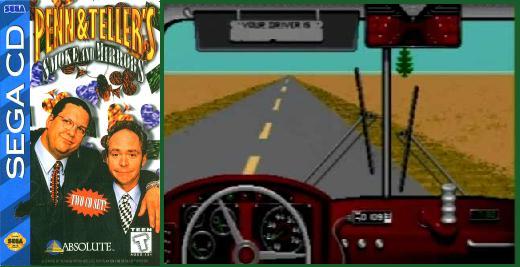 During the early 1990's, a moral panic ensued about sex and violence in video games and television. Games like Mortal Kombat and Night Trap  pushed societal boundaries, in part because of how realistic each game looked. Sexually explicit and violent video games had existed since the Atari days, but in all of their 16-bit glory, these now were perceived as corrupting a generation. Of course, these were outliers among most video games of the day, and in retrospect, did not really impact society, outside of being a catalyst for the creation of the ESRB . At the same time, a collection of games was being developed by entertainers Penn & Teller , known as Penn & Teller's Smoke and Mirrors ". The game included six mini-games, five of which were designed to trick players and their friends, much like the duo themselves. Smoke and Mirrors  box art and a screenshot for Desert Bus. But the sixth game, Desert Bus , was a commentary against those who believed video gam
1 comment
Read more 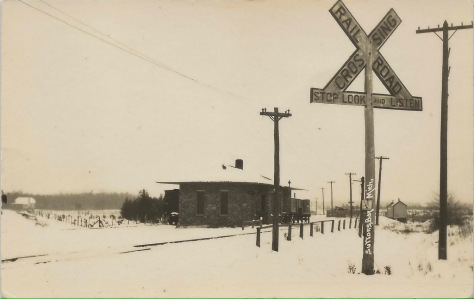 The Traverse City Leelanau and Manistique Railroad was a railroad line built by the Grand Rapids & Indiana Railroad to built north from Traverse City, MI. Service ran north to Northport, MI beginning in 1901, and via a railcar ferry over Lake Michigan, connected to Manistique in Michigan's Upper Peninsula, with ferry service starting two years later in 1903. The ferry used a ship known as the Manistique for its journey between Northport and its namesake city. Sutton's Bay Depot, c.1920. Image via ExploreVistas In January, 1908, the Manistique sank in the harbor. It was temporarily replaced by an Ann Arbor car ferry but the ferry operation was discontinued in 1908. (Michigan Railroads) A picture of the Manistique Ferry. Image: Michigan Railroads In 1919, the line was reorganized as the Manistee & Northeastern Railroad , which served passenger and freight operations until 1955, when those were assumed by the Chesapeake & Ohio. Freight service declined
Post a Comment
Location: Suttons Bay, MI 49682, USA
Read more 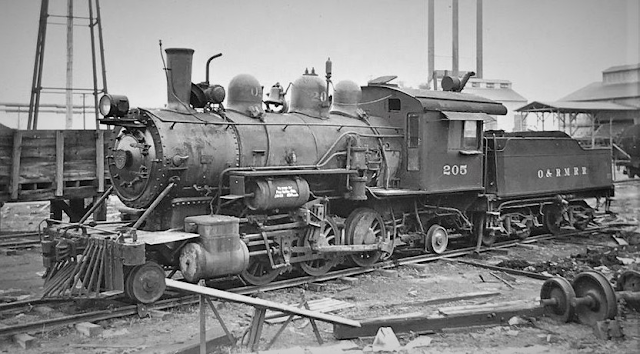 The  Oklahoma & Rich Mountain Railroad  ran from Page, OK to Pine Valley, OK, presently known as Muse. Operations began in 1926 along the 17 mile route. O&RM RR 205, Unknown Photographer via Pinterest While almost exclusively a logging railroad owned by the Pine Valley Lumber Company, a subsidiary of the Dierks Lumber & Coal Company, it was nonetheless a common carrier, and did have passenger service along its route, connecting passengers to the rest of the US rail network via its connection to the Kansas City Southern Railway at Page. A.W. Goke and C.A. Hollopeter. 1931. Soil survey of LeFlore County, Oklahoma [map] via Texas Transportation Archive . At the end of the line was Pine Valley , a town built by the company, encompassing a significant investment, but also reaching a population of roughly 1,500 during the profitable years of the company. Oklahoma & Rich Mountain Railroads third motor bus #1 at Pine Valley, Oklahoma in 1937. Image via Pinteres
Post a Comment
Location: Muse, OK 74949, USA
Read more 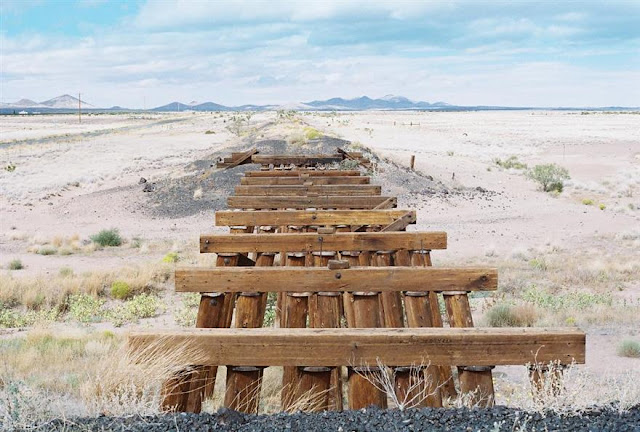 The El Paso & Southwestern Railroad ran in the southwestern United States and northern Mexico during its existence. Constructed in the late 19th and early 20th century, the railway owned and operated many lines that connected to the mining industry. ( Right-of-way ) Image: Paul McGuffin, 2010, via Abandoned Rails . In 1912, the main line reached its full extent, extending from Tucson, AZ to El Paso, TX. The collapse of copper prices following World War I greatly affected the railroad,  and it was leased to the Southern Pacific Railroad in 1924. The SP used the EP&SW as a parallel main line to their own Transcontinental Route, dubbing it the "South Line".  EP&SW 168 at El Paso, TX. 1/21/1949. Image: Otto Perry via American-Rails The South Line handled both passenger and freight trains, and remained profitable through its existence. Nonetheless, the Southern Pacific chose to abandon much of the South Line in favor of a single mainline between Tuscon-E
Post a Comment
Read more

The Kinkora Branch of the Pennsylvania Railroad 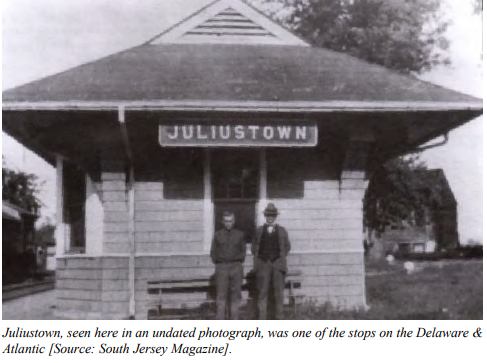 The Columbus Kinkora & Springfield Railroad was chartered in 1870 to connect New Lisbon, NJ with Kinkora, NJ, 14 miles northwest. The right of way followed the earlier Delaware & Atlantic Railroad, a much earlier rail line ran along a similar right of way, first surveyed in 1827. ( Right-of-Way ) Image: New Jersey Department of Transportation Constructed and in service by the end of 1838, "the line used mule drawn carts riding on iron strapped wood rails primarily to haul wood and charcoal between New Lisbon and Kinkora." ( Springfield Township Historical Society ) The line was abandoned at an unknown date before 1870, and the CK&S used its right of way. Almost immediately after the Columbus Kinkora & Springfield Railroad was completed, it was leased in perpetuity to the Pennsylvania Railroad, becoming the Kinkora Branch after a complicated series of mergers, acquisitions, and bankruptcies early in its existence. It officially opened in 1872. Im
Post a Comment
Location: Kinkora, Mansfield, NJ 08505, USA
Read more 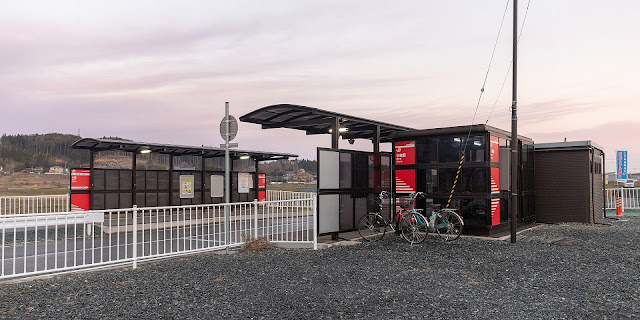 After the 2011 major earthquake and tsunami that devastated Japan, many rail lines were compromised, leading to the abandonment of several, especially in rural areas, particularly in the Iwate and Hokkaido prefectures. One example of this was the Ōfunato Line , where the right of way was destroyed north of the Kesennuma Station. The line was part of the Japanese National Railways system, which was privatized into regional companies after 1987. After privatization, the line was owned by the East Japan Railway. Image: Otomo Station. 2018 by Yasu, Wikipedia Commons. Most of the destroyed stations saw less than 200 passengers per day, and thus the rail line was abandoned and converted into a busway in 2013 between Kesennuma and Tamoyama, a distance of about 28 miles. Here's the line on our Abandoned & Out-of-Service Railroad Lines Map . The orange line to the south, which ran from Kesennuma to Yanaizu, was also abandoned for similar reasons. The line was originally opened in sec
Post a Comment
Location: Otomo Station, Shimoniida Otomochō, Rikuzentakata, Iwate 029-2207, Japan
Read more

The Maryland & Pennsylvania Railroad was an independent line that ran from Baltimore, MD to York, PA, beginning service in 1901. Meandering through the hills, it was a 77 mile long route, despite the two cities only being 45 miles apart the way a crow flies. ( Right of way ) The "Champagne Special" crossing the Sharon Trestle - Sept. 14, 1947. Image:  Maryland & Pennsylvania Railroad Preservation Society. The "Ma and Pa" as it was known informally was formed from two earlier narrow-gauge railways ; The Baltimore & Delta Railway, which became the  Baltimore and Lehigh Railway, and the York and Peach Bottom Railway, which became the York Southern. As neither was profitable, they merged to combine the route into one, and re-gaugued the right of way into standard gauge. Despite automobile competition, the railway began to be profitable post-merger, and continued to be up until the Great Depression. World War II would cement profits once again, bu
Post a Comment
Read more 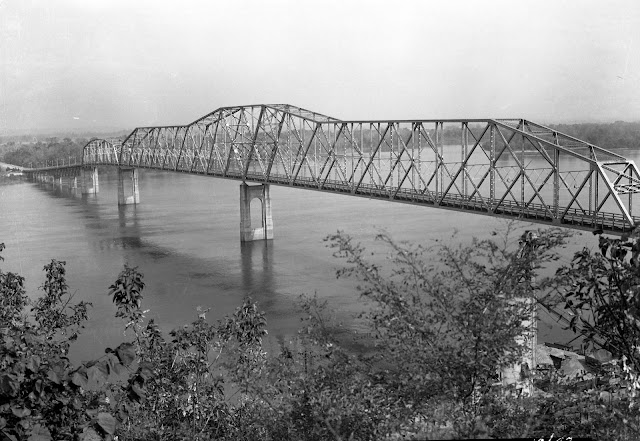 The Mark Twain Memorial Bridge spanned the Mississippi River, connecting Hannibal, MO with the State of Illinois at Aladdin. The bridge was a Public Works Administration project, opening in 1936, coincidentally as part of US Highway 36. Image: Missouri State Archives via  BridgeHunter Before the bridge was built, automobiles could cross the Mississippi River at the nearby Wabash Bridge, which was built, and remains, as a railroad bridge.  Image: MODOT 1940 Map Originally opening as a toll bridge, the tolls were removed in 1940.  Caption by Lisa Ruble, "Hugh M. Richards crosses the Mississippi River and enters Illinois with his REO tractor, December 1946. Hugh is pulling 32' Fruehauf trailer #4538 in the service of Pacific Intermountain Express and is enroute to Chicago on US 36. Hannibal, MO is visible in the background. Hugh normally meets his fellow Owner Operator relay drivers in Pittsfield, IL, but on this occasion Hugh has ventured into Missouri to assist Wayne Thrasher,
Post a Comment
Location: Mark Twain Memorial Bridge, Hannibal, MO 63401, USA
Read more

The World's First Suspended Coaster: Way Older Than You Think 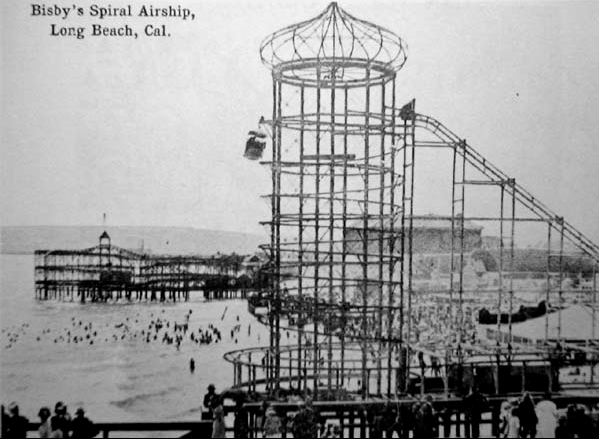 Most amusement park enthusiasts point toward the original Bat at King's Island as the world's first, permanent, suspended roller coaster. And in the modern era, this is true, as it ran from 1981-1983. But the world's first suspended roller coaster was actually built roughly 80 years before The Bat, at the Long Beach Pike in Long Beach, CA. Known as Bisby's Spiral Airship , it was built in 1902. Bisby's Spiral Airship. Image: Historical Society of Long Beach The ride consisted of square gondolas that were lifted to the top of a monorail track, then coasted down a very long helix. The gondolas could swing freely, and centrifugal forces would make the cars swing outward before returning to the station. Little is known about the ride's demise, but it was removed around 1915. Long Beach Pike was renamed Nu Pike in 1949, and later became Queen's Park in 1971 before closing in 1979. In 2003, the area was redeveloped as The Pike at Rainbow Harbor , a shopping mall
Post a Comment
Location: Long Beach, CA, USA
Read more

You Could Easily Walk From One End of Indiana 520 to the Other. But Please Don't. 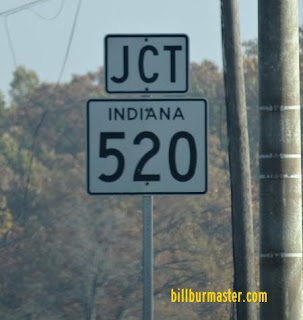 The Town of Pines, Indiana , is sandwiched between two very long US Highways; US-12 to the north and US-20 to the south. While most roads in the Town connect the two routes in some way, the widest of which, Maple St, is signed as IN-520 . Image and history: Bill Burmaster It is only about 1,300 feet in length (officially listed at 0.248 miles per INDOT), making it the shortest signed route in the State of Indiana, and one of the shortest in the entire United States. Even stranger, it is four lanes throughout its length, making it possibly the shortest four lane highway in the world. The IN-520 designation for the connector has been in place since at least 1964, and is still signed today. Interestingly, while Maple St is the widest road in the Town of Pines, it is not the longest, yet is the only one maintained by the state.
Post a Comment
Location: Town of Pines, IN 46360, USA
Read more
More posts