Showing posts from November, 2020
Show all

This is an article from Engineering News printed originally in 1915. (Vol 74, no. 13). I believe its interest required it to be preserved in the digital form, so that's what this blog is about. Hope you enjoy! Car Transfer Ferry on the C. B. & Q. RR In order to develop a new rail route from the Northwestern States to the Gulf, the Chicago, Burlington & Quincy R.R. is building a line 13 mi. in length from its present terminal at Metropolis, Ill., to connect with the Nashville, Chattanooga & St. Louis Ry. at Paducah, KY. The principal engineering feature of this line will be the great double-track bridge across the Ohio River, but this will not be completed for some time. [Interestingly, the only bridge over the Ohio near Metropolis is currently only single tracked as of 2020] To provide immediate communication across the river, the new railway has been extended down the bank on each side of the river, and cars will be ferried across on transfer boats. These are double-tr
Post a Comment
Location: Metropolis, IL, USA
Read more

Kaskaskia, IL: From Illinois' First Capital to near Ghost-Town in Missouri 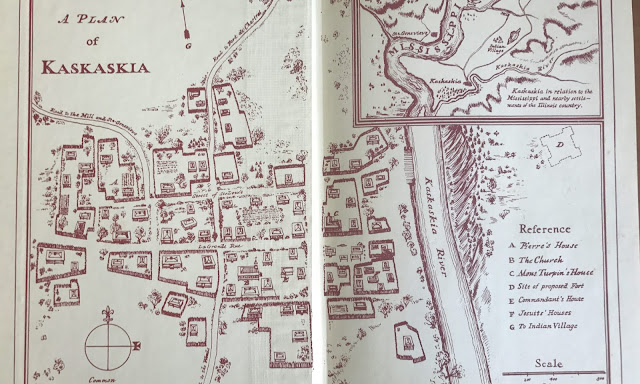 The City of Kaskaskia was the capital of the Illinois Territory, and first capital of the State of Illinois when it was admitted to the Union in 1818. Originally inhabited by Native Americans for thousands of years, it was first settled by Europeans in 1703, when French fur traders and Jesuit missionaries began settling there . Image: An early plan of Kaskaskia. ( University of Illinois at Urbana-Champaign ). Note, this was before the Mississippi River changed course. The city's peak population was roughly 7,000, before the capital was moved the year following statehood, 1819, to Vandalia. Located on the Mississippi River, the city was prone to flooding, exacerbated by deforestation. Steamboat crews cut trees in the area for wood burning. This furthered erosion, which would lead to the Mississippi River switching channels during a series of 19th century floods. The original location of Kaskaskia became an island, surrounded by the Mississippi River. The flood of 1881 destroyed all
Post a Comment
Location: Kaskaskia, IL 62233, USA
Read more 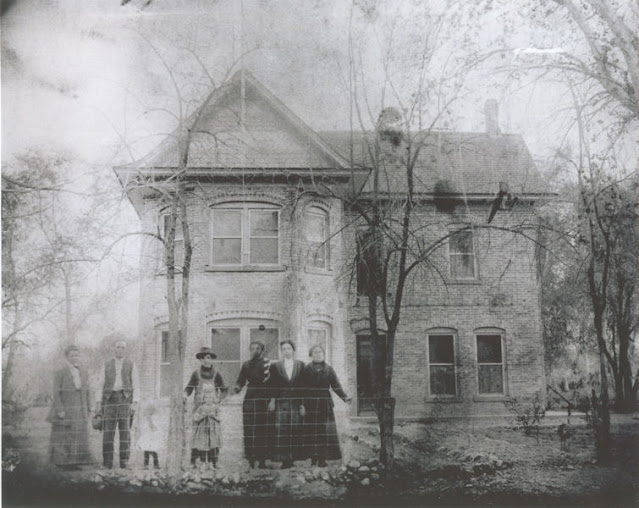 St Thomas, NV is a ghost town that was abandoned in the 1930's as the land it occupied was to be dammed with the creation of Lake Mead. Although its heyday was long over by that point. "In 1935, the Nevada town of St. Thomas, which included the Gentry Hotel, began to slowly disappear under the rising waters of Lake Mead after the construction of the Hoover Dam." Photo: The Gladys Gentry Collection. ( WEF Highlights ) Founded by Mormons in 1865, it was nearly abandoned six years later when a new survey commissioned had put the town within the borders of the State of Nevada, as opposed to Utah or Arizona. Nevada wanted back taxes from the settlers, and most refused to pay. ( Location ) Image: "Ruins exposed after being submerged under Lake Mead for many years" Daniel Jost, Wikipedia Commons The townsite had a cemetery, and the graves at the cite were relocated to nearby Overton, NV.  The last resident, Hugh Lord, left the town in 1938, setting his house on fire in
Post a Comment
Location: St Thomas, NV 89040, USA
Read more 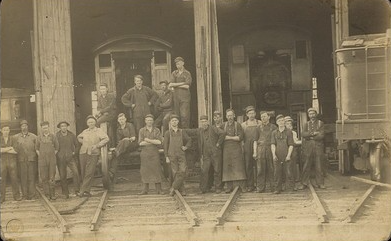 The Wisconsin & Michigan Railway was the 1893 brainchild of John N Faithorn, A Chicago railroad tycoon with financial backing to build a road that would connect the iron-rich Upper Peninsula of Michigan, with the steel mills in Chicago and other Great Lakes cities, using both railroads and car ferries. ( Right-of-Way Map ) Image: "Employees of the Wisconsin and Michigan Railway at the Round House in Peshtigo Wisconsin." In spite of the global Panic of 1893 , funding from John Bagley among others meant construction began on the line, regauging the Ingalls White Rapids & Northern Railroad to standard gauge to incorporate into the new right of way. Eventually the line connected Iron Mountain, MI with Peshtigo, WI, using surplus rail from the 1893 Chicago World's Fair, and with trackage rights on the Milwaukee Road at Marinette, WI would have ferry access, which began in 1895. In 1908, the railroad reached its maximum size, with a few branch lines primarily used for
Post a Comment
Location: Peshtigo, WI, USA
Read more 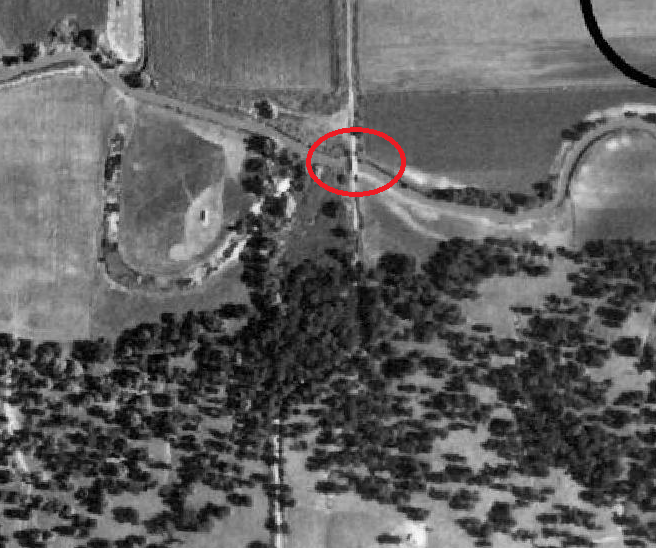 Today I'm going to discuss something a little more obscure within the Village of Bolingbrook's history, namely its demolished vehicle bridge over the East Branch of the DuPage River , where today a Trout Farm operated by the village Park District operates.  As a kid, I always imagined a bridge that would have extended over the river at that spot, and connect to the area across from it, which  as of 2015  is exactly what it does today, but the only other bridge near there appeared to only be used for river maintenance, as it was closed to the public.  But when I'd first gotten the opportunity to view historical aerial imagery of the town, I felt vindicated learning that there was a  much  earlier bridge across the river. And you can even see scars of it today. Will County GIS Data 1939 Aerial Image. It's known as Hidden Lakes today, and it's a perfect description for the area. You wouldn't notice it looking at the general topography of the area, and Illinois a
Post a Comment
Location: Trout Farm Rd, Bolingbrook, IL 60440, USA
Read more

The Forgotten Railways of Chicago: The Columbian Intramural Railway 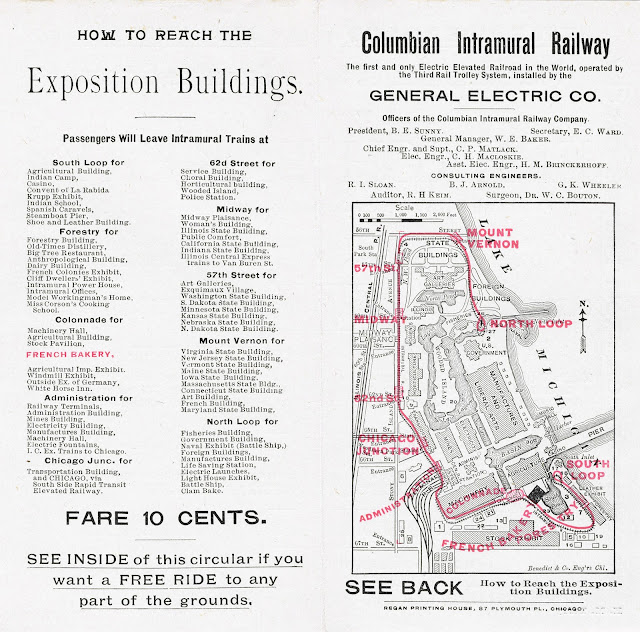 In 1893, the City of Chicago hosted the World's Fair, and paid homage to the 400th anniversary of Christopher Columbus " discovering " the New World of North America. Far more than any involvement the memory of Columbus had, the Exposition was among the most iconic events in Chicago history. After all, one of the stars on Chicago's Municipal Flag commemorates the event. Held in the South Shore, Woodlawn, Hyde Park and Jackson Park neighborhoods on Chicago's South Side, one can see evidence of the Exposition even today, as the Museum of Science and Industry currently occupies part of where it was held. The neoclassical architecture of much of the expo led to Chicago being referred to as the "White City" before the nickname "Windy City" took hold. The event was intertwined in success for showcasing the city, but also of a serial killer, expertly portrayed in Devil in the White City   by Erik Larson. The expo's impact on architecture and th
Post a Comment
Location: 5700 S Lake Shore Dr, Chicago, IL 60637, USA
Read more 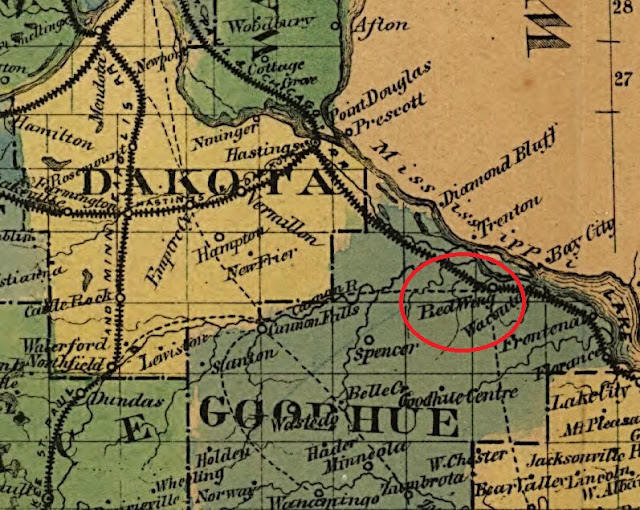 The Cannon River in eastern Minnesota was the site of a near railroad war between the upstart Minnesota Central Railroad, and the much larger Milwaukee Road, who owned virtually all freight traffic in the area, and wished to keep it that way. Red Wing on the Milwaukee's River Division. Image: "Township and railroad map of Minnesota published for the Legislative Manual, 1874.",  Library of Congress . In the 1870's, Red Wing, MN was cut off from railroad traffic as the Milwaukee had built a line between the Twin Cities and Chicago via Northfield and Faribault, leaving Red Wing without any service west, although the River Division ran through the town. Red Wing petitioned the Milwaukee Road to connect to the town via Cannons Falls, but as they owned all the rail traffic in the area, they were uninterested in expansion. That was until the Minnesota Central Railroad was incorporated in 1881, intending to connect Red Wing to Mankato in 1883. It was at this point that the M
Post a Comment
Read more

I haven't really discussed much about the CTA 's rail lines and its history on this blog for two reasons. One is that many historians and the Illinois Railway Museum have done a tremendous job of preserving its history, as well as discussing it and the other interurban lines around Chicago in various blogs, most notably The Trolley Dodger and the Chicago-L , among others.  The second, and probably larger reason, is that the entire system's history is actually quite complex; what is now composed of a system of color-coded lines comes from several different systems and branches that have merged into the CTA over time. I do my best not to discuss things I'm not certain about, and of course if I'm wrong about the slightest fact, an army of railroad historians will be rushed to my location to correct me as soon as humanly possible. Image: Kostner Station from the Eisenhower Expy. Google Street View  Image But after driving into the city for the better part of the last
Post a Comment
Location: Chicago, IL, USA
Read more
More posts