By FRRandP April 08, 2018
As the 19th Century progressed, the railroad industry enjoyed a monopoly on the long distance travel within the United States, and most other countries. The railroads opened the West to development, travel, and communications with the developed East. In many cases, the railroad industry was directly responsible for developing towns west of the Mississippi River, having been given land grants by the United States, and passing those lands onto would-be travelers looking to settle on the land, giving another reason for people to move out west.

Yet the 20th Century saw the rise of the automotive industry and roadway development, and suddenly the railroads weren't the only way to get somewhere. Many towns that had been planted the century before were progressing and growing. Many more had disappeared off the map entirely. The industry needed new ideas to stay relevant with regard to passenger traffic.

The link between the amusement park industry and the railroad industry actually goes back much farther than that, however. Just the second operating railroad in the United States (after the B&O Railroad), the Mauch Chunk Switchback Railway was a small coal operation in Pennsylvania which began operations in 1828. In the 1840's, it began taking passengers up and down the hilly terrain in a precursor to the modern roller coaster, and developing technology such as an anti-rollback device, preventing cars full of people from falling backwards up the journey. Abandoned in 1932, it is now the Switchback Railroad Trail.
But the railroads had an ace up their sleeve. The sheer beauty of the West sold itself as a vacation destination. Yellowstone Park, Glacier National Park, Arches National Park, the Grand Canyon, and many others were only accessible by rail, or at the very least required driving through extremely rough terrain and roads engineered by early 20th Century traffic standards. The aforementioned parks would all be organized into the National Park System of the United States, by an act signed by President Woodrow Wilson in 1916. In 1922, Union Pacific created an all-inclusive circle tour, designed to traverse many of the National Parks. The preservation and promotion of the National Parks had a big sponsor in the railroad industry.

These were long distance trains, however, and smaller operations also used amusements on a smaller scale to replicate the success that the National Park System had on the railroads. Interurban lines often would create parks along their routes to drive traffic, which often operated at a loss. The real estate interests were where the real money was made, and thus many of these parks have long since closed down.  One example of a surviving park is Ravinia Park in Highland Park, Illinois, which is still around today as the largest outdoor music festival in the United States. The brain child of the A.C Frost Company, the park was designed to lure visitors onto the Chicago & Milwaukee Electric Railway, which would later become the North Shore Line. While the line would ultimately be abandoned in the 1950's, Ravinia was created in 1904 and still attracts tons of visitors today. In fact, a benefactor of this park was also the Chicago & Northwestern Railway, and later the Union Pacific, as trains still stop at Ravinia Park today on Metra's Union Pacific North Line.

Another park that survives and thrives today which owes its existence to railway investment is Kennywood, in West Mifflin, PA. This theme park was founded in 1898 as a trolley park that was begun by the Monongahela Street Railway Company. While the line is long gone, Kennywood is still around, and still maintains the charm of an earlier 20th Century theme park with many classic coasters still in operation, right next to more modern thrills. Phantom's Revenge is one of the best steel coasters on the planet, and Jack Rabbit, Racer and Thunderbolt are three classic wooden coasters that survive today from the 1920's that are still thrilling guests.

What was built as Lake Park on the shores of the Great Salt Lake by the Denver & Rio Grande Western
in 1886 eventually became Lagoon Amusement Park which is another railroad amusement park that managed to survive to this day. The original park literally dried up as the Lake's water levels dropped. The park was moved about a mile east to its present location. Simon Bamberger purchased the assets of the park from the D & RGW and used the new park to drum up business on his competing Bamberger Railroad, which ran between Salt Lake City & Ogden, UT.
While his line is abandoned, rail service between Salt Lake and Ogden is now served by Utah Transit Authority's Frontrunner trains, and Lagoon is still easily accessible by rail and public transit. The park has one of the oldest roller coasters in existence, the aptly named Roller Coaster, which is both Utah's only Wooden Coaster, and has been around since 1920, despite being partially destroyed in a fire in 1953, as well as Jet Star 2, one of the two remaining spiral lift coasters in the world. 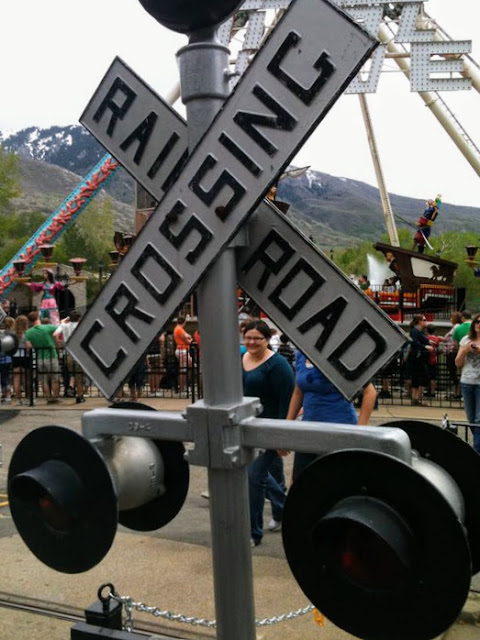 Minerva Amusement Park in Columbus, OH was not as successful a venture as Ravinia or Kennywood was and are. Built by the Columbus Central Railway Company as a destination for the Columbus to Westerville line, it had a casino as well as a theater for Vaudevillian shows, a boat ride, a museum, and Scenic Railway, one of the first Roller Coasters in the World. Unfortunately, the park only lasted for seven years between 1895-1902.

The interurban line didn't fare much better; it too was abandoned in 1930.

Of course, if there's an attraction that already exists, it also made sense to build a way to get to it. Such was the case for the Hummelstown & Campbelltown Street Railway, which connected its namesake cities with Derry Church, PA. Derry Church would later be known as Hershey, PA, named after Hershey Chocolate. Milton Hershey, the founder of the chocolate factory, sponsored the development of the trolley line to allow his factory to grow. The trolley line would connect to others that would provide a link to Harrisburg, PA. As the factory grew, so did the railway line, and so did Hershey. In what might be the most successful theme park on this list, in 1923, Hersheypark was built as a direct result of the success of Hershey Chocolate. Today it is a major amusement park with one of the most impressive Roller Coaster collections in the country.

There are hundreds more examples of theme parks which owe their existence to the railroad industry, as the two are somewhat intertwined, especially in their beginnings. For the Interurban, amusements and resorts both created traffic and improved property values, which largely was how the companies became profitable. For the long distance routes, the National Parks and the scenic beauty of the US also play an important role in keeping people moving, and tickets being purchased. Nowadays, the theme park industry is self-sustaining, and passenger trains are rarely used for transportation to them. That being said, Amtrak still offers National Park vacations, and many long-distance trains, such as the Empire Builder, stop near National Parks.
Thanks as always for reading!