The Forgotten Railways of Clarinda, Iowa

As I discussed previously with the fate of Anthony, Kansas, there exists other towns in the United States that have been completely separated from the US rail network after having several lines pass through their town, as the railroad network across the United States, and the world, has been rationalized and consolidated over time, leaving me with an incredible amount of data to map.

With that in mind, we come to Clarinda, Iowa, county seat of Page County, who was host to five different railroad lines in the city, with at most four running through the town at any given time. Between 1872 and 1911, these lines were built, and in one case, abandoned shortly thereafter.

Today, Clarinda is a case of a county seat that no longer has rail service.

In 1872, the first railway in Clarinda was built north to Villisca, IA as the Brownville & Nodaway Valley Railway to connect Clarinda with the Burlington & Missouri River Railroad at that location. Two years later, it was leased in perpetuity to the Chicago Burlington & Quincy Railroad, and the line became the Clarinda Branch. In 1879, this line would be extended south into Missouri. This same line would end service in 1960, before the CB&Q became part of the Burlington Northern Railroad.

A very short lived line was the Clarinda & St Louis Railway, which mostly paralleled the Chicago Burlington & Quincy line between Clarinda and Roseville, MO, about 26.5 miles south, just east of Burlington Junction. Completed in 1879, it was pretty clear that it was probably an unnecessary redundancy of the CB&Q service.

"Although Clarinda was on a branch of the Burlington, the town wanted another railroad. In the late 1870’s it had hoped the Wabash’s line to Council Bluffs would pass through Clarinda. Instead, the Wabash veered to the west through Shenandoah whereupon the citizens of Clarinda helped finance the old Clarinda & St. Louis Railway, which was built from Roseberry, Missouri, under Wabash auspices. But after a decade of checkered existence the track was taken up in 1890." (Donovan, 1964) 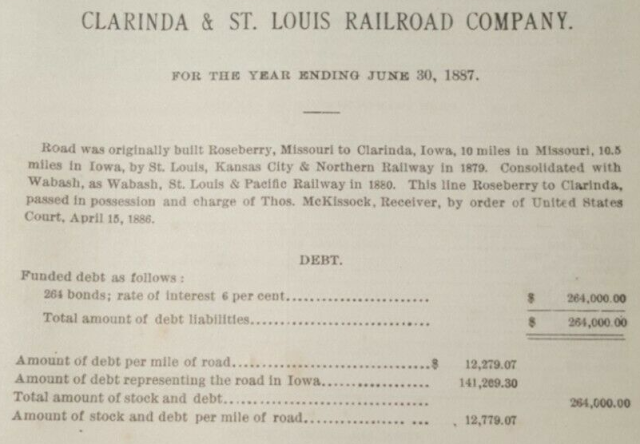 In those days, railroad companies were much smaller than they are today. To illustrate this fact, the Interstate Commerce Commission first listed Class I railroads in the 1910's, counting over 110 at the beginning. Just seven exist today, and that may change to six with the proposed Canadian National/Kansas City Southern merger. This is all to say that competition was much more rampant between railroads in those days, and the Burlington route had a near monopoly in the region, which is why Clarinda was so keen on having a Wabash connection, and helping to finance another railroad in the region, even after the failure of the Clarinda & St. Louis.

The next line would have an even shorter run, however.

The I&S connected Clarinda with Blanchard, IA, immediately north of the Iowa-Missouri State Line, where it connected with the Wabash Railroad. The railroad was built later than many other ventures, with construction first beginning in 1910, during a time where the electric interurban was gaining a foothold in the railroad market. As such, there was initially a question as to whether the I&S would be a steam or electric operation, with steam winning out as a cheaper to construct alternative.
The company had until the end of 1911 to reach Clarinda, which it did so quite hastily on December 30th of that year. "Built in 1911, it would last only five years. Still hoping for an outlet on the Wabash, the people of Clarinda, aided by subscriptions from College Springs, financed the Iowa & Southwestern. The 17-mile line, opened in 1912, soon went bankrupt. Operation ceased in 1916, and the road was subsequently abandoned. (Donovan, 1964)" While this line had an even shorter life than the Clarinda & St. Louis, it was probably a little more useful, as it brought the nearby village of College Springs, IA rail service for the first and only time in its history, in spite of the fact that the Burlington controlled line that ran southwest from Clarinda was known as the Clarinda, College Springs & Southwestern. By 1918, however, all traces of this line ceased to exist, as the rails were removed, most likely to aid in the war effort for World War I, as was a common fate for abandoned lines at that time.
It would also be the last railroad construction in Clarinda, along with one of the first to be abandoned.
The Humeston & Shenandoah Railway
By far the longest railroad line to pass through Clarinda was the Humeston & Shenandoah Railway. The H&S connected Van Wert, IA with Shenandoah beginning in 1881. Contrary to its name, it never reached Humeston, which was east of Van Wert.
The road was originally promoted by Jay Gould's Wabash Railroad as a way to reach Omaha, NE, but was contested by the Chicago Burlington & Quincy Railroad, similar to the other railway lines we've discussed already. But instead of a railroad war, the two companies chose to operate the right of way as a joint railway, forming a company to lease the railroad, with half ownership by the Burlington and Wabash. This arrangement continued until 1899, when the Wabash entered bankruptcy, leaving the Burlington to assume full ownership of the route.
Unfortunately, in building the line, "a great cut had to be dug through the hills near Clarinda. While the men were working a smallpox epidemic broke out, and people in the neighborhood became so frightened that Clarinda officials obtained the services of a young Doctor Enfield from Rush Medical School, Chicago. The doctor and Sheriff Tom Brooks kept the victims of the disease isolated in the railroad camp a mile from town, and there were no cases in Clarinda. The two men not only had to care for the sick but also to bury the dead. Most of the laborers who died were Irish Roman Catholics. As there was no cemetery near the camp and no Catholic graveyard in town, Doctor Enfield and Sheriff Brooks placed the bodies at the east end of the big cut and covered them with earth taken from the digging. For years afterward the burial plot could be seen from the windows of passing trains." (O'Dell)
The CB&Q combined it with the Keokuk and Western Railroad, forming a Keokuk-Shenandoah line. Although not particularly profitable, the line survived in full until 1938, when the Norwich-Clarinda section was abandoned.
Further piecemeal abandonment continued until 1983, when CB&Q's successor, Burlington Northern, abandoned the last stretch of road between Merle Junction and Clearfield.
Clarinda, College Springs & Southwestern Railway
Nearly thirty years before the ill-fated Iowa Southwestern Railroad gave College Springs rail service, the CCS&SW was supposed to bring the town rail service via the Chicago Burlington & Quincy, but all it did was bring the town a bit of humiliation, as the corporate name of a railroad implied it ran through there. "Citizens felt elated when the Clarinda, College Springs & South Western Railroad was projected through College Springs, but the Burlington, on a branch-line building blitz in Iowa, decided that this road, which it controlled, would extend from Clarinda through Page Center and Coin to a connection with its Tarkio Valley branch at Northboro.
This route missed by a dozen miles the town honored in its corporate name. A nearby Missouri newspaper suggested tongue-in-cheek that the loss gave its residents an option: "The only thing that remains for them is to let some responsible party have the contract of moving their town to Blanchard," a growing community recently established on Wabash rails about six miles away." (Hard-Luck Town: College Springs, IA)
I think College Springs' real mistake was not insisting the railway be named the Clarinda Braddyville & Southwestern in the hopes that this would've enticed the Burlington to build it through College Springs instead.
But this is about Clarinda, and in 1882, the CCS&SW opened for service as a subsidiary of the Burlington, connecting Clarinda southwesterly toward Northboro, IA. From there, another CB&Q subsidiary, the Tarkio Valley Railroad, connected the line to Corning, MO for a roughly 46 mile line between the two endpoints.
While no lines service the town anymore, there is at least one remaining artifact of Clarinda's railroad past still standing: there is an abandoned Burlington freight depot at Garfield and 9th St.
If you enjoyed today's blog, let me know in the comments, and feel free to share this with anyone you may think could learn something or entertained by it.
Thanks as always for reading!