Project Carryall: Save 15 Miles or More Off Your Railroad Mileage By Switching to Nuclear! If you think the words "nuclear" and "railroad" shouldn't exist in the same sentence, you're probably not the Atchison Topeka & Santa Fe Railway in the early 1960's.

When we think of nuclear bombs, we typically associate them as weapons, since the vast majority are used in military circles, but with the nuclear age came the potential to use these weapons not as deterrence or the annihilation of humanity, but rather construction projects.

Just one year removed from the Cuban Missile Crisis, in 1963 the AT&SF wanted to harbor this technology to re-align their railroad near Ludlow, CA, as well as Route 66 and the brand new Interstate 40, and save about 15 miles off of the mainline right-of-way.

The idea was to straighten the Santa Fe mainline between Needles and Barstow, as well as reducing the grade through the mountains. Given that all the areas in between the two cities were practically ghost towns, it made sense to try to abandon the route and re-align the tracks and road to a more tangent alignment.

I've made a quick map below for clarity. The nuclear alignment should not be considered definitive, since to my knowledge a full survey of what the grade would have looked like was never completed, or at least not made public.

The actual grade proposed would have changed lines at Goffs in the East and Ash Hill in the West. This would have saved about 50 minutes in transport time for a typical freight train along the route. The State of California would also use the newly-blasted route for an alignment of I-40, saving about 10 miles off of the existing alignment. 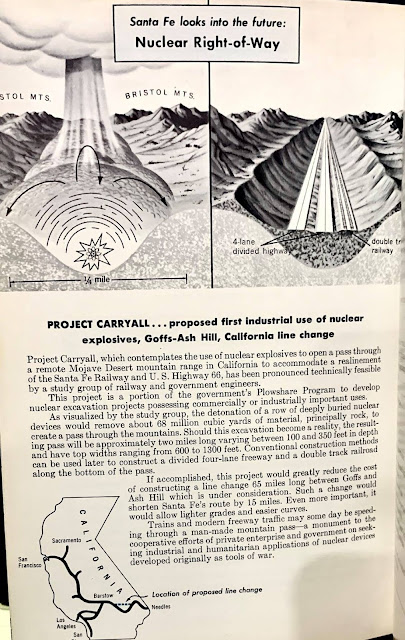 Project Carryall - the name of this proposal, was an offshoot of the larger Project Plowshare, which studied the use of nuclear weapons for peaceful purposes, namely massive construction projects.
The AT&SF contacted the Atomic Energy Commission to study the feasibility of using nuclear bombs in place of conventional blasting to literally move mountains - as the cost of nuclear bombs was only somewhat more cost effective in comparison to the amount of conventional bombing that would have been required to excavate and tunnel the area, and would take a comparatively small amount of time. You can read the feasibility study of the project here.
While the project was never completed, tests using small scale nuclear bombs the subject matter bears a historical marker in Ludlow, CA.
The marker reads, "With the end of World War II and the onset of the Cold War, America embarked on an ambitious program to ensure the nation's preeminence in the nuclear arms race. To this end Edward Teller and the Atomic Energy Commission detonated hundreds of nuclear devices underwater, underground, and in the atmosphere. Weapons development remained paramount, but the AEC also held a mandate to develop peaceful uses for atomic power. In 1957 California's Lawrence Livermore Laboratory launched an experimental program called Operation Plowshare to use nuclear energy for such applications as power plants, medicine, mining, the extraction of oil and natural gas, and for the excavation of canals, harbors and roadways. Under Plowshare, a 1963 feasibility study was conducted for Project Carryall, a plan to realign the Atchison, Topeka and Santa Fe Railroad and provide a route for Interstate 40. 23 nuclear explosions totaling 1.8 Megatons were to be used to excavate 1 2-mile cut up to 350 feet deep through the Bristol Mountains east of Ludlow and remove 60 million cubic yards of rock. Despite many assurances of safety from the AEC, obvious environmental and health concerns over this and other Plowshare projects caused several postponements, and in 1968 the project was dropped completely. 28 nuclear tests were conducted under operation Plowshare before its termination in 1975."
As Carryall was just one of many atomic projects under the Plowshare umbrella, the Santa Fe decided to wait on the results from some of the other projects before going forward with Carryall. The results they found failed to live up to economic expectations, as the costs and potential fallout impacts did not appear to meet the potential positives of using nuclear technology for construction. In 1966, California pulled out of the project entirely, meaning I-40 would be built using conventional methods. The Santa Fe ultimately pulled the plug on the project soon after, and the grade through Ludlow remains in place to this day.
It turned out that the general public wasn't particularly fond of nuclear weapons being detonated in their own back yards with Project Plowshare, and while we try not to endorse NIMBYism here, I can't really blame anyone for that, although there were relatively few impacts with what nuclear weapons were detonated in tests for the project. But by 1977, Project Plowshare and all its associated projects were cancelled.

If you'd like to read more about Project Plowshare, there's a book by Scott Kaufman, "Project Plowshare: The Peaceful Use of Nuclear Explosives in Cold War America" (Link is for Amazon and may earn the site a commission if you use it)
Thanks as always for reading!
abandoned highways history maps rights-of-way Route 66 US Highways
Location: Ludlow, CA 92338, USA