Poor's Manual of Railroads of the United States

Poor began publishing a manual on railroads in 1868, which was geared toward investors at the time, and included information railroad companies and their capital, rolling stock, expenditures, and other financial information on any particular railroad in the United States. The Poor Manuals remained in annual publication until 1924.

I discovered the Poor Manuals in my search for abandoned railroads, as they include a treasure trove of information on even the most obscure railroads. Many of the editions are digitized and available in eBook format for free on Google Books. Reprinted editions, as well as very old reference copies, such as mine from 1909, are available on both eBay and Amazon.

Most of the editions include over 2,000 pages of information, and not just of financial documents, but sometimes maps and descriptions of the routes as well, which is invaluable for the preservation of railroad history. In spite of the amazing and hard work by railroad museums, historic preservation groups, railroad historical societies, and just plain railfans, nonetheless, there's work to be done to preserve the history of the railroad industry on the internet. Indeed, books and non-digital photographs are a large part of our historical record, even if they are harder to access.

So with that in mind, let's take a look at this behemoth of a railroad book! 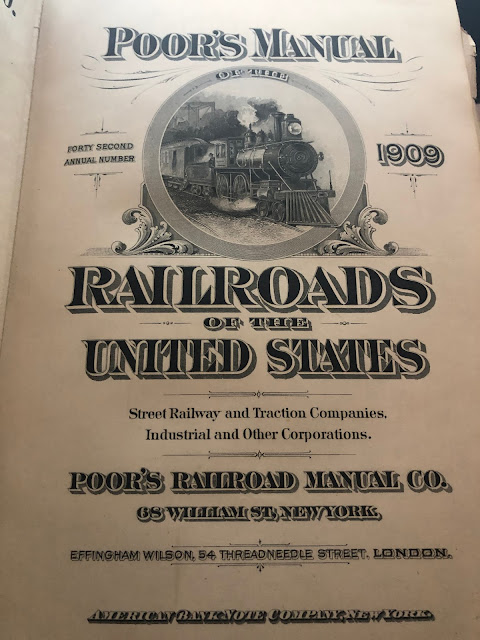 The first few pages are your typical acknowledgements and introductions, followed a few ads for banks and railroad companies, and then comes an index of all the railroads covered in the book, which is extremely helpful, as again, this is a huge reference, and looking for info on one railroad would take forever otherwise. The index itself is over 100 pages long!


Following the index begins the real meat of the book. In the 1909 manual, the Bangor & Aroostook Railroad is the first railroad mentioned. It references the miles owned by the company, any lines in which it leases, a corporate history, a map of operations, a description of the rolling stock owned by the road, its miles of operation in the previous year, funding, financing, profit or loss, accrued interest on bonds, debt, capital stock, and finally directors.

Needless to say, there is a fantastic amount of information that can be gleamed from this book. My copy has several pull out maps, including one of the entire Pennsylvania Railroad system, which was nearing its peak in 1909.

One of the most interesting things about the book is that, as a corporate reference, it makes reference to many railroad proposals and startup companies, many of which never got off the ground. One particular example is the Alva, Buffalo & Colorado Railroad, who's charter was revoked in 1915 without ever building a connection between Buffalo and Rosston, OK, as was proposed. It's thus probably the best resource for unbuilt railroads, which usually do not attract much interest from railroad historians or fans.

This list is also great for finding the predecessor railroads of larger companies, as railroads have continuously consolidated themselves over time.

While the book is obviously a tough read and has very dry subject matter, it's not a novel, and it's not to be judged as such. It may not be everyone's cup of tea, but it has information that you're going to get in almost no other place. I'm still poring through the obsolete companies list to find more obscure railroads to add to my map!

As always, thanks for reading!