A Visit to the New Buffalo Railroad Museum

By FRRandP October 20, 2019
Today the Mrs. and I visited the New Buffalo Railroad Museum, a replica Pere Marquette Depot in New Buffalo, MI. The Depot is located near where the original PM station was for New Buffalo.

This was one of the smaller railroad museums I've visited, although I highly enjoyed the little time I did spend there. There may not be any heritage operations running out of here, but they did pack a lot of history into a small space, and the potential for further renovation is quite easily visible.

Adjacent to the museum is the former roundhouse used by the Pere Marquette, which was in service until 1984. The roundhouse, and its relocated turntable served none other than Pere Marquette 1225, made famous in the book and film adaptation of The Polar Express.

Today, the museum has the station depot and three pieces of rolling stock, two of which are available for the public to enter. The caboose unfortunately had graffiti all over it.


On the walls of the boxcar was a map of New Buffalo from 1857. It's information like this that make museums and libraries so important, because despite believing that I'd discovered all the abandoned rights-of-way near the New Buffalo area, there were actually several I was missing, including two bridge wharfs out into Lake Michigan, which were owned by the Michigan Central Railroad.

I've made a map of New Buffalo abandonments and points-of-interest that I'm aware of. Unless there's a historical reason to do so, I don't add rights of way under a mile in length to my worldwide. abandoned railroad rights-of-way map, so a second map is necessary.

Anytime I can say I've learned something, I can always say its worth my time. That said, even if I hadn't found the map, I've saved the most entertaining part of the museum for last, a very large model railroad, which occupies most of the upstairs of the railroad depot. 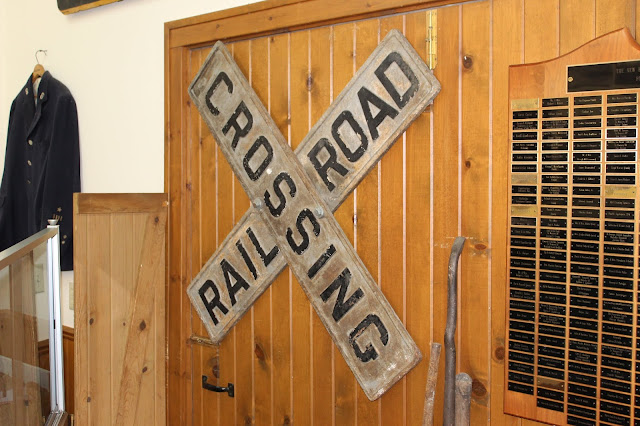 It takes about an hour to see everything here, so it's not a full-day trip, however if you find yourself in New Buffalo, I definitely recommend checking it out despite its small size. The New Buffalo Railroad Museum is located at 30 S. Whittaker St., New Buffalo, Michigan, and open weekends between April and the end of October. Admission is free, but donations are welcome.