The first railroad abandonment in the State of Colorado was the Arkansas Valley Railway, built in 1872 and abandoned just five years later. (Right of way)

The AVRy was a Kansas Pacific subsidiary, and an attempt by the company to reach Pueblo, CO, after building their mainline through Colorado enroute to Denver. The line ran south from Kit Carson, CO where it met the mainline, and reached 74 miles south to La Junta. 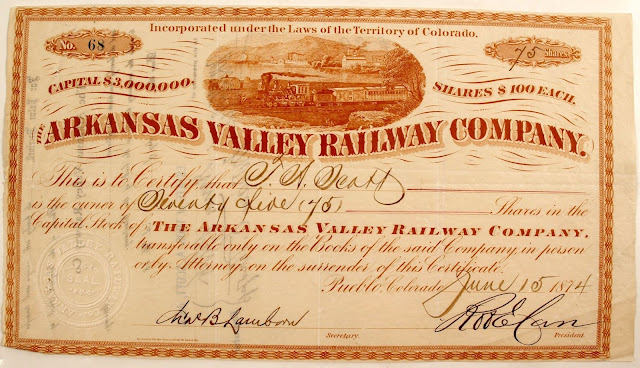 The Kansas Pacific and Atchison Topeka & Santa Fe each sent bond proposals to the citizens of Pueblo in an attempt to secure funding to build a railroad line. The AT&SF bond issue won out, leaving the AVRy to serve only the Kit Carson-La Junta route.

In 1876, the ATSF finally reached Pueblo, and took nearly all freight and passenger traffic with it, thus rendering the AVRy obsolete. Just one year later, the decision to abandon the Arkansas Valley Railway would make it the first abandonment in the State.