Guest blogger Alain Bernier returns to discuss some of Quebec's abandoned railways. If you'd be interested in doing a guest blog yourself, feel free to reach out, we always appreciate those willing to help add relevant content to our site! With that said, here's Bernier's post about the short line L’Epiphanie & L’Assomption Railway.

The L’Epiphanie & L’Assomption Railway (also known as the L’Assomption Railway Company) was a very short 3.33-mile (i) line connecting the villages of L’Assomption and L’Épiphanie, both located  some 30 miles from Montréal in the Lanaudière region of the province of Quebec, Canada. It was as short lived as it was short and its history is closely linked to the Quebec, Montreal, Ottawa and  Occidental Railway (QMO&OR).

In 1874, the Government of Quebec formed the QMO&OR to link Quebec City, Montreal and Ottawa via the north shore of the St. Lawrence River. This placed the QMO&OR in direct competition with the Grand Trunk Railway that was already connecting these cities via the south shore of the river. At the time, L’Assomption was a thriving village, the seat of a court of justice and of land registry office, the location of a college and a convent, as well as a commercial and service hub for farmers and travelers.

For L’Assomption’s local elite, it went without saying that the new railway would serve the village.  After all, it was the county seat. However, the construction of the QMO&OR was the object of battles of influence and power between the largely francophone political elite in the provincial capital, Quebec City, and the essentially anglophone financial elite in the country’s economic capital of the time, Montreal.

A railroad on the north shore of the St. Lawrence River could bypass Montreal and reinforce Quebec City’s integration into a new transcontinental railway unit. Unfortunately, what Quebec City might have had in political will, it lacked in financial means. The funds were in the hands of the Montreal financial elite. The financial burden was such that it placed the provincial government in a weak position against the Montreal banking tycoons and the federal government in Ottawa. The following statement from the Provincial Treasurer of Quebec, in 1875, gives a sense of that burden:

“I would rather meet a patent-rights man, or a book-peddler, or a lightning-rod professor, or any other sort of man, than a man who has railway on the brain, and who comes to me for a subsidy.” (ii)

At the end of the day, the alignment of the QMO&OR would be a compromise. By choosing an  alignment to the city of Terrebonne, rather than a route that would serve Montreal directly through the Bout-de-l’Île, Montreal would still be connected to Quebec City and Ottawa, but the position of the railway to the north of and outside of Montreal Island, left open an alternative  route from to Hull and Ottawa. The direct route would have placed L’Assomption on the  QMO&OR, and the alignment via the Bout-de-l’Île would be the route later chosen by the Great Northern Railway to connect Montreal to Joliette. The compromise instead placed L’Épiphanie  on the QMO&OR.

Upon confirmation of the QMO&OR’s Terrebonne alignment by the government of Quebec in March 1877, Louis Archambault, Member of Parliament for L’Assomption was rightfully upset that  the county seat would be bypassed (iii). Yet, neither his accusations nor the complaints of other Members of Parliament or Members of the Legislative Assembly of Quebec would inflect the might of Montreal.

Once the QMO&OR opened for business between Trois-Rivières and Montreal in February 1879, a solution was needed to allow the village of L’Assomption to benefit from the  progress that a railway was bound to deliver. That solution came from Louis-Adélard Senécaliv, a rich businessman, member of the Legislature of the province of Quebec, who was made superintendent of the QMO&OR in March 1880. (v) On September 16, 1886, the Federal Department of Railways and Canals entered in a contractual agreement with the L’Assomption Railway Company to build a railway between L’Assomption and L’Épiphanie along with a subsidy of $3,200 per mile for a total of no more than $11,200. (vi) In its annual report for the fiscal year 1886-1887, the Department reports that the line was inspected in January 1887, found to be completed, and the balance of the subsidy was paid to the total amount of $11,200. (vii) 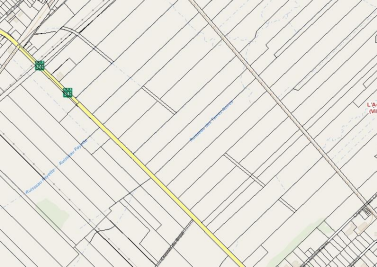 The town of L’Assomption is nearly encircled by a meander of the L’Assomption River. That left only one option to route the railway to L’Épiphanie and avoid having to build bridges.

Leaving the village, the railway went in a southwest direction before turning to a northwest direction, after having cleared the river, and from there straight to L’Épiphanie Station where it connected with  the former QMO&OR (sold to the Canadian Pacific Railway (CPR) in 1885 (viii).

Indeed, the railway operated with a single steam engine and a single passenger carriage. (xi) By July 1897, the company was running services from L’Assomption to meet all day-trains of the CPR at L’Epiphanie Station (xii).

In the 17 years of operation of the railway, the passenger station in L’Assomption was moved three  times, each time moving further away from the center of the village (xiii). The railway was certainly useful but its operations did not appear to be very profitable. For the fiscal year 1889-1890, the railway had carried 6,674 passengers and 773 tons of freight. The gross earnings were $1,682.22, ending the year with a deficit of $427.58 and a floating debt of $2,499.93 (xiv).

What was not achieved by the QMO&OR was finally achieved in 1903 by the Great Northern  Railway (GNR), competing directly with the CPR. In 1899, the city of Joliette had granted a bonus to the GNR to support the construction of a railway from Ottawa to Montreal and Quebec City via Joliette (xvi). This time, L’Assomption was on the route chosen for this new railway that would leave the Montreal Island at Bout-de-l’Île, pass by L’Assomption and cross the path of the QMO&OR a short distance to the northeast of L’Épiphanie. “Le P’tit Tardif” was no longer required.

ii Provincial Treasurer of Quebec in 1875, quoted in Brian J. Young, Promoters and Politicians: The North Shore Railways in the History of Quebec 1854-85, Toronto, University of Toronto Press, 2017

v Senécal, Louis-Adélard, in Dictionnaire biographique du Canada, Vol. 11, Université Laval/University of  Toronto, 1982 (http://www.biographi.ca/fr/bio/senecal_louis_adelard_11F.html) vi Dominion of Canada, Annual Report of the Minister of Railways and Canals for the Past Fiscal Year from  1st July, 1886, to 30th June, 1887, for the Works Under His Controls, Ottawa, Maclean, Roger & Co., 1888,  page 160

Thanks to Alain Bernier for his contribution, and thanks as always for reading!
abandoned Canada history maps pictures railway
Location: L'Assomption, QC, Canada