The Oklahoma and Arkansas Railway was a short line railway roughly twenty miles in length, running from Salina, OK eastward to a point referred to as Day, OK. Despite its name, it operated exclusively in the state of Oklahoma in both Mayes and Delaware County.

Construction began in 1921, with the line wholly owned by the National Hardwood Company in pursuit of timber interests.

Neither Salina Junction (or Kenwood Junction), nor Day, Oklahoma exist on maps anymore, and for us to find the line, it took numerous resources to find the track of the railway.

The line is among the more obscure lines, and it only ran between 1921-1926 between the aforementioned points. Having such a short life meant that the remaining track of the line was invisible on satellite imagery, which can also be attributed to the terrain of the area.

It also meant that it managed to avoid being on USGS Topo Maps, since it was too late to be included on the 1904 Siloam Springs Quad, and had been long abandoned by the time the 1954 Tulsa Quad was published.

In fact, it's one of the few railroads to which I cannot seem to find any photos of the line in operation, similar to the line in my own backyard, which is a bit of a sore spot for me.

Thus, a report in Railroads of Oklahoma (1870-1978) by the Oklahoma Department of Transportation was instrumental in finding the first clue of its existence, as looking on Google Maps or OpenRailwayMap would prove futile, as no visible trace of the right of way remained.

OpenRailwayMaps' rules state to map only visible abandonments, which means that this line is not on their map, as of November 2021, despite our trace of the line being visible in September of 2020. It's a shame that a project dedicated to mapping railway infrastructure across the world takes such a cavalier approach to mapping history. But I digress.

The same report listed its beginning on the Kansas Oklahoma & Gulf Railroad at Milepost 82.8. This pdf of stations on the line noted that this would make it just 2.6 miles north of Salina, OK. From there, a trace could finally be established. 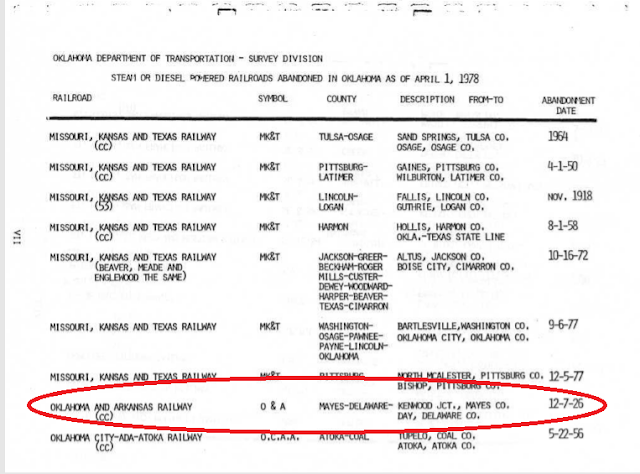 Even so, it was only traceable via LiDAR data, which uses light detection from satellites with technology similar to radar. These data are thankfully available for public consumption for Delaware County, OK.

Using the LiDAR hillshade map, you can clearly see the trace of the line below:

This isn't the only time that LiDAR has come in handy for finding abandoned railroad infrastructure, as we also discovered an old railroad bridge in Indiana using the same technology.

So while I may not be able to share with you any photos of the operation, I can definitively map it for you, at the very least!

Special thanks to Oklahoma Digital Prairie for cataloging the OKDOT report that led to this line's discovery, and thanks as always for reading!