As we discussed yesterday regarding the Milwaukee Road "Frying Pan" Line in Beaver Dam, WI, while built in 1882, the line actually had its genesis as a part of an mostly-unbuilt ancestor to the Milwaukee Road, that being the Beaver Dam & Baraboo Railroad.

Much like the Frying Pan Line, Joe S informed me of this line as well. Given the age of the BD&B Railroad, and the fact that it was unbuilt, like thousands of railroad companies, there might not have been much to discuss about the line, however, it is interesting given that a decent amount of the right of way was graded between Beaver Dam and Fall River, WI, and we have satellite imagery showing those grades. Additionally, as the Frying Pan used part of the former right of way in Beaver Dam, at least a small part of this route was actually built as intended.

Here's a bit larger view of this satellite image from the WHAIF: 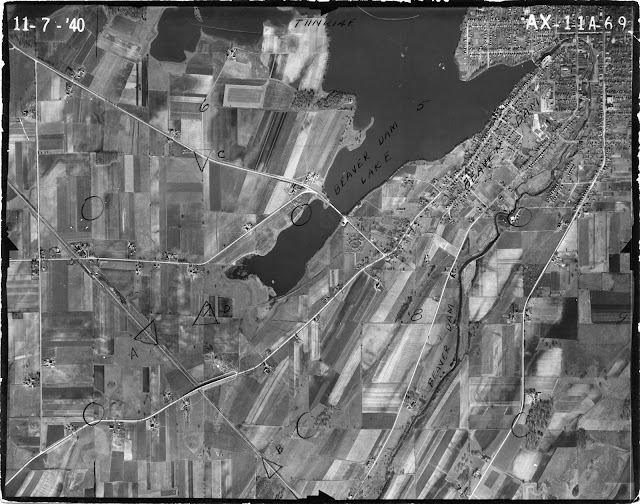 The location of "Beaver Dam & Baraboo Railroad implies the road was to connect to the mainline Milwuakee Road close to where the Beaver Dam Jct. would in 1882, and then head in a southwesterly direction to downtown Beaver Dam, perhaps along the Frying Pan ROW, or closer to Beaver Dam Lake. Joe S states, "there never were tracks on the street, only near it, or maybe the owners or bankers of the railroad used to live on that street, however I never heard anything of it, but it is possible that the railway could have ran down that street and then curved either north or south to go either direction." and that the actual location of the beginning of the BD&B was supposed to be on Mill Street. So far none of my research can confirm or deny either of these theories, as all we have are the satellite images where grading took place, and where the Frying Pan line was actually built. Joe went on further to state, "I have been told by people at train shows, online discussions and railroad historical societies, that it was to run in a straight line along the water beyond the [St. Michael's] cemetery.
An 1872 atlas states that "Beaver Dam & Baraboo St" became Lake St, west of present-day Gilmore Av., further implying that this was supposed to have been a right of way for the line in some capacity, at least pre-1872.
Here's a map of both the alignment Joe S has shown me and the possible connection to Lake St and Gilmore Av:
It appears as though the fate of the BD&B Railroad is largely tied to the Panic of 1857. In A Standard History of Sauk County Wisconsin, it is noted that "...the Baraboo Valley route should be surveyed in the following spring and work commenced on the grading as soon as possible; but the panic of 1857 nullified all such promises and put a temporary quietus on the railroad plans and hopes of the citizens of the Baraboo Valley. For lack of adequate means, the enterprise known as the Milwaukee & Western and, later, as the Milwaukee, Watertown, Beaver Dam & Baraboo Valley Railroad, fell by the wayside, and the weeds of neglect sprung up and choked it. Judge S. L. Rose was at the head of that project, made a tour through the Baraboo Valley, and secured pledges of $100,000 from the different towns along the route." So while the grading is likely pre-1857, the company and hope for a railroad continued after the 1857 panic until at least 1863, when the idea of a railroad south of Beaver Dam was ended in perpetuity, as the successor railroad, the Milwaukee & Western, would largely bypass Beaver Dam, or at least the downtown area.
Thanks as always for reading!
abandoned history maps Milwaukee Road unbuilt Wisconsin
Location: Beaver Dam, WI 53916, USA