By FRRandP May 25, 2018
As the County immediately north of Cook County and the City of Chicago, as well as south of Milwaukee, and with Lake Michigan to its east, Lake County has a ton of railroad history, as many lines passed within its borders. To this day, the railroad industry remains an integral part of the county's transportation infrastructure, as four passenger lines run within the county, en route to Chicago.


Today's blog will be a focus on the history of Lake County's railroads. Thanks to Metra for providing some of these histories on their website.

In 1872, the Milwaukee Road (at this time named the Milwaukee & St. Paul Railroad) came to Chicago from Milwaukee, and then changed their name to the Chicago Milwaukee & St. Paul. Today's Milwaukee District North Line runs along the same trackage, but is owned by the Canadian Pacific as the Milwaukee went bankrupt in 1989. In 1880, Milwaukee Road would expand its operations, creating its own route to Janesville diverging from the mainline at Rondout. Nowadays, that line runs primarily passenger traffic, although did run two freight trains a night from the Wisconsin Southern Railroad (as I soon learned living near it).

1886 would add yet another line running through Lake County, as the Wisconsin Central would build a competing line through central Lake County between Chicago & Milwaukee. It was later merged into the Soo Line, and merged once more into Canadian Pacific. Reorganization occurred in 1987, creating the Wisconsin Central Limited, which is now a subsidiary of Canadian National. In 1996, passenger service was restored along this line as Metra's North Central Service.


Canadian National would steadily increase its presence in Lake County through its purchase of the Elgin, Joliet & Eastern Railway in 2008. The Lake County portion of this line would get its start in 1891 as the Waukegan & Southwestern Railway. It was acquired by the EJ&E shortly thereafter, with passenger service ending in 1909. It nonetheless remains a very busy freight line in Lake County west of Leithton junction. East of Leithton, the line only serves a few customers a week in Waukegan.

While most of the large railroad lines still in service today would be built in the 19th century, in 1904, the Chicago & Northwestern would split their mainline between passenger trains and freight traffic, which still is the case today.


The Early 20th Century saw an abundance of interurban and electric railroads in Lake County, some successful, some not. One of the least successful lines was the Waukegan Fox Lake & Western Railway, which ran along Washington St in Waukegan. Owned by the predecessor to the Chicago Milwaukee & North Shore Line (A much more successful interurban), tracks were laid through Waukegan on Washington St, with plans to be extended into Fox Lake. It would be muddled by a lack of funds and public opposition, and would ultimately be abandoned in 1916, leaving no traces, no photograph and very few maps of this line.

Thankfully, due to the efforts of many individuals and organizations, such as the Illinois Railway Museum, and the book Days of the North Shore Line, the history of this route is quite well preserved.


Lake County, like most places has a significant amount of abandoned lines, like the aforementioned North Shore Line. All of the lines which I've found have been listed on the map above.


Sadly, I have no information on this line, other than it no longer showed on topo maps after 1928.

Palatine Lake Zurich & Wauconda Railroad -
The Palatine Lake Zurich & Wauconda Railroad was originally envisioned as an interurban line, which would have extended all the way up to Fox Lake, and connected with the Fox Lake and Western (itself never reaching Fox Lake, or out of Waukegan for that matter). Instead, it was built as a steam line to Wauconda, opening up southern Lake County to the railroad network and a connection to the Chicago & Northwestern Railway in Palatine.


Sadly, the line could not compete with the automobile, especially as local roads in the area improved. The line, built in 1912, only ran until 1924 before being abandoned. There are scant few traces of the line today, most of which parallels Old Rand Rd and the current US 12.

This spur was used to transport sand, gravel, and beach-goers to and from Illinois Beach, but was abandoned very early in the 20th Century. Nonetheless, the tracks have appeared from time to time at very low tides, but are generally buried under dirt, rocks, and sand. These tracks were the subject of my second blog.

Another spur existed closer to the Wisconsin State Line in Winthrop Harbor, but to my knowledge, all traces and trackage from that line are gone. 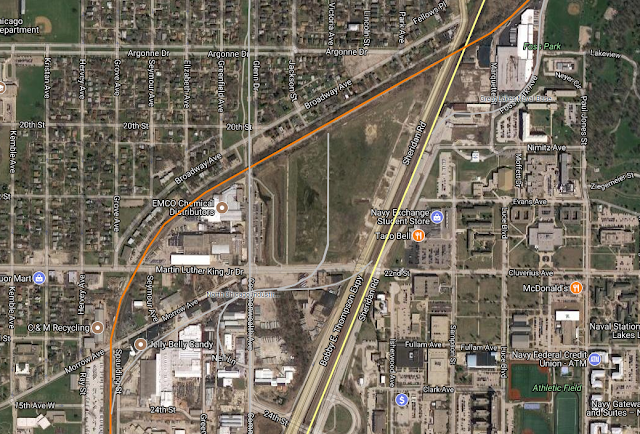 In North Chicago and Great Lakes Naval Base, there exists plenty of abandoned spurs from the Union Pacific and Canadian National (former EJE) lines in the area. In most cases, the tracks are still there, but disconnected from the railroad network and disused.

A small spur off the Milwaukee District North line existed originally to serve a lumber yard out to 1st St, and had another track which extended south to near IL 176.

Although the line disappeared from maps in the 1980's, the track still exists behind what is currently an abandoned warehouse.

While my focus in this blog post is on abandoned railroad lines and companies, no history of Lake County's Railroads would be complete without mentioning Rondout. The unincorporated town of Rondout was once a stop on the Milwaukee North Line up until the 1980's, and is the spot where the line diverges from the main line enroute to Janesville, WI, as well as crosses the former Elgin Joliet & Eastern.
If that weren't enough, at this junction was once a crossing with the North Shore Line's Libertyville Division as well, which goes over both tracks today as the North Shore Bike Path.

But what makes Rondout really interesting is that it was the site of the largest train robbery in US History.

Four robbers would walk away with over $2 Million, all but $100,000 of which would eventually be recovered. Today, next to the railroad and north of IL 176 exists the plaque which tells the story of the robbery.

I hope you enjoyed this blog, and I hope further that I didn't leave anything out about the railroad history of the county. As always, if you have anything to add, please do so in the comments! Special thanks to the Dunn Museum of Lake County for some information here, as well as a thank you to you for reading!
abandoned EJ&E Forgotten Railroads of Chicago Lake County maps Milwaukee Road pictures rail-trails rights-of-way scarchitecture