By FRRandP May 31, 2018
During the 19th Century, the railroad industry spread all across the world from its beginnings in the United Kingdom. The United States, Canada and Mexico all owe the industry greatly for developing their interior. Indeed, the American West would look a lot different today were it not for the railroad industry.

While large, intercontinental railroad lines make perfect sense, and are the backdrop for American lore, railroad have also been built all across the world, including many remote and obscure places. Here are some examples of railroads that have been built in extremely remote destinations.
You can type in the GPS Coordinates into our Abandoned & Out-of-Service Railroad Lines Map and see these lines in greater detail for yourself! 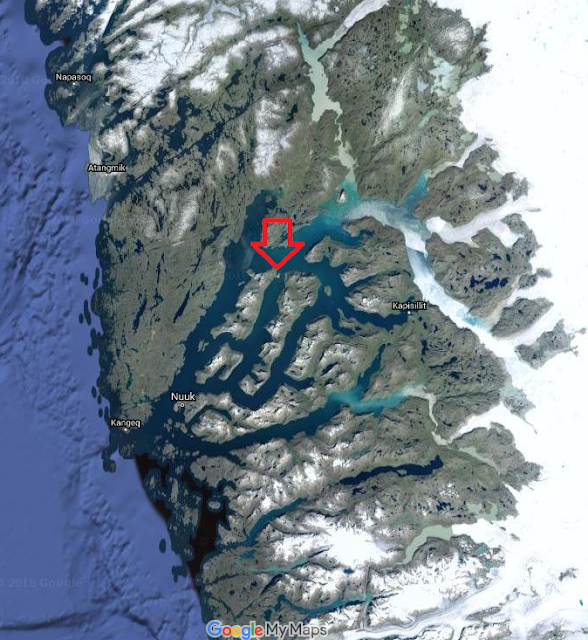 With a population of about 56,000 people spread across a mostly frozen tundra, one wouldn't expect Greenland to have much, if any, railroads. That, for the most part is true, however, there have been a few railroads built for the specific purpose of transporting goods to and from boats. Such is the case of the Qoornoq Express, named for the Village of Qoornoq, which, along with the railroad, appears to have been abandoned in the 1970's.

It is a near certainty that this line wasn't powered by steam or diesel, and was simply designed to make transporting cargo easier on the villagers. The design thus features some interesting and unique elements, such as this turntable.

From malmborg.info, "Nordens Järnvägar 1976" the "Kongelige Grønlandske Handel" built a facility for the drying of fish at Qoornoq in the Godthaab fjord in 1955. A 600 mm gauge railway was used for the transportation between the drying scaffolds and the harbour.The facility was closed in 1971 when Qoornoq was abandoned and the inhabitants moved to Godthaab."


The Apostle Islands archipelago is an island chain within Lake Superior, and the farthest north lands in the State of Wisconsin. The islands are all part of The Apostle Islands National Lakeshore. Sandwiched between Minnesota and Michigan, they are nonetheless a spot where railroad activity once took place. On Devil's Island, the northernmost island, existed a tram road, which originally was "powered by residents, but later had engine power" (National Park Service, p. 141). The rails still exist to this day, and as there are no more residents on the islands, it is likely they will be there for a long time.


Outer Island, the largest of the Apostle Islands, and 15 miles from the mainland, was once home to a logging railroad that has since been lost to time. It is now partially used by a walking path extending from the south end of the Island up to the north.

3) Wake Island, US Minor Outlying Islands (19.29557, 166.60521)
Pan Am Railways began service in 2006 in the northeastern US, after having their naming rights acquired from the defunct Airlines, which were very well known in the 20th Century. Yet Pan Am actually built a railroad line in 1935.
In the 1930's, the United States was quite weary of the potential for an air attack from Japan. Their fears, of course, would come true on December 7th, 1941, sadly. Pan Am Airways was also looking to expand their service area, and as such, partnered with the US Government to expand military facilities on Pacific Islands under the guise of commercial aviation operations.

This led to Pan Am transporting the necessary materials, and a 5-ton locomotive, to power a 1/2 mile railroad line on Wake Island, specifically for transporting military and other cargo onto the Island. This line was likely only used a few times before serving its purpose, but thankfully was preserved in history by an unknown photographer.

Wake Island wasn't the only small Pacific Island in which a railroad called home. In fact, Rota, part of the Northern Mariana Islands, actually had two lines, both of which were for the transportation of phosphate from mines onto ships at the coast. Both of these lines were built by the Japanese between World War I and World War II, and weren't studied by the United States until much later.

Their only mention comes from a report which lists the ruins as having been discovered in the 1980's.

The line would only run for five years, before, like so many other railroad projects, the money ran out, and the complex logistical challenges of transporting construction materials to far Western Alaska got the better of the line. A major storm would be the final nail in the coffin for the railroad, and the rolling stock would be left intact and in place, to the mercy of Mother Nature.

The last train would run in the Fall of 1907, and the storm which destroyed the tracks occurred in 1913, sealing its fate. Since then, it has developed the nickname as "The Last Train to Nowhere", which fits perfectly given its setting, and yet when compared to the other lines on this list, doesn't quite seem right, as Alaska has had, and continues to have, plenty of railroads running through it.

Special Mention: Antarctica
According to sinfin.net, even Antarctica has had railroad lines, much for the same purpose as the one in Greenland, to transport cargo from ships onto land. The site lists three such railroads which have existed on the Antarctic continent, but none that are running today, at least per the knowledge of the website.

There are very few places on the planet to which anyone can say with great certainty that a railroad has never operated. Thus, my list of obscure railroads is not to be considered a complete list, and as such, if you know of any other lines not mentioned, please let me know in the comments.