A Ride on the Coopersville & Marne Railway

By FRRandP May 29, 2019
In our previous blog, I discussed our trip to Western Michigan, and the railroad history I discovered during our visit. I chose to split the trip into two blogs due to its length, and secondly, because the Coopersville & Marne Railway is alive and well, having preserved a section of the old Grand Trunk Western route between its namesake towns.

We visited on Memorial Day before heading home, and in a nice touch, all veterans, uniformed or not, were granted free passage on the train.

The first thing I noticed upon driving up to the Coopersville station wasn't the train itself, but rather, a big, beautiful, but rusting steam engine on the opposite side of the platform, which I learned was once Canadian National 1395.

There were a few other pieces of rolling stock that weren't in operable condition either. 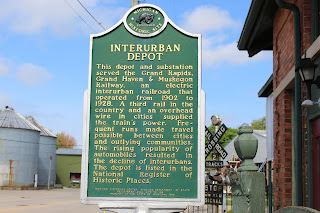 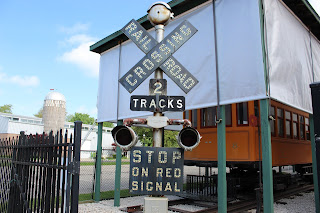 As I had a little time to kill before departure, we walked up the street to the Coopersville Historical Museum, which I talked a little about in the last blog. Located in what was once an interurban depot, they have a GRGH&M car on display, as well as a neat little crossbuck.

I can honestly say I'd love to have something like this in my backyard. I wonder how old it is.


According to their website, the Coopersville & Marne Railway began in 1989. The line was chartered in 1848 as the Oakland and Ottawa Railroad Company. By 1858, operations had begun, but not before the name was changed to the Detroit and Milwaukee Railroad. As many railroads changed hands early in their life, the D&M was no exception, becoming the Detroit, Grand Haven and Milwaukee Railway under the financial control of the Great Western Railway (the Canadian company, not to be confused with its British counterpart). In 1928, it finally became part of Grand Trunk Western, which itself was CN's American subsidiary at the time.

The line was to be abandoned, before being purchased by the Central Michigan Railway, a short-line, in 1987. CMR then sold the line to the C&M, and operations began one year after their purchase, in 1990.

Which brings us to today, or more specifically, Memorial Day. The train consist was C&M 7014, two cars and a caboose. According to the C&M website, "Our train is usually pulled by a 1950's era,125 ton General Motors SW9 switcher locomotive, #7014. This locomotive had been owned by the Grand Trunk Western Railway and served in Battle Creek, Michigan. The 1200 horsepower diesel engine turns a generator, which feeds electricity to the traction motors, which are geared to driving wheels. As much as possible, we stress vintage operation of the equipment, including proper dress for members of the train crew."

We sat in the second car.

The train departed a few minutes late as they waited for a few late showing guests. Once operations got underway, even though it wasn't a particularly warm day, I immediately felt gratitude for living in a time of air conditioning. The old coaches warm up fast! Thankfully, the windows were opened, allowing for a fantastic breeze as we slowly made our way through the countryside.

The conductor explained that the C&M is an all-volunteer heritage line, with the engineer, brakeman and conductor being able to run one train. This train had a brakeman trainee as well, as well as two volunteers dispensing (free!) refreshments aboard the train, which I thought was a fantastic touch.

Once the train pulled into Marne, we could get out and watch 7014 make the turnabout trip to connect to the caboose. Unlike at the Illinois Railway Museum, they uncouple the engine, allowing the engineer to see out front, without the need for control from the caboose. I made a video of the operation taking place:


Throughout the trip, you can see a bit of transportation history on either side of the tracks. Looking south, you'll see I-96 in spots, as the interstate was built to follow the trackage itself.

Look north, and you can see electrical poles, which are the only remnant of the parallel Grand Rapids, Grand Haven & Muskegon Electric Railway left along the route.

Look to the ground, and you can occasionally see water, being the oldest transportation route along this corridor. According to the C&M website, "the track follows an ancient water route first cut into the earth by glacial events." making that the oldest route by thousands of years!

One interesting thing about the C&M is that they also have a freight operation east of Marne, continuing into Grand Rapids. West of Coopersville, however, the line is abandoned into Spring Lake, MI, immediately north of Grand Haven, where it once connected to the Pere Marquette Railway, later becoming part of the Chesapeake & Ohio.

The entire trip took about 90 minutes, after which we headed home for the weekend. I hope one day that the C&M expands their station a little in Coopersville. It would've been nice to pick something up from their non-existent gift shop. A bigger pipe dream would be for them to restore CN 1395 into service, but I understand restoring a locomotive takes more than just throwing money at it.

That being said, the trip was more than enjoyable, the staff was friendly, and everyone seemed to enjoy themselves, except for the screaming babies. I learned a lot and definitely recommend the trip if you happen to find yourself in southwest Michigan.

Thanks to the C&M for the experience, and thanks a lot to you for reading!