US Highway 112 originally connected Detroit, MI with Elkhart, IN, starting in 1926, along with the rest of the original US Highways.

In 1932, it moved farther west, connecting Detroit with Rolling Prairie, IN. In 1936, its final routing was established, running between New Buffalo, MI and Detroit, thus remaining entirely within Michigan. The Indiana portion of the ex-US-112 was briefly known as US-112S.

The route ran south of its parent US-12, but along a similar route, as both roads ended in Detroit. The road had its origins as part of the Sauk Trail between Chicago and Detroit, and would be the primary method of connecting the two major cities, until the Interstate Highway System came into existence.
As part of this, US 12 was upgraded to freeway standards beginning in the 1950's, in anticipation of becoming Interstate 94. 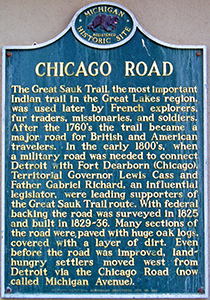 In 1962, the freeway portion of US-12 became I-94, and US 12 was rerouted along the 112 route, eliminating that US Highway, as it existed wholly within the State of Michigan. 112's existence likely spared US-12 a similar fate as many other longer US Highways that were greatly truncated as a result of their freeway routes being replaced by Interstates.