This is an article from Engineering News printed originally in 1915. (Vol 74, no. 13). I believe its interest required it to be preserved in the digital form, so that's what this blog is about. Hope you enjoy!

In order to develop a new rail route from the Northwestern States to the Gulf, the Chicago, Burlington & Quincy R.R. is building a line 13 mi. in length from its present terminal at Metropolis, Ill., to connect with the Nashville, Chattanooga & St. Louis Ry. at Paducah, KY. The principal engineering feature of this line will be the great double-track bridge across the Ohio River, but this will not be completed for some time. [Interestingly, the only bridge over the Ohio near Metropolis is currently only single tracked as of 2020]

To provide immediate communication across the river, the new railway has been extended down the bank on each side of the river, and cars will be ferried across on transfer boats. These are double-track deck scows, accommodating ten freight cars on each track. They will be handled by tow-boats. The distance between landings is about one mile.

At each landing an incline is laid to about low-water line, and on this rides a cradle, which is moved up or down the incline to keep its rails at the same height above the varying level of water. The cradle is shifted as required by a cable attached to a locomotive and passed around a hitching pulley on the cradle frame. The incline has a descending grade of 3 per cent, for a length of about 2000 ft. The track on the cradle is level, with a short 4 percent grade rising from the incline track to the cradle track.

The incline is double-track, with two cradles, one for each track on the boat, but the cradles are separate and are operated independently. The river end of the incline is a double-track timber trestle, with five-pile bents 13 ft. c. to c. under each track and two lines of 8x16-in. stringers under each end of the 10-ft. ties. Fender timbers are laid upon the outer ends of the caps. The tracks are 12 ft. c. to c.

The general configuration of the cradle is shown in Fig. 3. It is 240 ft. long. Its deck consists of two pairs of 8x16-in. stringers upon which are laid the 10-ft. ties. At the land end, where the height is low, the stringers rest directly upon axles arranged in pairs. As the height above the incline increases they are supported by blocking or cross-timbers on two lines of substringers, which are mounted on the axles, as shown. The wheels are mainly 33-in car wheels. As the joints of the stringers are in tension when the cradle is hauled up the incline, they are spliced by horizontal bolts passed through the outstanding flanges of L-shaped straps spiked to the sides of the timbers. These connections also give vertical flexibility to allow for irregularities in track surface. 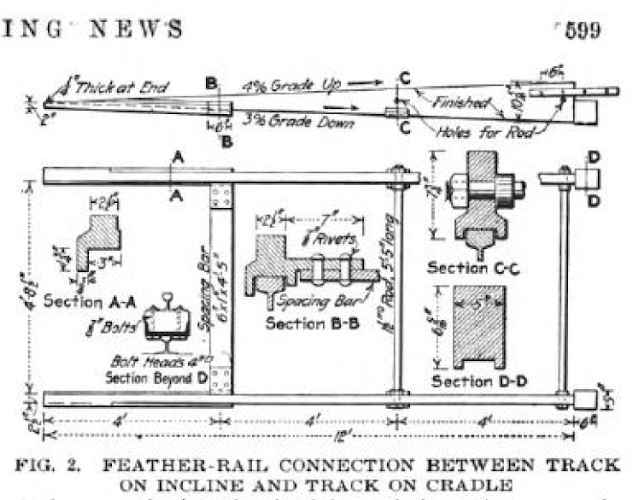 Land and River Connections of Cradle

At the land end of the cradle is a pair of 12-ft. feather rails to connect the track on the incline with that on the cradle. This connection is shown in Fig. 2. The feather rails are steel castings 12 ft. long, grooved on the under side to ride on the incline rail, while the upper surface forms a running head for the wheels. At the toe, where the wheels are engaged, the thickness of the feather rail is only 1/4 in. At the heel there is a splice connection to the track rail on the cradle.

The river end of the upper deck of the cradle is an adjustable apron 30 ft. long, supported by cross-timbers on the substringers. This is shown Fig. 1. It consists of a pair of heavy box-girders, connected by crosspieces and diagonal lateral rods. The I-beam crosspieces are not connected rigidly to the girder webs, but are secured by horizontal pins through angle brackets on the webs. This allows for variations in level of the opposite rails of the incline track, the girders being free to ride and fall independently in a vertical plane, while with rigid riveted connections sever twisting stresses would be set up.

The apron is supported at the heel of and one intermediate point, and its outer end is cantilevered beyond the latter. The outer end is raised and lowered as required to compensate for slight changes in level of the tracks on the cradle and the boat and to bring these rails into exact position. For this purpose its outer support carries a pair of air-brake cylinders with piping led along the cradle and fitted with hose so that it can be connected to the brake system of the engine handling the train. To balance the apron it is fitted with an extension arm consisting of three 10 in I-Beams having a counterweight box from their ends. 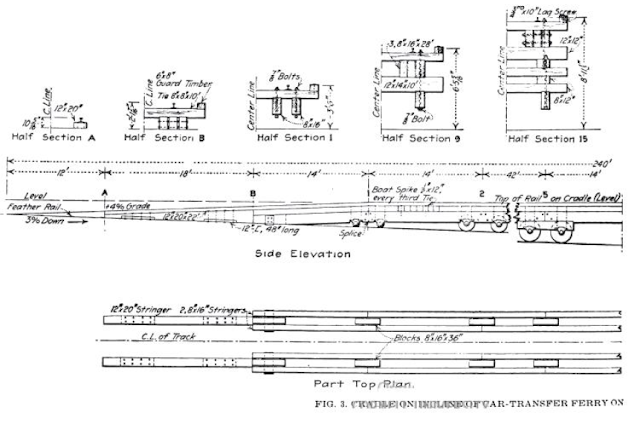 Vertical and lateral movements of the apron are provided for by a hemispherical bearing under the heel of each girder, and a similar bearing or thrust show at its end, butting against the end frame of the cradle. The outer end of the apron is heavily built and braced to withstand blows and has a recessed end frame to receive the V-shaped nose on the end of the boat, thus automatically centering the tracks. Portable rail stops which slide on the rails are used to hold the cradle in position on the incline track, and also to hold the train on the cradle while making the rail-end adjustments of apron to boat.
The new railway is being built under the name of the Paducah & Illinois R.R. The incline on the Illinois side of the river was built and is owned by the Chicago, Burlington & Quincy, and that on the Kentucky side by the Nashville, Chattanooga & St. Louis, of which Hunter McDonald is Chief Engineer. The Chief Engineer of the Paducah & Illinois is C.H. Cartlidge, Bridge Engineer of the Chicago, Burlington & Quincy.

Portable Stop for a Car-Ferry Incline
The Chicago, Burlington & Quincy R.R. is operating a car ferry on the Ohio River for its new line between Metropolis, Ill., and Paducah, KY. At each end of the shore track is connected to the boat by an incline with a cradle that is adjusted to meet varying river level. 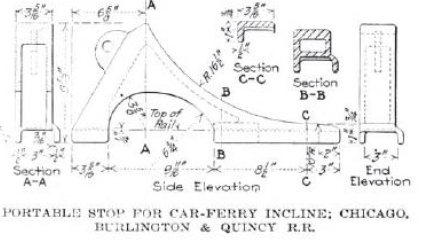 To hold the cradle in position on the incline, and also to hold the train on the cradle while its track is being adjusted to the level of that on the boat, portable rail stops are used. The stop, shown in the accompanying drawing, is of cast steel 23 3/4 in. long and 9 5/8 in. high, weighing about 50 lb. It has a grooved base to hold it in place on the rail, and its bearing surface is corrugated in order to get a good grip on the rail head. The toe is feather-edged to engage the wheel, which rolls up on the stop against a surface having a radius of 16 1/2 in., or about that of the wheel tread.