By FRRandP May 05, 2021
The Heidecke Lake State Fish and Wildlife Area is best known for its fishing lake, which was built in 1978 as a cooling reservoir for the now defunct Collins Generating Station, which closed in the early 2010's. Just south and west of the property exists the nearly abandoned White-Holderman Cemetery. It's located just south of the Illinois River, east of Morris, IL in Grundy County.
We visited the area a few years back on a dual mission; to fish and enjoy the great outdoors and, at least for me, to get up close and personal with some forgotten railroad tracks, which split the lake into two.
I enjoyed the great outdoors and got some pictures of this line, but no fish, not that I ever catch anything.
The tracks are quite rusted in spots, and are a good example of what happens to tracks without proper maintenance and use. There's a certain finality that people believe when tracks are pulled up as to the status of a rail line, that it will never run again.
That isn't necessarily true. Railroad reactivations are uncommon, but they are not unheard of. And regardless, railroad tracks would have to be replaced for the line to be reused anyway.
The railroad line spurred from an area known as Divine, and a rail line owned by the Elgin Joliet & Eastern Railway. In earlier times, that line ran south to South Wilmington, IL; by the time the cooling lake was built, it only served a strip mine about two miles south that is today known as Goose Lake.
The Collins Generating Station was an oil and natural-gas fired power plant, neither of which were transported by rail. So why exactly do these rails exist in the first place? The plant had five units, two of which were built to be converted to fire coal in the future, but this was never acted upon, and thus the tracks only served as storage tracks for Commonwealth Edison railcars, who uses the railroad reporting mark CWEX. I'm not sure if they were privately owned tracks by ComEd, or if EJ&E owned them as well.
Not counting other spur tracks, this line was about five miles in length, from one end of the lake to the other to just north of Pine Bluff Road.
While the tracks are now out-of-service, the area is industrial in nature, so there's still quite a few active tracks. 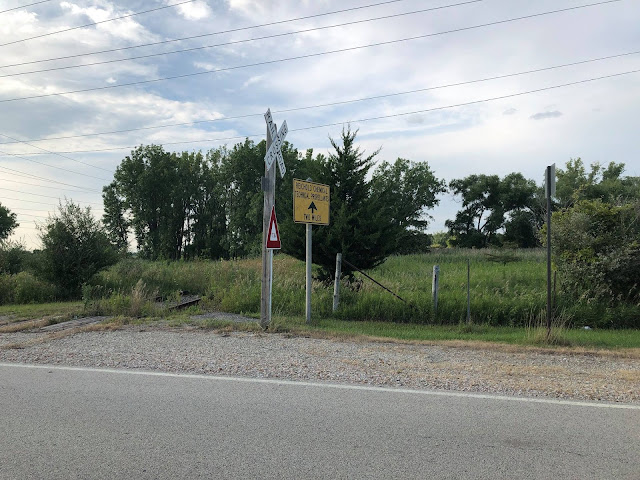 While no industry operates around the lake anymore, the tracks north of Divine appear to still be in service, serving industrial interests such as Reichhold Chemical.

The actual date of the last use of the tracks is uncertain; but it was definitely in the Canadian National days (post-2008). A post suggests that the last train to use the tracks was carrying debris from the demolition of the plant, which makes sense.
As always, feel free to add any important information in the comments on this line. Thanks for reading!
abandoned EJ&E history maps pictures rights-of-way
Location: Heidecke Lake State Fish and Wildlife Area, 5010 N Jugtown Rd, Morris, IL 60450, USA