Railroad Scarchitecture: 15 Hidden Pieces of Transportation History in the 15 Largest US Cities

By FRRandP November 16, 2018
Scarchitecture, is a combination of the word scar and architecture, which refers to the remnants of former roads and railways hidden in today's cities, most easily identified in satellite imagery, thanks to the magic of Google Maps. I've already discussed examples in both Chicago and its suburbs. For today's blog, we're going all across the US in search of other examples of scarchitecture left behind by the days of railroading in major cities.

Keep in mind that there are usually many examples of scarchitecture in cities both large and small, and I'm only going to show one for each city, so go and search for others yourself, and let me know in the comments of any interesting examples you find! 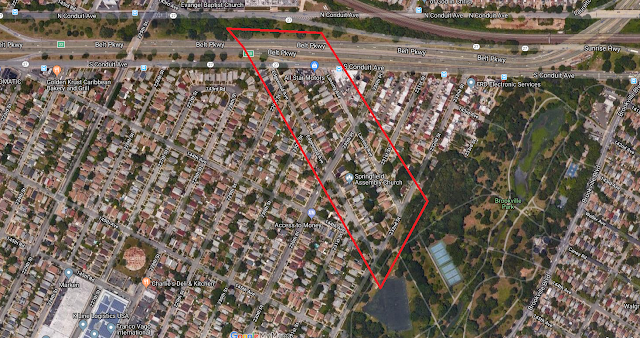 There are dozens of examples of scarchitecture in the Big Apple, and this one is of the most visually striking, given the grid system that exists to the southwest of here. Lansing Ave & Edgewood Ave, and the houses on these streets diverge from the grid as a result of a long abandoned Long Island Railroad which hasn't been used since 1934.

Los Angeles was once home to an extensive streetcar and interurban system, and many relics of the line and its railroad past still haunt the city.

The aptly named Electric Ave is one such example, as it, along with Irving Tabor Ct, create a wye where another Pacific Electric Branch to Santa Monica diverged from Venice Blvd en route to Venice Beach.

As I've talked about plenty, and a large part of my blog, Chicago's industrial history is well represented in its architecture and visual cues from railroad lines, stockyards and steel mills long gone. This shows many of the rights of way of the Indiana Harbor Belt Railroad's paths through the city.

The two largest railroad abandonments in the City of Houston ceded way for two of its largest freeway projects; The Katy Freeway and the Westpark Tollway. 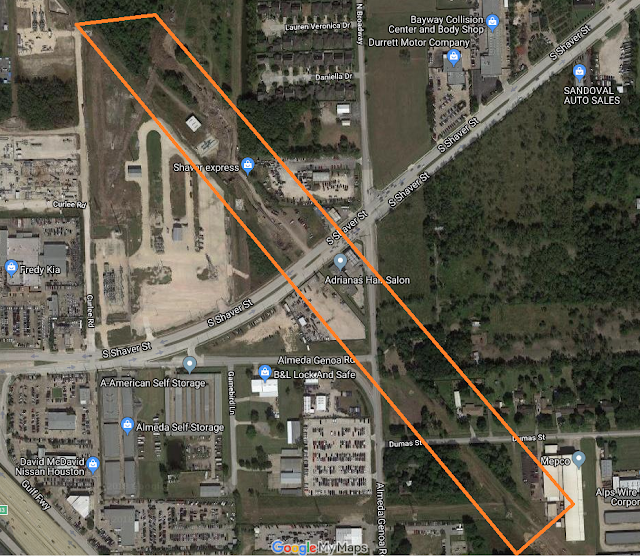 And yet, in spite of building over its history, it can't hide everything. The right of way of the long abandoned Galveston-Houston Electric Railway is still quite visible, and obviously influenced the building which now has Adriana's Hair Salon in it!

Even Phoenix, the desert outpost turned metropolis, has some scars to show the world. But admittedly, not as many as other cities on this list. 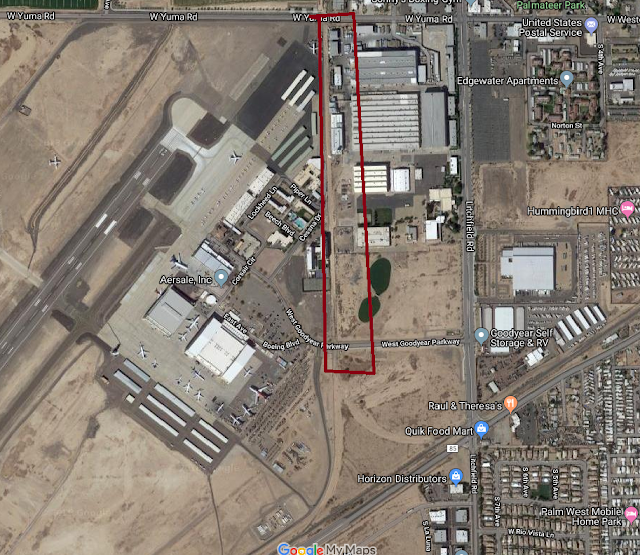 A former branch of the Southern Pacific Railroad (with a wye at the bottom) is perfectly visible between the airport and industrial areas, cemented in the desert terrain.

The Philadelphia area is full of abandoned railroad lines, old alignments of road, and plenty of scarchitecture. The Rail Park keeps some of this history alive. But for other lines in its history, sometimes you just have to look a little closer... 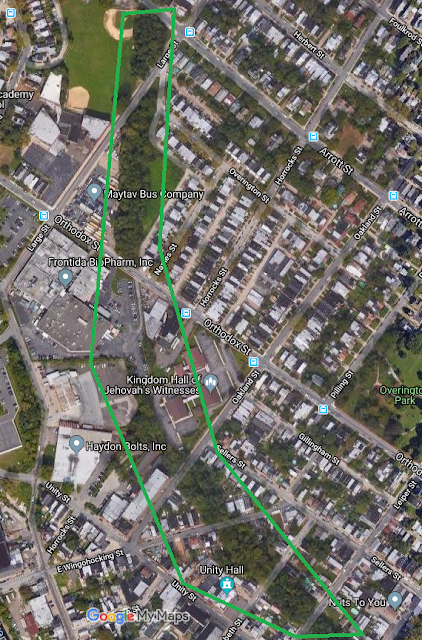 A branch of the Reading Railroad can be easily traced in the awkward construction of the buildings it once paralleled.

While obviously more examples of scarchitecture exist in rust belt cities, the Sun Belt is far from exempt from the phenomenon. 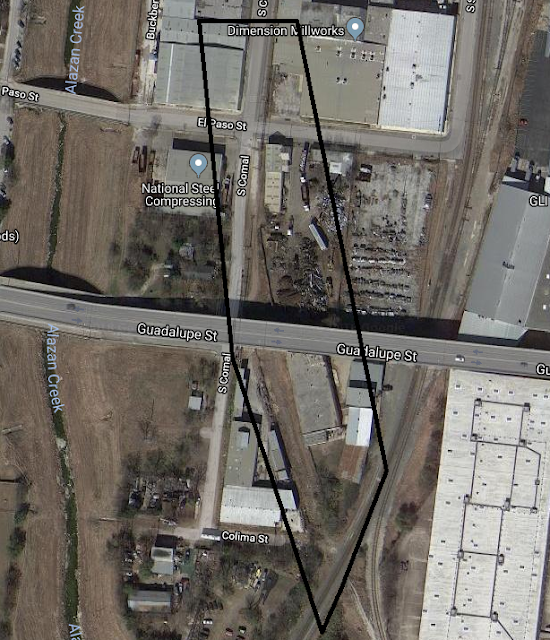 A small branch line from the still active junction served an industrial area on the west side of downtown San Antonio, causing the building south of Guadalupe to be built beside it.

You can view San Diego's skyline across the San Diego Bay in Coronado, CA, right in the path of a former right of way of the San Diego & Arizona Eastern Railway. 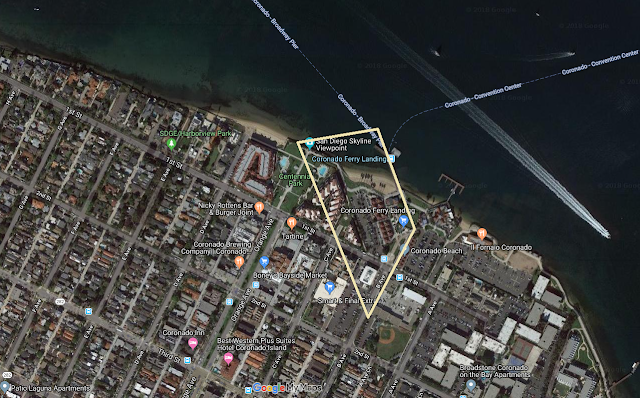 An industrial park west of downtown was once served by a small branch of the Texas & Pacific Railroad, leading to several curved buildings on Quebec St. This happens to be one of my favorite examples of scarchitecture and is a can't miss.

Before it became the largest city in Silicon Valley, San Jose had quite a manufacturing history, which is still evident in some of the satellite imagery of the city. 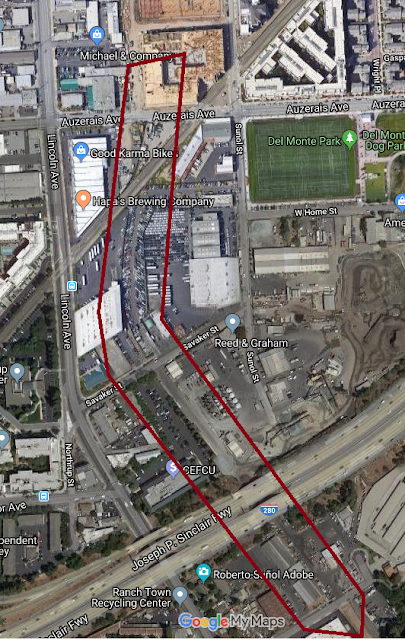 A long abandoned branch of the Western Pacific Railroad nonetheless influenced the design of a parking lot and several different industrial buildings just south of downtown.

Another Sun Belt City. When you think about the 15 largest cities in the US, does Austin ever come to mind? Does Detroit, Cincinnati, Pittsburgh, or St. Louis, perhaps? Each of those cities for one reason or another has some excellent scarchitecture examples that will nonetheless have to wait for another blog. All that said however, Austin, like every major city, has some architectural scars. 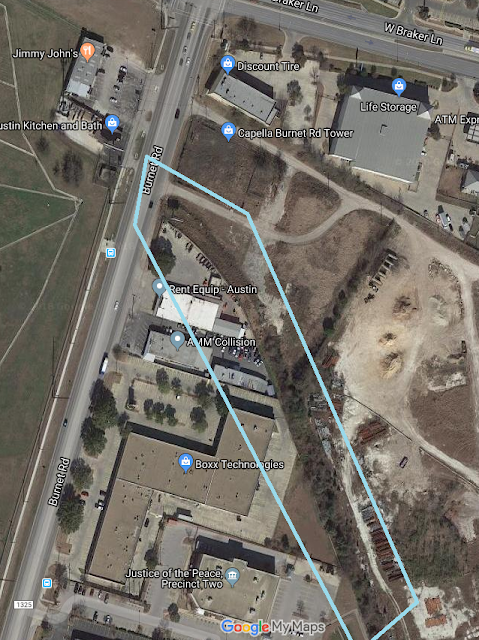 An otherwise unremarkable former spur off of the Southern Pacific on the city's north side influence the adjacent parking lots, as well as a couple buildings in one of the few examples of scarchitecture in the entire city. 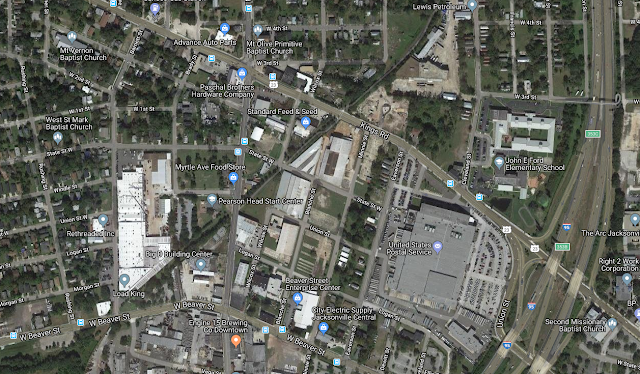 A branch of the Seaboard Air Line snaked around the city of Jacksonville, from a junction to a railyard. Today, much of the right of way is the S Line Greenway. But it's quite easy to tell from satellite imagery that this was much more than a simple walking path back in the earlier days of the city.

While San Francisco actually has a ton of scarchitecture, including some interesting examples discussed by others, I chose to focus on the Embarcadero and Piers on the north end of the city, which were once used extensively by the San Francisco Belt Railroad. This is one of San Francisco's landmarks, now served by light rail, and transformed from an industrial area to a mixed industry and tourist destination. It's not exactly scarchitecture, as it can easily be argued that the Embarcadero was more shaped by San Francisco's peninsula, but railroads undoubtedly played a large part in the area's industrial development.

And to think, it could have been a freeway today.

The aptly named Heritage Railroad Trail, a former Pennsylvania Railroad line to northern Ohio, is not the only clue to the railroad history that is hidden away in time on the north side of Columbus. 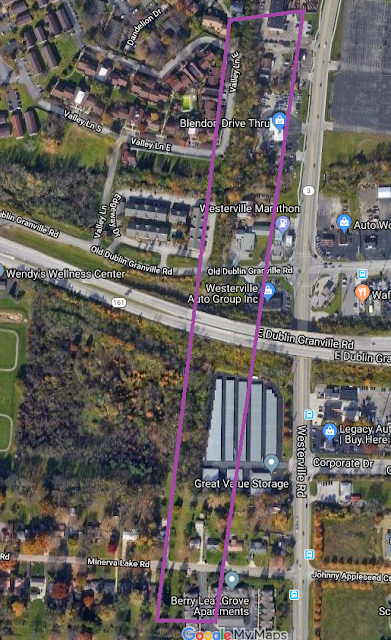 The buildings along the now trail were obviously inspired to align with the abandoned right of way.

So actually, Fort Worth, TX is the 15th Largest City in the US; but I already did an example in Dallas and decided to go with Indy to finalize my list. Indianapolis, much like other Midwestern cities, has dozens examples of scarchitecture from the many abandonments within its city limits. 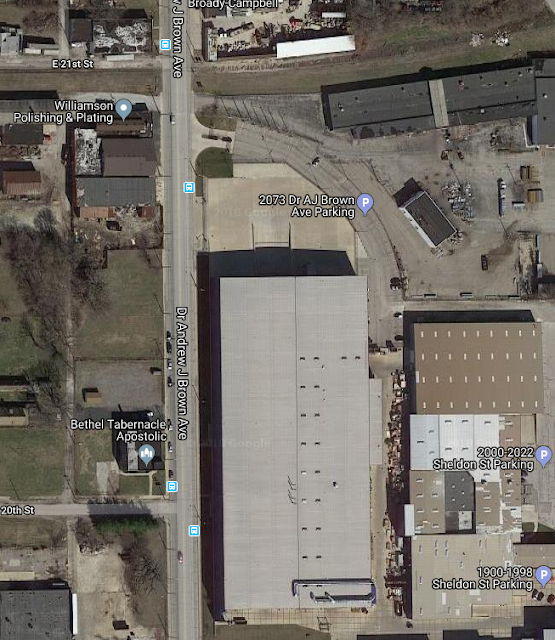 And even though the Monon Railroad is long gone, a spur from a tiny branch of it can easily be traced in the satellite imagery of the city today, in addition to many other examples.

Time leaves scars in ways that might not always be recognizable in the view from the ground, but can easily be spotted from above. I hope you enjoyed today's blog, and as always, thanks for reading!
abandoned architecture Chicago exotic destinations Forgotten Railroads of Chicago history maps New York City Pennsylvania pictures rail-trails rights-of-way scarchitecture

The Sometimes Train Tracks of Sunset Beach, as Atlas Obscura refers to them as, are old news to anyone whose followed abandoned railroad tracks for any length of time, but in 2014, it was one of the most fascinating stories I had followed that year. In that year, the railroad history of Cape May was revealed in the washing ashore of a former beach track of the Delaware Bay & Cape May Railroad. In low tides, the tracks have been revealed a couple times after their initial rediscovery as well. The fact that railroad tracks could randomly appear on a beach with little explanation was an amazing thought to me, and definitely impacted my eventual study into the abandoned railroad network of the world. Even stranger, they aren't the only "sometimes train tracks"; the phenomena also occurred as recently as 1997 at Illinois Beach . Image: CapeMay.com So what is the story behind these sometimes tracks, nearly seven years after they first erupted from the southern New Jersey s
Read more

While much of the former US 66 is drivable in one way or another, especially in Illinois, there are some parts are not. One of the first such roadblocks for would be travelers heading from Chicago to Los Angeles via the Mother Road, now known as Joliet Road, comes just outside of Chicago in McCook, IL, where the former highway is closed between 55th St and East Ave, and has been for over two decades. Image: Google Maps at 55th and Joliet Rd in McCook, IL The land that the quarry would eventually take over was part of Stinson Airport in the early days of Route 66, dating back to before 1930. ( Location on our Abandoned Airports map ). 1938 USGS Aerial Imagery The quarrying on the south side of the road would force the airport's closure in 1958, when quarrying began on that site as well, leaving both sides of Joliet Road exposed. In 1998, cracks began developing in the roadway , and rapidly grew into pavement buckling. IDOT was forced to close the road , making traffic have to
Read more