Just as Video Killed the Radio Star, so too did the highway kill the railroad, or at least some of them.

Now without trying to shoehorn some early 80's pop culture into my blogs, the more nuanced take is that highways built upon existing railroad networks and certainly disrupted the rail industry, but that doesn't mean railroads aren't highly profitable even today. Still, if one takes a look at the abandoned railroads map in the Houston, TX area, you'll see rights of way used to exist where three freeways exist today, and that's the subject of today's blog.

At least in one case, the freeway did not come until over a decade after the railway was abandoned.

The Katy Freeway is one of the widest freeways in the world in spots. It is signed as Interstate 10 between Houston and Katy, TX. I-10 continues east to Jacksonville, FL and west to Santa Monica, CA.

While the freeway has existed since the 1960's, it was expanded to its current size beginning in 2003, using the adjacent right-of-way of the abandoned Houston to Katy railroad line, first constructed by the Missouri-Kansas-Texas Railroad in 1893, and abandoned by Union Pacific in 2002. However, the project had been proposed much earlier than when groundbreaking finally began, according to this 1997 article.

A YouTube Video preserved the operations of this line as they were in 1985, shown below.

The line now ends in Katy, when I-10 curves north to use the recently abandoned right-of-way. Much of the Westbound I-10 Frontage Road is built directly atop the old line. A Missouri-Kansas-Texas Railroad Museum still exists in Katy, a few miles west of the abandonment, but along the same right of way.

The Galveston-Houston Electric Railway ran between its namesake cities along a streetcar line, which generally followed today's I-45.

In service from 1911 to 1936, it completed the 50 mile journey between the two cities in just 75 minutes, being recognized as the fastest Interurban Railway in 1925 and 1926. From 1936 to 1940, the Houston Electric Company continued to run trains between downtown and Park Place Blvd. 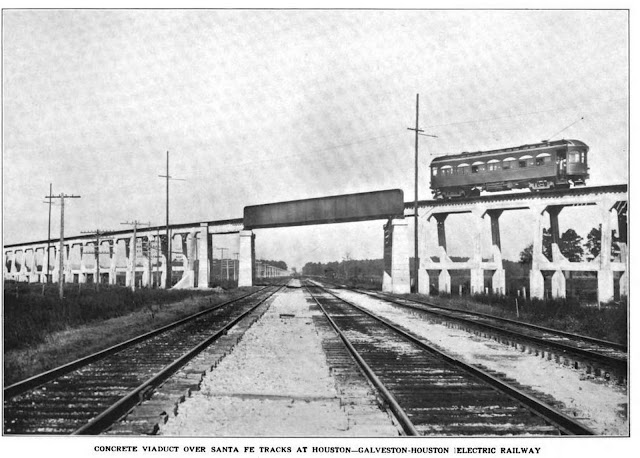 As early as 1930, however, plans for a superhighway along the corridor began to germinate. And in 1948, the Gulf Freeway was dedicated, which at that point was still unnamed, and going by the "Interurban Expressway" moniker. By 1952, the first stretch of the road was open.
In the late 1950's, this became part of Interstate 45. While much of the Gulf Freeway used the old right of way, there are noticeable diversions that create scarchitecture that can be seen even today on satellite imagery!
San Antonio & Aransas Pass Railway, Southern Pacific
Much like the Katy Fwy expansion, the Westpark Tollway owes its existence to an abandoned railroad right-of-way being converted into a freeway.
In this case, the abandoned corridor ran between downtown Houston and Eagle Lake. The line starts just east of I-69/US-59 Downtown, then makes a westerly turn that neatly follows I-69 to the Westpark interchange, where the right of way was in the exact same location as the Tollway is today.
West of the Westpark, the line follows roughly the path of Farm-to-Market 1093. Further west of Wallis, TX, the rails are still in place to Eagle Lake, but the line is out of service.
Construction of the Westpark began in 2001, opening in 2004, which is when the railroad was abandoned by Union Pacific in the Houston area.
The line got its start in the 1880's as the San Antonio and Aransas Pass Railway before being consolidated into the Texas & New Orleans system, a Southern Pacific subsidiary. A bridge over the Brazos River still stands post-abandonment, but is unused after railroad operations ceased.
Thanks as always for reading!
abandoned highways history Interstates interurban pictures scarchitecture Texas
Location: Houston, TX, USA