Cabooses On Display Around Chicago

By FRRandP January 25, 2019
The caboose is the ultimate relic of a bygone era in railroading. All but completely removed from revenue service, most cabooses today sit idle as reminders of railroads which once traversed this country. They frequent museums, stations, and the yards of the random railfan.

There are still some cabooses in service, usually for local operations, where an operation requiring heavy switching can benefit from a crew at the rear of the train, which is the case for the Santa Fe caboose above.

Cabooses were used until 1982 for safety reasons, and to transport crew. The US Government deregulated their use, and as such, they became nearly obsolete as crew members dwindled from an average of 7 per train, to an average of 2 today. End of train devices and cars are now the norm, and what would wind up replacing cabooses, which allows both engineer and conductor to ride in the front of the train.

There are a number of cabooses around the suburbs of Chicago, sitting idle. A couple are in safety towns in Naperville and Romeoville, something that has fascinated me since I was a kid. I'm certain there's also more than what I've photographed, as even yesterday I was made aware of one in Arlington Heights.

This caboose sits idle near where the Chicago Aurora & Elgin interurban ran through the St. Joseph Forest Preserve, once a park owned by the McCormick family. Two historical plaques adjacent to it tell the story of the CA&E, as well as how the caboose came to the farm, won at an auction sometime in the late 70's. 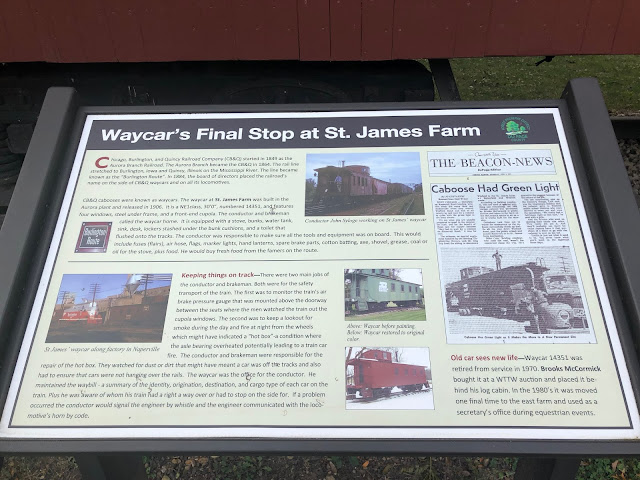 Located near Chessie's Restaurant, which was once an ice house, this historic caboose helps with the aura of the railroad, as part's of Chessie's is designed to look like the interior of a dining car.
Chessie's is located just south of the junction of the Chicago & Northwestern (now UP), and the Elgin Joliet & Eastern (now CN) lines, and while you might catch a CSX train using the trackage, the Chessie had no presence in Barrington.
3) Grand Trunk Western Caboose - Volo Auto Museum
This caboose is a recent addition to the amazing Volo Auto Museum. What makes this especially interesting is that the caboose is open to view from the inside, and the museum has done a good job of making it comparable to what life was like for railway crew members during their use.
4) Milwaukee Road Caboose - Rochelle Railroad Park
Rochelle Railroad Park sits at the junction of two active mainlines for BNSF and UP train traffic, and as such is a magnet for railfans. A few historic pieces are on display, as is a crossbuck.

Sadly, this caboose sits on an overgrown section of the park on the other side of the street. Personally, I think it needs a little TLC. It is partly for this caboose for why I did not come back impressed from my visit to the park.

5) CB&Q 13690 in Aurora, IL
Another CB&Q caboose sits idle just outside the Aurora Transportation Center. Near it lies the historic Aurora Roundhouse. This marks the end of the current BNSF Railway and "Racetrack", as the mainline becomes dual-tracked west of Aurora.
6) Elgin Joliet & Eastern Caboose, Plainfield, IL

At a depot adjacent to the ex-EJ&E track sits a reminder of Plainfield's heritage. Another railway, the Aurora Plainfield & Joliet interurban railway used tracks on the street just off of this location.
7) EJ&E 522 at Morris, IL
Another EJ&E caboose is housed in Morris, IL. It is unclear if the EJ&E ever ran through here, although their main activity was located along a beltway away from the City of Chicago. The active tracks immediately north of here are currently BNSF tracks.
8) Oakton Junction Caboose - Oakton St, Arlington Heights, IL
This ex-Rock Island caboose sits dormant near an empty lot off of Oakton St in Arlington Heights. Originally a shopping center, it's both a reminder of the Rock, and the only remaining structure in the lot. It sits across from a chemical manufacturing plant.
As an aside, the two preceding cabooses represent some of the extremes in temperature from my photos. The Morris photo, taken in May, was during an unseasonably hot day where the temperature was 95 degrees, and the Arlington Heights photo was taken when it was -2 outside!
9) Tim Wallace Landscape Supply Caboose - Bolingbrook, IL
Bolingbrook's "other" railroad, aside from the abandoned BNSF spur, is another that piqued my interest growing up. An ATSF caboose was purchased and installed at a landscape company on the west side of town, far from any railroad, past or present. There were reports of this becoming an ice cream parlor awhile back, but I haven't heard anything recently about that. The hopper and crossbuck were installed within the last few years.

10) Cotton Club Caboose - DeKalb, IL
Who would've though a clothing alteration service would be home to a caboose? It's owners must be railfans. While the store does sit near very active Union Pacific tracks, those are on the opposite side from the parking lot where this caboose calls home.
11) Wabash Caboose - Orland Park, IL
This caboose is painted in Wabash colors for the once owner of the adjacent now-Metra tracks. But if you look closely, you can see that it actually spent it's life with the EJ&E.
12) Fox Lake Caboose - Private Residence
Running through Lake County, the Soo Line is now part of Canadian Pacific. As this caboose is located on a private residence, I don't have a better picture of it, and won't disclose the location. It is visible from the street, so I did not trespass to get this picture.
13) Lake Villa Soo Caboose - Lake Villa
In a park on the southwest corner of Grand Av and Fairfield Rd lies a Soo Line Caboose, which is also a PokeStop, for those who play Pokemon Go. The Soo Line ran a couple miles north and east of here, as is today's Metra North Central Service.
I'm sure there's plenty of other cabooses in the area, and there are some other examples of Rolling Stock on display. I have some on my Railroad Points of Interest Map, a map of POI's in the railroad industry that, like my more famous Abandoned Railroads Map, I'm working on at my leisure. And of course, there's still much more to add!
As always, I hope you enjoyed today's blog, thanks for reading!
caboose Cook County DuPage County Forgotten Railroads of Chicago Lake County Milwaukee Road railway