The Milwaukee & Madison Railway was one of the early predecessor railroads of the Chicago & Northwestern Railway, incorporated in 1880. By 1882, the 80 mile trek between the two Wisconsin cities was complete.

This original line is mostly abandoned between Waukesha and Cottage Grove, WI. The ROW is now the Glacial Drumlin Bike Trail, with the exception of a small section of track that survives northeast of Jefferson, WI. 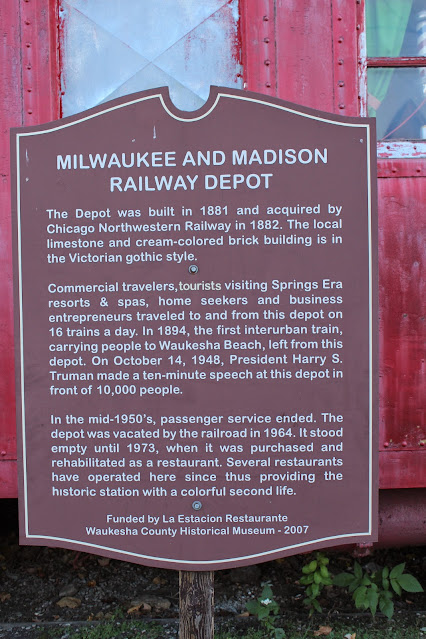 The following excerpt comes from Wisconsin's Historical Marker at the Depot in Waukesha, WI.

"The Depot was built in 1881 and acquired by Chicago [sic] Northwestern Railway in 1882. The local limestone and cream-colored brick building is in the Victorian gothic style.

Commercial travelers, tourists visiting Springs Era resorts & spas, home seekers and business entrepreneurs traveled to and from this depot on 16 trains a day. In 1894, the first interurban train, carrying people to Waukesha Beach, left from this depot. On October 14, 1948, President Harry S. Truman made a ten-minute speech at this depot in front of 10,000 people.

In the mid-1950's, passenger service ended. The depot was vacated by the railroad in 1964. It stood empty until 1973, when it was purchased and rehabilitated as a restaurant. Several restaurants have operated here since thus providing the historic station with a colorful second life."