According to the 1929 USGS Jackson Park topo map, there was a spur line from the still-existing Illinois Central tracks west of Lake Shore Dr to the Field Museum. It went around Solider Field and where present-day Museum Campus Dr is today. By 1958, the line was no longer present on topo maps.

But this line actually served another lakefront institution: the Shedd Aquarium. It is an open question as to whether any of the other buildings used it, although it would most certainly come in handy today to transport fans to/from Bears games.

This was a rail line used by the John G. Shedd Aquarium for their custom made Pullman car, The Nautilus, to transport fish and crew members. "You would have seen the Nautilus railroad car on temporary tracks next to the building if you’d attended Shedd’s opening ceremonies on May 30, 1930. It had just returned from Key West on a collecting trip for reef fishes for the tropical saltwater gallery.

Built in 1929 by the Pullman Car Works in Chicago for about $30,000, the Nautilus was custom fitted with cypress and metal containers for animals and a life-support system of pumps, air compressors, electric refrigeration coils and steam heat for another $10,000 to transport freshwater and marine fishes and invertebrates from cold, temperate and tropical waters. Fully loaded, the car carried 4,500 gallons. It also had modest living quarters for the six-person collecting crew.

The Nautilus was so specialized that the manufacturer stated that it was doubtful anything like it had ever been built before.

From its maiden trip in April 1930 until it was retired in 1957, this rolling aquarium traveled about 20,000 miles a year to Maine, Florida and California as well as around the Midwest, carrying an amazing array of fishes, including Australian lungfish Granddad, back to Chicago to delight and educate aquarium guests.

The aging car was replaced with a higher-speed stainless steel Nautilus II, which ran between 1959 and 1972. Today Shedd’s research vessel, the R/V Coral Reef II is the basecamp for collecting trips as well as research expeditions and educational programs including our High School Marine Biology classes." (Shedd Aquarium)

One of the many logistical issues one might not think of with regard to the aquarium was transporting seawater. The Great Lakes are of course, freshwater lakes, so seawater for the Shedd's saltwater exhibits had to be transported via railcar from the ocean. It apparently took twenty round trips to transport the requisite amount of water. 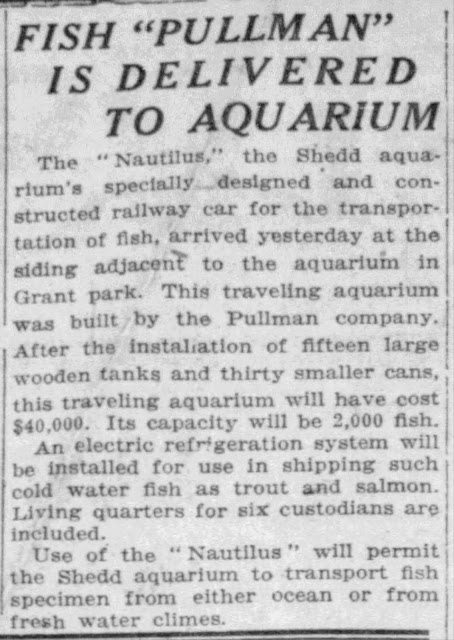 The line to the Shedd doesn't seem to appear on a 1938 aerial photo of Chicago, so its likely that this track was temporary for construction of the lakefront, and perhaps some of the buildings nearby. What a shame, it would make going to Bears games at Soldier Field a lot more convenient and accessible via rail. Sadly, the only way to go to Bears games on the train today would be if they relocate to Arlington Heights....

Amazingly, the Nautilus has been preserved at the Monticello Railway Museum in downstate Monticello, IL, but I sadly missed it on my visit a couple years ago. I guess we'll just have to go again!