All Roads Lead to Normantown

By FRRandP March 29, 2021
Growing up in northern Will County, I noticed there was both a north-south and east-west road named Normantown, except that they didn't meet or intersect in any appreciable way, as far as I could tell at least.
After doing a bit of research, I'd discovered that Normantown was a stop on the EJ&E Aurora Branch, and was located at the junction between the Aurora Branch and the mainline, and that these two roads sort of met, as the N-S Normantown Road ran through the area, while once could easily trace 127th Street to the present-day E-W road.
I find this fascinating because I can not think of an example where two other unrelated roads are named for such an obscure area, so that's what we're going to explore today.
Normantown is still shown on some maps, but apparently was never more than a stop on the line, and never developed into a village. Today, the area is part of the Village of Plainfield, although some properties are unincorporated. For a stop that never materialized into a village, however, it has an interesting history, as in 1887, it was the first stop completed on the Joliet Aurora & Northern Railroad, an ancestor road of the EJ&E. An even earlier ancestor of the JA&N was interestingly named the Gardner, Coal City & Normantown Railway. In this blog, we're going to explore the station, and the roads that led to the area.
This is Will County, published in 1955, writes of the area, "In the northwest corner of the county, on the Chicago, Milwaukee, St. Paul & Pacific [Gary Line] and the Elgin, Joliet & Eastern railroads, may be found the small hamlet of Normantown. It is served by the post office at nearby Plainfield. Through the hamlet passes US 30. Normantown is situated in Wheatland Township, which has a total population of 821. First permanent settler of the township is believed to have been the Reverend Isaac G. Foster, who arrived in 1837.
[The] only other community in Wheatland Township is the hamlet of Tamarak, located south of Normantown on the Chicago, Milwaukee, St. Paul & Pacific and the Elgin, Joliet & Eastern railroads. A Tamarack post office was opened here more than seventy-five years ago." The passage refers to the Milwaukee Road, who had trackage rights to Joliet on the track, but it was wholly owned by the EJ&E.
Little stations like Normantown along the railroad were common in the 1800's and early 20th century, as roads were quite poor, if they existed at all, and farmers lacked adequate transportation to transport their grain to markets outside of the railroad. Thus, little stations like this were a lifeline for many rural peoples during this time, and the vast majority of the United States was rural, as opposed to today when most of the population is either urban or suburban.
Another line, the interurban Aurora Plainfield & Joliet Railroad also served the area, paralleling the Aurora Branch tracks to the west.
The east-west, and larger of the two roads, started in Romeoville. Before Naperville Road was realigned in Bolingbrook to Weber Road, it traveled down what is now Dalhart Ave and met Normantown Road, becoming Naper-Normantown Road before ending at IL-53. Today, the road runs from IL-53 to beyond Weber Road.
In the present day, Normantown follows the south Frontage Road of Interstate 55, however, in earlier times it ran into Bolingbrook on what is now present-day Remington Blvd and 127th St to US-30. Despite being permanently closed, at least one street sign exists, albeit buried in brush along Frontage Road. 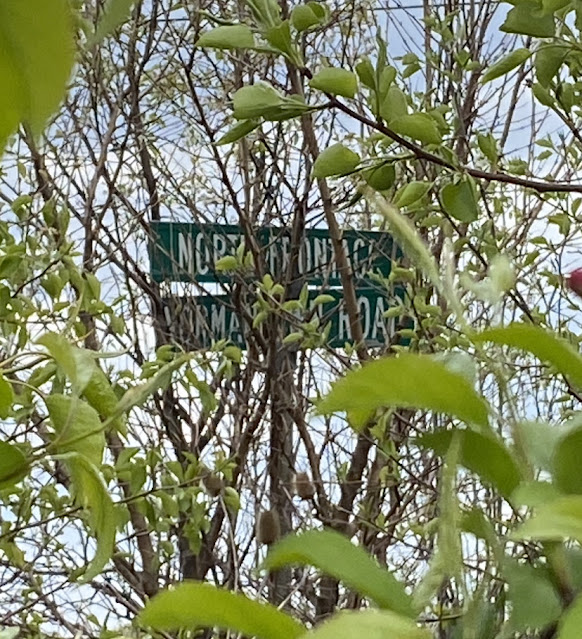 The north-south Normantown was far more sporadic, occupying the right of way just east of the Elgin Joliet & Eastern Railway tracks, starting at 127th St and continuing north to Wolf's Crossing Road.
What was once a continuous road was largely discontinuous by the time I was old enough to notice it, and while this Normantown Road still exists today, there's plenty of dead ends. It is a very small road, and closed permanently from just north of 119th St to just south of Wolf's Crossing, existing mainly as a paper road as opposed to an actual street. Between US-30 and 127th St, it was renamed 252nd Ave. A second, and more heavily traveled segment exists between Hafenrichter Rd and Montgomery Road in Aurora. What is quite interesting about this road is that the name Normantown seems to predate the station or settlement, as it is first mentioned, as far as I can tell, in the Wheatland Township Highway Commissioner Road Records in 1867.
Just north of Normantown on the road lies the Vermont Cemetery Preserve, an abandoned cemetery that is also now property owned by the Forest Preserve District of Will County.
So far, that's all I was able to find about Normantown and the roads that lead to it. If you have any more to contribute, please feel free to leave a note in the comments.
Thanks as always for reading!
abandoned ancient EJ&E ghost towns maps Milwaukee Road pictures RailROWMap railway Will County
Location: Normantown, Wheatland Township, IL 60585, USA