March 15, 2018
The Chicago area, is full of abandoned railroad corridors, as is pretty much all parts of the United States, as I've come to learn.
Plenty of these corridors have been converted into biking trails, or rail-trails, the most famous of which is the Bloomingdale Trail, otherwise known as "The 606". In my humble opinion, it's a nice hike but not my favorite trail to walk on. Having lived in the Chicago area my whole life, I've had the joy of being able to discover Chicago's historic railroads as well as its many active lines that are perfect for viewing trains!

The criteria I used to evaluate might be a little different than most people's, given that I'm seeing the trails through the lens of the railfan. The most important things for me, other than safety and cleanliness, are 1) How close the trail gets to other active rail lines. 2) How well the trail relates to the history of the railroad than once ran on its right-of-way, and 3) The area around the trail, and whether or not it has amenities and areas to explore. So without further ado, here's my list of the top 10 rail trails in the Chicago area. 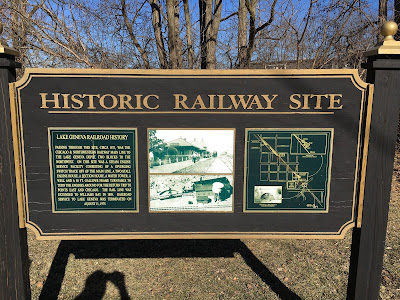 Although much of this right-of-way is still active between the two trails, I combined them into one given how it was once entirely the Chicago & Northwestern Railway. In Algonquin, the Prairie Trail goes around and under the IL-31 Bypass next to the Fox River and over Algonquin Rd, creating some excellent and unique views of the area. In Lake Geneva, the history of the line is well preserved both in the downtown area and along the path, it's also nice because the trail usually isn't too crowded, which can help get you away from the always crowded downtown area.
9) Henslow Trail (Rockdale, IL)


The Henslow Trail is a short trail occupying a small part of the former US Government Railroad Tracks in the former Joliet Arsenal. The highlight of this trail is the bridge over IL-53, which was the original alignment of the former US-66. Generally, this rural trail doesn't offer much in the way of views, but its historical significance to three major wars this country has fought, its proximity to perhaps the most famous road in American History, as well as the Abraham Lincoln National Cemetery make it a trail worth visiting for sure. 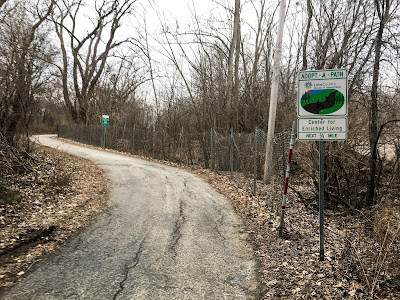 Occupying the former right-of-way of the Libertyville Branch of the Chicago North Shore & Milwaukee, the North Shore Bike Path primarily lies just to the south of IL-176. While the path itself is mostly treated as a sidewalk, there are some nice areas to walk over US-41 in Lake Bluff, as well as a trio of bridges in the Rondout area, where trail users walk over the Milwaukee District North Line and the former EJ&E Railway (now CN). I personally prefer this trail over the Green Bay trail which it branches from, since that trail doesn't really offer much that can't be seen from a Metra train or from local streets. 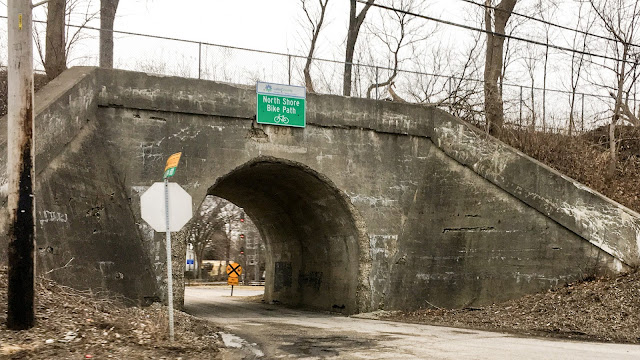 7) Bloomingdale Trail (Chicago)
A linear park built over an abandoned stretch of railroad on the North Side of Chicago is an example of a rails to trails project gone right. The area is experiencing plenty of growth and development near the trail, and the ability to walk over streets is both safer for pedestrians, and gives an opportunity to see the neighborhoods it crosses in a new light. My biggest complaint about this trail is that it doesn't really keep the history of the Milwaukee Road and Canadian Pacific line that once traversed its path. But it still is an interesting walk if you find yourself on the North Side.

In my opinion, the Skokie Valley Trail feels more like a railroad than the Bloomingdale, which is aided by the fact that within Skokie, you're literally on the other side of the station for the CTA Yellow Line, or the Skokie Swift. This former Union Pacific and CNW right-of-way goes through the Sauganash neighborhood of Chicago, through Lincolnwood and onto Skokie, while the abandoned ROW continues into Lake County, IL. 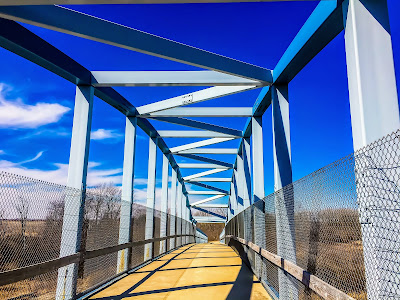 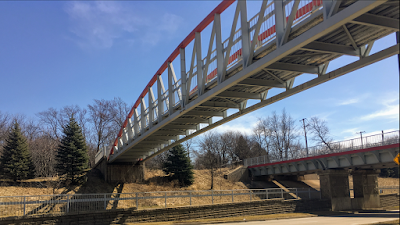 This trail uses the former "Gary Line" of the Milwaukee Road, as well as an interurban line which ran all the way to DeKalb. It has many bridges over the relatively congested roads in the Aurora and Sugar Grove area, and offers many unique views over its surroundings. A BNSF line can be seen and heard in the western part of Aurora on the trail. The southern part of the trail uses the northernmost right-of-way of the EJE line to Normantown, IL. 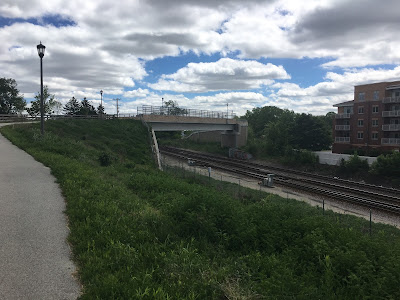 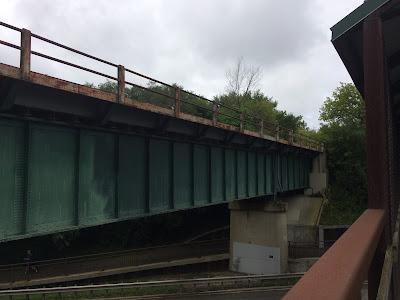 I believe this is the longest rail-trail outside of the Chicago area, whether it is or not, it is part of the longest abandoned right-of-way in Northern Illinois, extending all the way to Galena Junction. There is so much to see along this trail, my personal favorites are the view of the Union Pacific West Line in Lombard and the recently abandoned bridge in St Charles over the Fox River, which towers over the area. I hope it's incorporated into part of the trail someday. 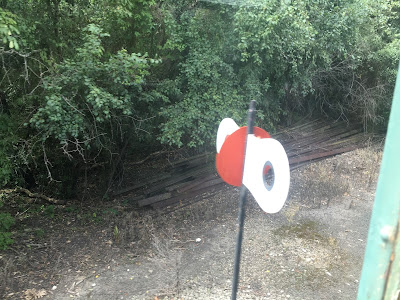 This is really perhaps one of the best rail-trails in the world for railfans. How many trails have a Trolley Museum with a heritage railway running right next to it? The trail incorporates the bridges of the former Chicago Aurora and Elgin Railroad really well, you can definitely get a feel for the history of the line, and that's before you pay a visit to the museum! What may seem cliche as a review of some other trails rings true here; the past is literally alive! The Fox River runs right next to it, and as such, this trail is prone to flooding, but that's about the only bad thing I can say about the trail. On a related note, this trail also links up with Red Gate Bridge, which goes over the Fox River, and allows pedestrians to cross under it, which is a really cool sight.

2) Old Plank Road Trail (Joliet to Chicago Heights, IL)
A walk on this trail is like seemingly walking back-in-time and yet well within the amenities and surroundings we're familiar with today. This trail incorporates the history of the towns it crosses through really well. A former Michigan Central and Joliet & Southern Traction Interurban line, this trail incorporates elements of the past while still being tied to modern times, which is an incredible feat in my book. The town of Frankfort is absolutely gorgeous at night, and the trail offers front door access to shops, restaurants and a local concert venue. Definitely worth checking out! 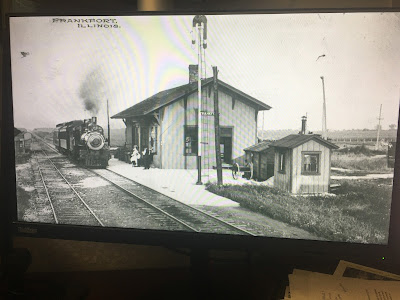 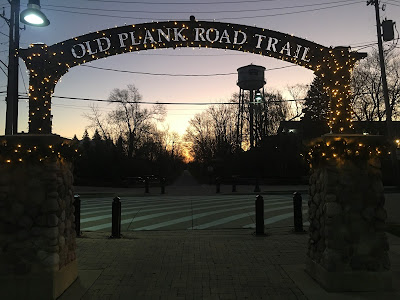 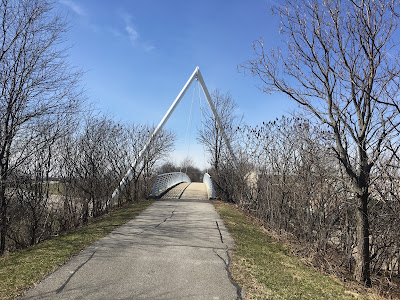 1) Illinois Prairie Path (Aurora & Elgin to Villa Park, IL)
This trail offers my absolute favorite view of all time, as a chain link fenced bridge allows you access over the very busy Union Pacific West line. It is an awesome feeling to view freight trains a few feet below you traveling fast, and one of the few places where you can hang out and do this safely! On top of that, the line offers many historical nods to the past. The trail also tends to go near downtown areas without actually entering them, offering peace and tranquility, yet also allowing accessibility to restaurants and Main Streets, an excellent balance for trail users. The trail enters Glen Ellyn on a bridge over I-355, IL-53 and the DuPage River, and is never too far away from the UP West line to get some really good shots of the line. This trail also connects with the Fox River Trail as well, so long distance bike rides are an option as well. I cannot recommend this trail enough. 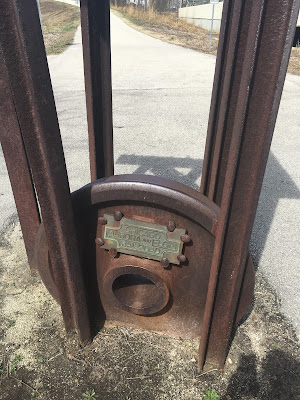 I hope you enjoyed my reviews and if you agree with me, great, and if not, I'd love to hear what you think are some of the best rail trails around Chicago!