June 10, 2018
A few months back, I posted a blog showcasing some examples of architecture built around what is now abandoned railroad lines, i.e "Scarchitecture". Thanks to the magic of Google Maps, it is now quite easy to find examples of this phenomena in all parts of the world.

It is generally easier to find examples of scarchitecture in major cities like Chicago, but its suburbs have a significant amount of interesting examples as well, especially the older, more industrial areas.

Thus, for today's blog, I decided to revisit the concept of scarchitecture and find examples of the phenomenon in the Chicago suburbs. 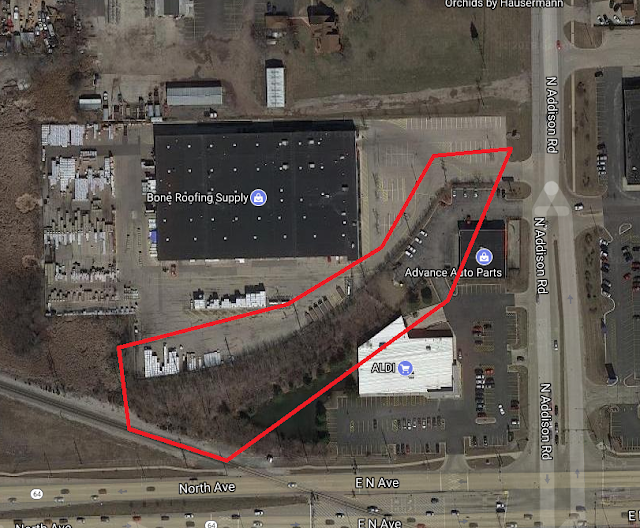 The Aldi at the corner of North Av & Addison Rd shows the remnants of Illinois' Addison Railroad, constructed at the beginning of the 20th Century, which ran from this spot, up Addison Rd, and ended a couple miles north, just north of US-20. The Addison Railroad was quickly bought by Illinois Central Railroad, and remained active up until around the 1970's. 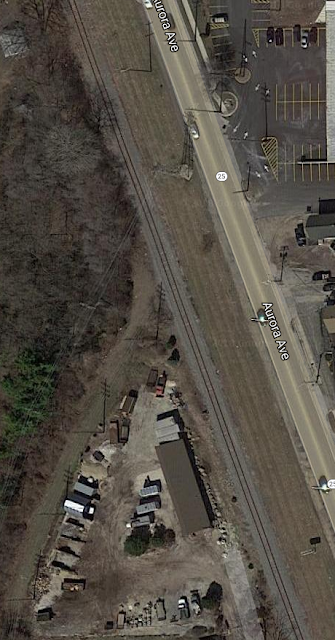 Much of the Chicago Aurora & Elgin Railroad is today's Illinois Prairie Path, however there are some sections which weren't suitable for trail construction, such as the area above. In this case, the property line between the former right-of-way and the area to its south is quite visible in satellite views. 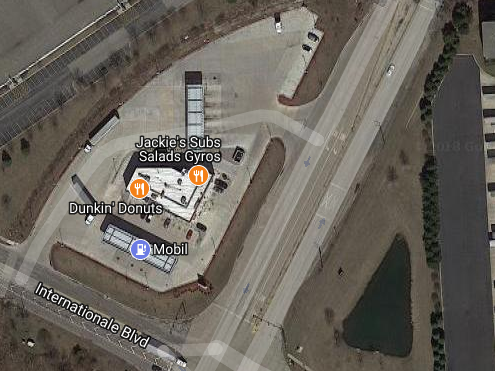 The Mobil Gas Station here is a recent addition to the area, opening in 2015. In its parking lot, the boundary between the abandoned Bolingbrook spur and the property line is quite visible. In this case, the railroad tracks are still there, but no activity has occurred on the railroad in over 20 years. 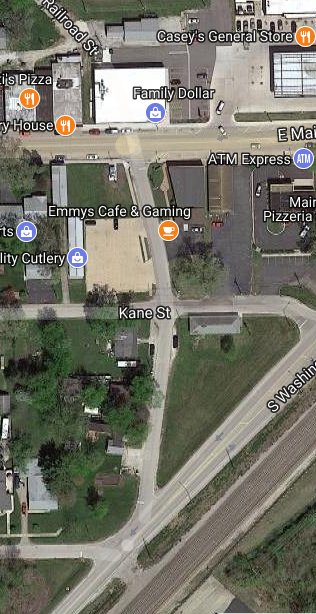 The existence of a long abandoned railroad is hinted here with "Railroad St" immediately southwest of "Round House St". As best I can tell, the railroad line that once ran through here has been abandoned since at least 1939 according to topographical maps, and yet, one can still see traces of the railroad in both the positioning of the road, and how the building in the center of the frame is parallel to Railroad St, and not a more common rectangular shape. 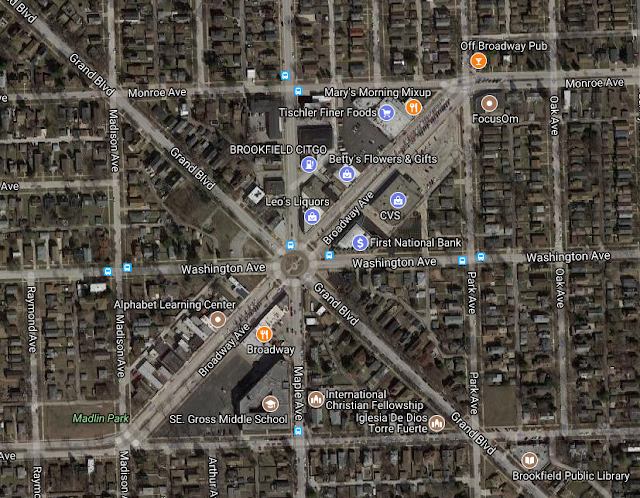 The Chicago & West Towns Railway was a streetcar system, serving the near Western Suburbs of Chicago until 1948. Running in the middle of Broadway Ave, the remnants of the route can still be seen in the large right-of-way that occupies the center of the road, despite the streetcar not operating for 70 years. 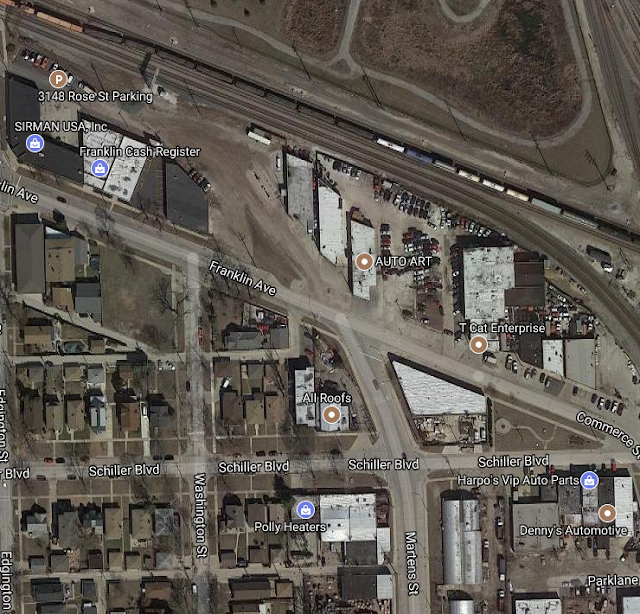 Due to its proximity to two large railyards, Franklin Park has a ton of railroad activity. A look on Martens St at Franklin Ave shows it used to have even more, as it was once a connecting railroad between two yards on the former Indiana Harbor Belt Railroad. 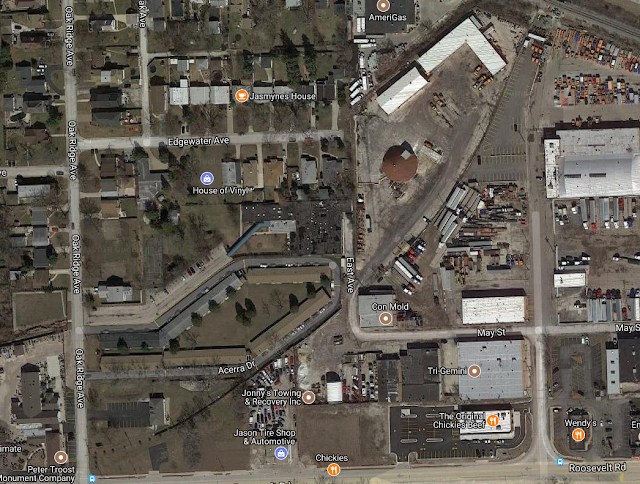 Mt. Carmel Cemetery was once served by the Chicago Aurora & Elgin Railroad. The line's primary service was for funeral trains, although it was also served as a stop between the cemetery and the main line at Bellwood, IL. Trains stopped serving the cemetery in the 1930's, yet satellite imagery still holds clues to the existence of this once gravely stop.

One of the reasons for the closure of the Mt. Carmel line was aside from the cemetery no longer wishing to be a stop on the Chicago Aurora & Elgin, another branch line existed immediately east, this one serving Westchester, IL.
This line was intended to extend west and eventually become the divergence point for trains running to Aurora. That never happened, as the Great Depression had a significant impact on the profitability of the line. While this line would survive longer, it too would be abandoned and leave a significant amount of scarchitecture still visible today. The Jewel at Mannheim and Cermak Rd was built within the former right-of-way. 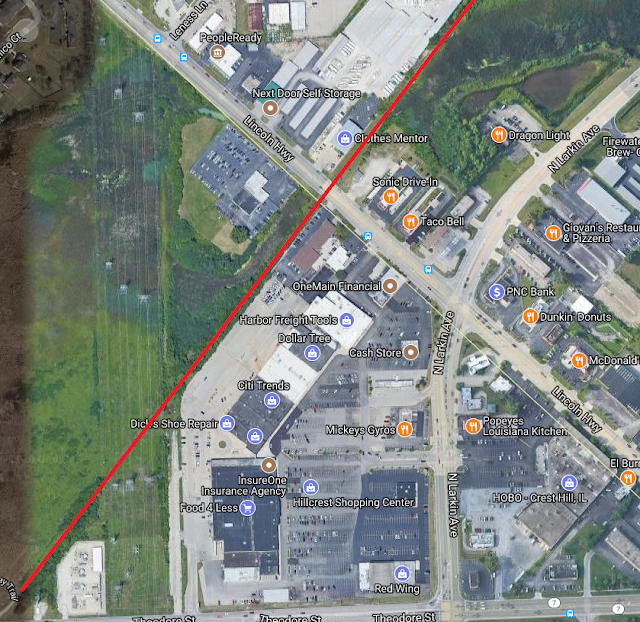 The Joliet Junction Railroad used this right-of-way from 1994 to 1999, itself taking over operations from the Elgin Joliet & Eastern Railway. Much of this has been converted into the Joliet Junction Trail, and although the section here is not trail, it's quite visible that there was once more than currently meets the eye in this area. 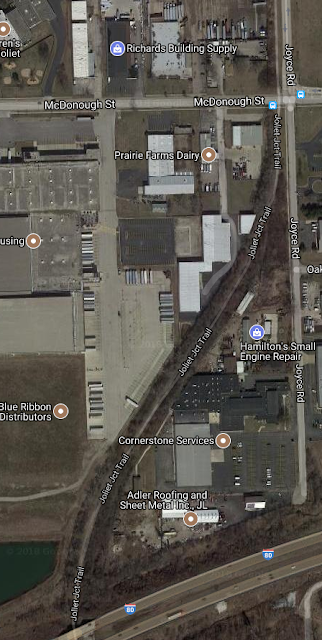 Another piece of scarchitecture associated with this line comes at its south end in Rockdale, IL near I-80, as the parking lot of Blue Ribbon Distributors as well as Cornerstone Services are both built at angles matching the former right-of-way of the railroad. 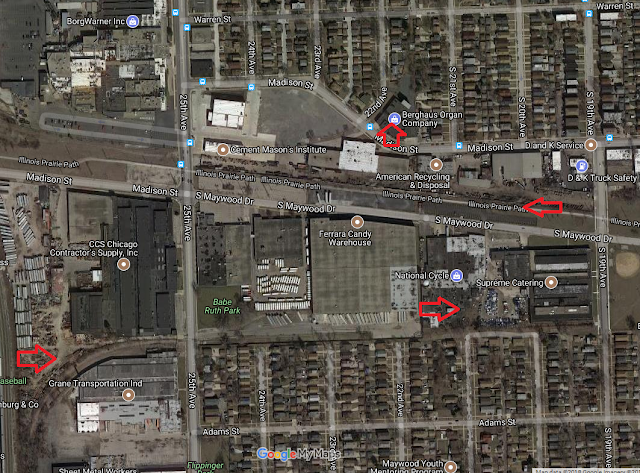 Bellwood is a classic example of a rust belt town. with an industrial past that is today in various stages of decay. There are many signs of scarchitecture throughout the town. In this view, one can see the remnants of a railroad spur which once served the building that is today National Cycle, as well as parking spaces for what once once a stop on the Chicago Aurora & Elgin Railroad, which is today's Prairie Path. A third example comes at the Berghaus Organ Company, where a spur route between the Chicago Great Western and the Chicago & Northwestern once operated. That same spur also leaves a scar at... 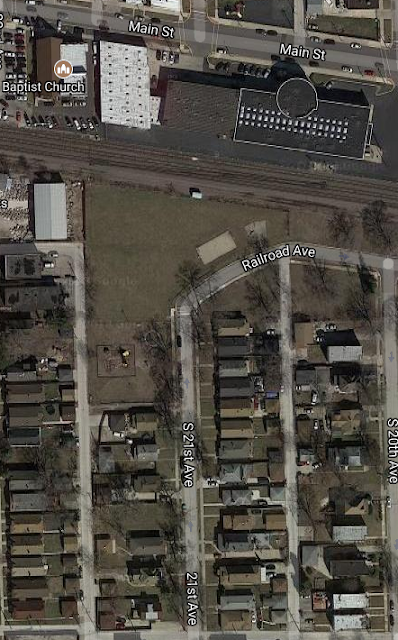 About mile north of Bellwood lies more examples of industrial decay in Melrose Park. The spur from Bellwood ran between 21st and 22nd Avenues. The houses which are now within the former right-of-way appear to been less densely built than those immediately east or west. 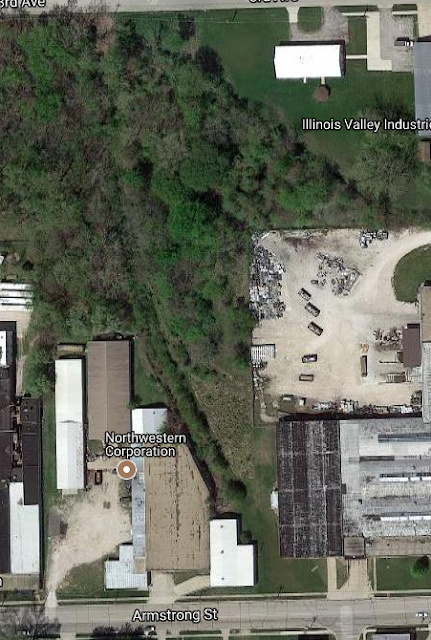 The remnants of a long lost Rock Island spur are nonetheless kept alive by the Northwestern Corporation building in Morris, IL. 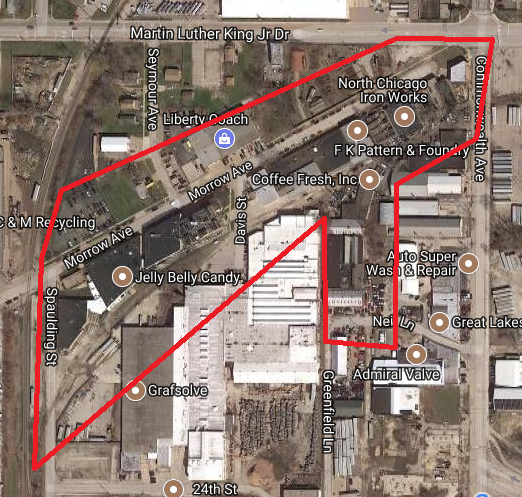 North Chicago, IL has an interesting railroad history, as near MLK & Commonwealth, the Elgin Joliet & Eastern Railway had an industrial spur line that isn't used anymore, although all the buildings near here show some examples of its past. There are a few pieces of railroad track in various sidings, although none have been used in recent times. This is also where the EJ&E intersected the abandoned North Shore Line, which ran along Commonwealth Ave before turning east, using the right-of-way of today's Bobby Thompson Expy. 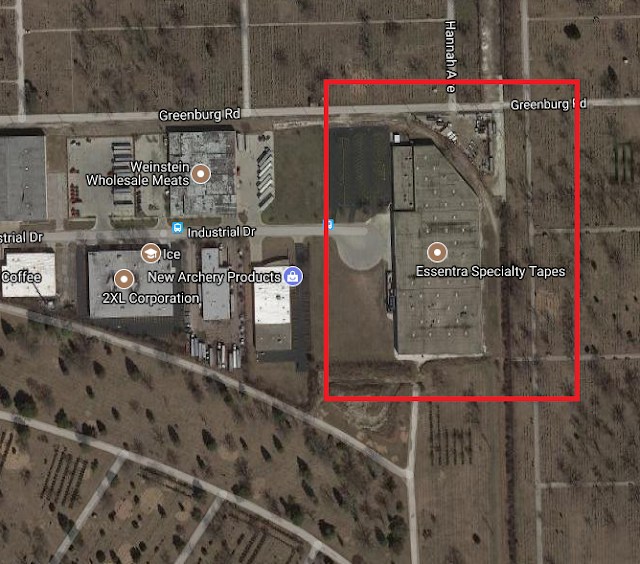 Up until 2012, Illinois Central (CN after 1995) had a railroad spur which began just south of North Riverside Mall at the main line and extended north to Forest Park, IL, immediately west of Harlem Av. As a result, what is today Essentra Supply Tapes still has a great example of scarchitecture on its northeast corner. The line was originally built as the Riverside & Harlem Railroad, but quickly became part of the IC. 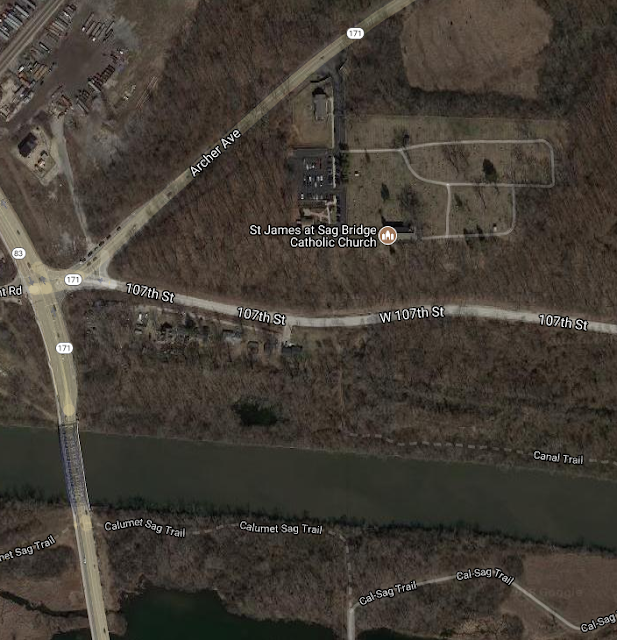 This example of scarchitecture isn't related to the railroad, yet it was interesting enough to talk about. St. James is the oldest continuously operating church in the Chicago area, in operation since 1833. As such, it has predated both the automobile and railroad industry in Illinois. One of the odd things about this church is that has an extremely long parking lot, relative to its size. Why is that? 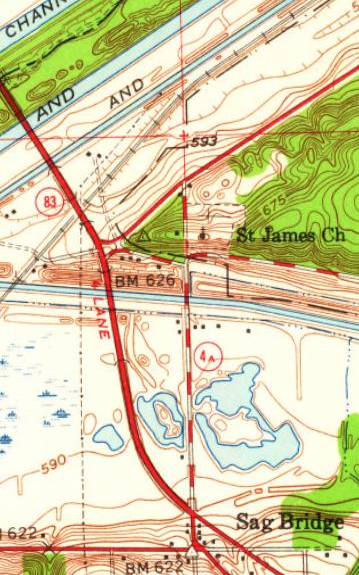 The answer is that its parking lot used to be Archer Ave (the former IL-4A). Before the current IL-83/IL-171 bridge was built, drivers would have to use the decommissioned bridge along IL-4A, which later became IL-171 in this area.

The 4 lane bridge that exists today carries both IL-171 and IL-83, and has been in use since the 1950's, leaving St. James as the only business on the original alignment. 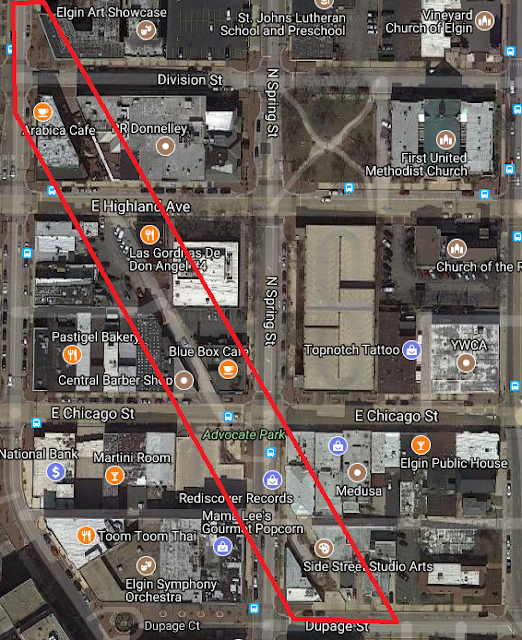 The Chicago & Northwestern Railway once ran through downtown Elgin, and this legacy is quite evident today. A line of odd-angled buildings exists between DuPage St and Grove Ave. Northwest of here, the Prairie Trail runs along the Fox River all the way to Richmond, IL. This particular stretch of railroad was abandoned in the 1990's. 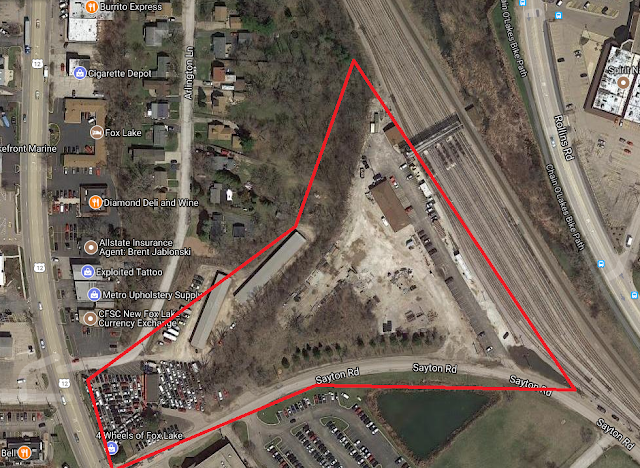 Finally, we come to what looks to be a Wye in Fox Lake, IL, immediately south of the end of the Milwaukee District North Line. This line is a remnant of the Ice House Days before the advent of refrigeration, and ice would be transported via railroad from Fox Lake (as well as many other lakes in the region).

The line used to run all the way to the lake, but was truncated after the 1920's. This particular stretch east of US 12 would be used by the Milwaukee Road up until the 1970's, and still leave a mark of its existence which can easily be seen today.

As with all my blogs, and with railroad history in general, there exists far too many examples to discuss fully in one blog, and I know I missed some examples of scarchitecture that exist in and around Chicago. Let me know if you know of any you'd like to share in the comments.
As always, thanks for reading!