By FRRandP August 11, 2018
The Chicago Great Western Railway linked the Midwestern cities of Chicago, Minneapolis, and Kansas City, with each branch meeting at Oelwein, IA. Originally chartered as the Minnesota and Northwestern Railroad within Minnesota, it eventually grew and merged to become the CGW in 1892. It was built later than many other railroads it competed with, leading to suboptimal routes and its eventual demise. In spite of this, I personally think the Chicago Great Western is an incredible name for a railroad, and it's one of my favorite abandoned train lines.
Its legacy survives today as part of the Great Western Trail, and today we're going to explore this line, or at least its route from Chicago to Oelwein.

Other than a small Canadian National Railway operation near DuPage Airport, a few industrial customers for Union Pacific between Tyler Rd and Kautz Rd in St. Charles, and a small operation serving the power plant in Byron, the entirety of the 147 mile former Chicago Great Western Railway line between Forest Park and Galena Junction is abandoned, making it the longest abandonment from Chicago by far.

The line extended from Chicago, on trackage which now leads to the Union Pacific Global 1 yard, and then followed a line immediately north of where the current Forest Park CTA station is today, paralleling the Chicago Aurora & Elgin Railroad, which itself is abandoned.

But before we see what the line looks like today, let's examine Chicago Great Western's history.

The Chicago Great Western was one of the last Class I railroads to be constructed, and as such, competing lines often had an advantage with regard to track location.

The business was thus modeled with efficiency in mind in an effort to stay afloat, using only one set of crews, and pulling very long freight trains, which is more akin to how modern railroads operate.
The line to Chicago began construction in 1886. This right-of-way actually had origins in the 1830's, as the Chicago St. Charles & Mississippi Airline Railroad was chartered, but never built. The rights were transferred to the Minnesota & Northwestern Railroad in the 1850's, who eventually got around to using the rights to build the road in 1884. Wanting to have Chicago in its name, by 1892, the Minnesota & Northwestern reorganized as the Chicago Great Western Railway, although it was headquartered in Oelwein, IA.
As you can see from the map above, the line had relatively few branches, and the divisions of the road would all meet at Oelwein.

Chicago Great Western would merge with the Chicago & Northwestern Railway in 1968, who would begin the process of abandoning the line in piecemeal for. The C&NW was itself merged into Union Pacific in 1995, who would abandon or put out of service much of the rest of the route.

But that isn't the end of the story, as the much of the right of way remains today as rail trails. The Illinois Prairie Path begins west of the parking lot for the Forest Park CTA, using the rights-of-way of the abandoned Chicago Aurora & Elgin and Chicago Great Western lines.

The two railroads diverged in Villa Park. The CGW took a more northwesterly path, through was at one time the headquarters for the Ovaltine company, which made cocoa powder.
Today, the factory grounds are condominiums. Isn't progress great? 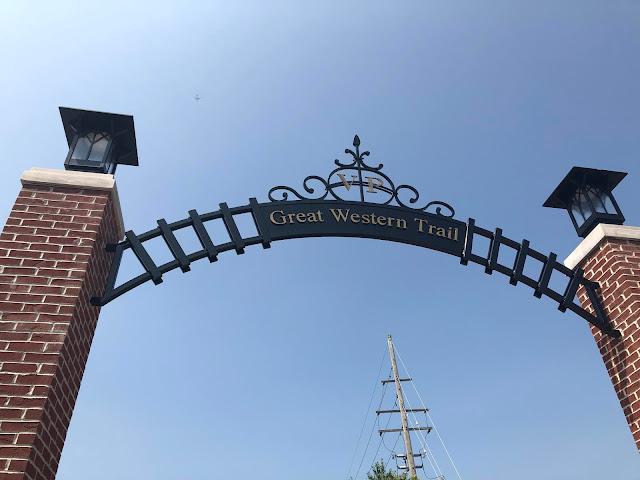 The Chicago Great Western right-of-way was quite duplicitous for the Chicago & Northwestern, as it passed through the very active Metra UP-West line, which traces its origin to the CNW as well. That the trail passes over this line, it makes for some great railfanning opportunities, and is partly why I love rail trails so much.


It would meet the CA&E once again, as the Chicago Great Western crossed the Chicago Aurora & Elgin Railroad Elgin Branch just west of Prince Crossing Rd.


The Great Western Trail then uses surface streets into St. Charles, given that the line is still in service
here, albeit as an industrial spur instead of the mainline. The Great Western right-of-way ran right through where DuPage Airport currently is today.


Past Tyler Rd, the right-of-way is still owned by Union Pacific, but the rails were torn up in 2011-ish, including the bridge over the Fox River in St. Charles.

The Great Western Trail uses the right-of-way again starting at Peck Rd west of the Fox, continuing all the way to Sycamore.


While the trail ends, the abandoned right-of-way continues all the way to Galena Junction, IL.
The CGW also had service to DeKalb via a spur from the mainline at Sycamore. This line largely paralleled the CNW tracks also heading south into DeKalb from Beloit, WI (which are also currently abandoned from Roscoe). This line was constructed as the DeKalb & Great Western Railway but it probably never carried that name into service. The service was shown on the official timetable of the CGW from 1896, shown below.


Another abandoned stretch of the line begins in Dubuque, IA and extends all the way to Oelwein, completing the former CGW mainline from Chicago to Oelwein. I managed to get some pics in Western Illinois, although I don't have perspectives between west of Sycamore and east of Kent. 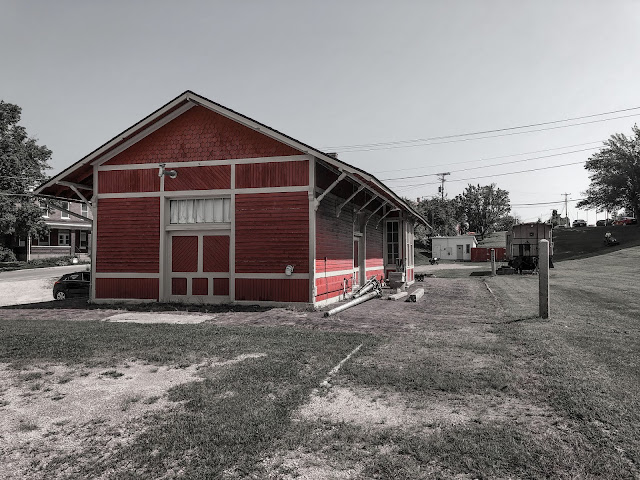 I was hoping to visit the Elizabeth museum, but unfortunately, they are only open on weekends, and I visited on a Friday morning.


West of Stockton, IL, the line traversed some of the most rugged terrain in Illinois, which isn't saying much, but the topography of Jo Daviess County, IL is quite hilly. It was at North Hanover that the line interchanged with the (very) small Hanover Railroad until 1934.
The railroad actually used a tunnel, called the Winston Tunnel, to traverse near the line's west end.
The tunnel was abandoned in 1972 after the CNW/CGW merger. Plans had the tunnel becoming a rail trail, but this was before the National Trails System Act was passed, and the land was unfortunately unable to be preserved. The tunnel sits dormant and sealed off from visitors today. Its a shame that this is nothing more than an abandoned train tunnel today; it would have made an incredible part of a rail trail!
A group of high-schoolers from Jo Daviess County filmed a YouTube video on the history of the tunnel and the CGW:


The line's western end is at what once was Chicago Burlington & Quincy right-of-way (today's BNSF Railway). The CGW used the same right of way, crossing the Mississippi River into Dubuque, where the lines diverged.

A 26 mile long rail-trail uses this right-of-way between Dubuque and Dyersville, IA as the Heritage Trail.

The abandoned line from Dubuque continued all the way to Oelwein, one of Iowa's many abandoned railroad lines, adding another 73 miles of abandoned right of way.
Further Reading: The Chicago Great Western Railway (IL) (Images of Rail)

As always, I hope you enjoyed today's blog, and thanks for reading!