Kinzua Bridge: Or How I Overcame My Fear Of Heights Walking on a Half-Destroyed 300ft Tall Railroad Bridge 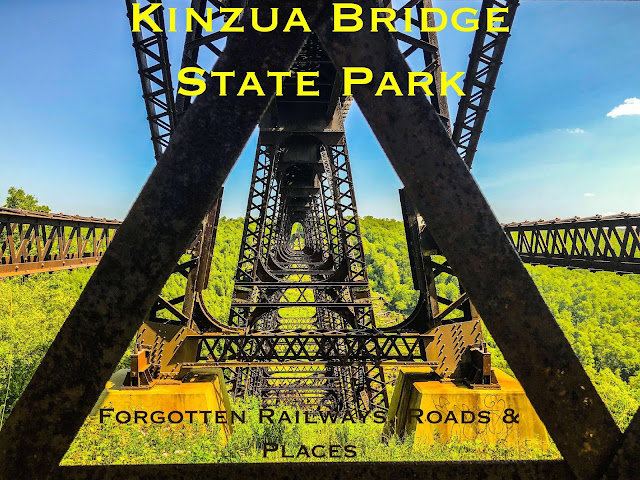 As promised in my last blog, I visited the Kinzua Bridge State Park. While I often say that pictures do not do justice to some places that need to be visited, I cannot stress that enough with regard to this bridge. The photos I'd seen online of the place didn't prepare me whatsoever for the experience. It is nearly impossible to capture in pictures just how high you are on the bridge.

And as someone afraid of heights, that made the journey and my walk on the bridge even more of an experience!
BACKGROUND:
The Kinzua Bridge, located in rural northwestern Pennsylvania was the fourth tallest railroad bridge in the United States when it was in service, according to Trains Magazine. Originally built in 1882 and rebuilt in 1900, this bridge was built to connect Bradford, PA with Mt. Jewett, PA on the New York Lake Erie & Western Railway, which later became the Erie Railroad. The bridge would be added to the National Register of Historic Places in 1977. 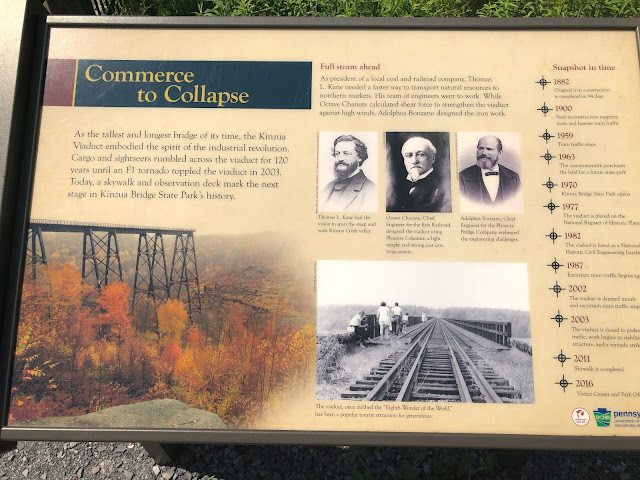 Once it was completed, it was immediately part of railroad lore, and considered the Eighth wonder of the World. According to George W. Thornton in Erie Railroad Magazine, excursion trains from Buffalo and Pittsburgh would route onto the bridge just for the view.

They had a slow go through the bridge, just as all traffic did. What I thought was a second set of tracks for narrow-gauge traffic was actually a safety feature of the bridge. The State Park and visitors center does a fantastic job of keeping the history of the area alive. 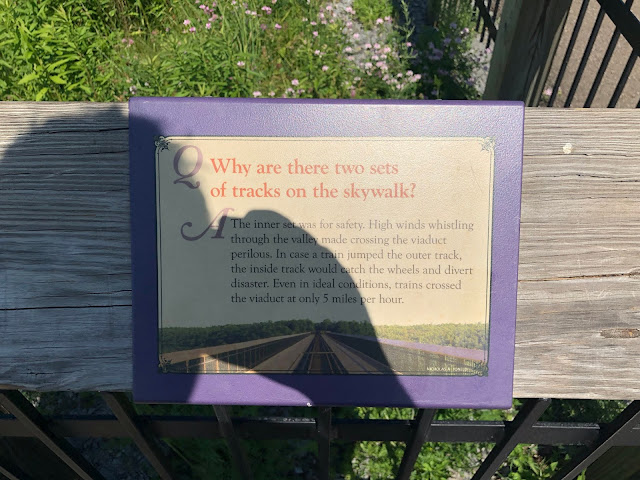 Trains could only go 5 mph on the bridge due to the high winds. Even in spite of the hazards, people trespassed on the bridge long before it became legal and safe to do so. One reason was there was a rumor that a bank robber had hid $40,000 somewhere on the bridge, and people were searching for it.

By acquiring trackage rights over the nearby B&O Railroad in 1959, the Erie could bypass the Kinzua Bridge and move trains faster than the 5 mph speed limit. Yes, the Kinzua was an incredible bridge and an engineering marvel, and yet its technical limitations would eventually render it obsolete as a railroad bridge.
The bridge was acquired by the Kovalchick Salvage Company, which was nonetheless hesitant to dismantle it, given its history and size. Rather than dismantling it, the company worked with preservation groups who convinced the State of Pennsylvania to acquire the bridge and property around it, turning the area into a state park.
Between 1987 and 2002, the bridge would be the main attraction for the Knox and Kane Railroad, a heritage railway which ran excursion trips over the bridge. Sadly, 2002 would be the last time rail traffic used the bridge.

DISASTER STRIKES:
In 2002, the bridge was closed due to the structure being deemed insufficient for both railroad and pedestrian traffic, after an inspection proved that the bridge was at risk of collapse. The state had begun repairing the bridge in early 2003, but Mother Nature had other plans. 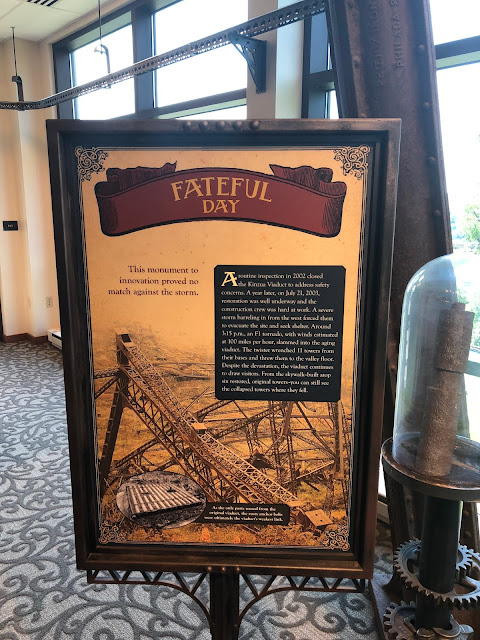 As I've written about previously, disaster strikes indiscriminately, and the Kinzua Bridge was no exception. While repair work was being done on the bridge, a F1 tornado struck the northern part of it on July 21st, 2003. The storm caused half of the bridge to collapse.

It would have cost $45 million to repair the bridge in its entirety. Instead, Pennsylvania chose to rebuild half of the bridge as a skywalk, and leave the other half in its collapsed state. The skywalk now has an observation area, and a glass floor where one can stare at the bottom of the valley, 300 feet below (no thank you!)

The State also provided funds for the visitor center and museum mentioned earlier, which has artifacts and exhibits from the local area's railroad and coal history, not just of the bridge. 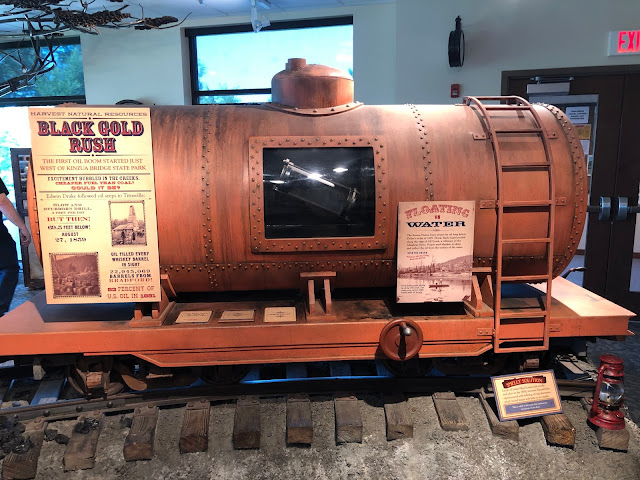 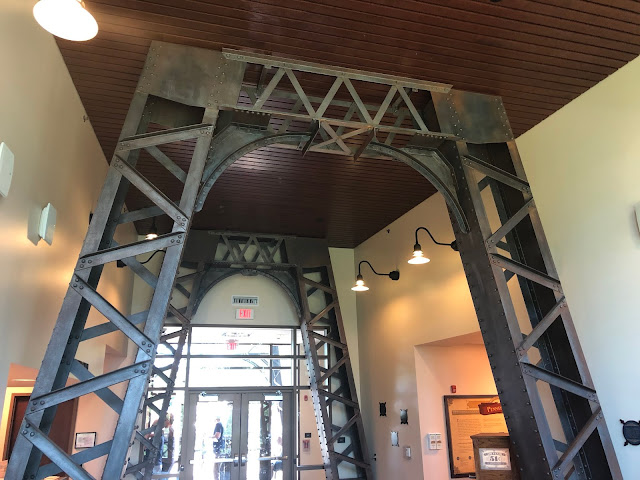 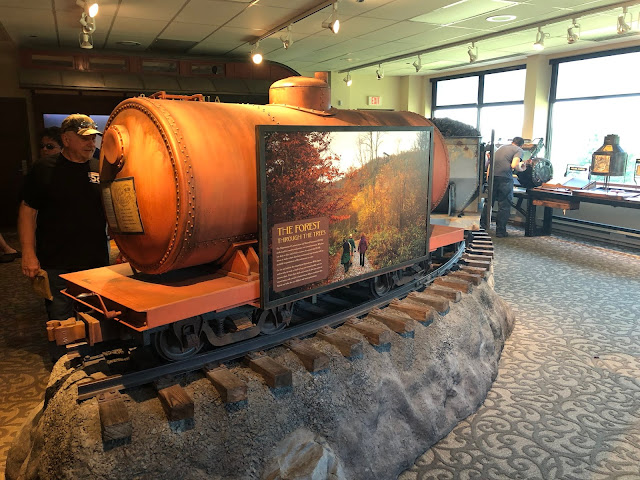 The gift shop sells your typical t-shirts and key-chains and whatnot, but also has handmade arts and crafts from local vendors, so it's worth a visit to see some unique items! Exiting the visitor's center, the bridge is just a short downhill hike north. While steep, the path has switchbacks, making it wheelchair accessible. 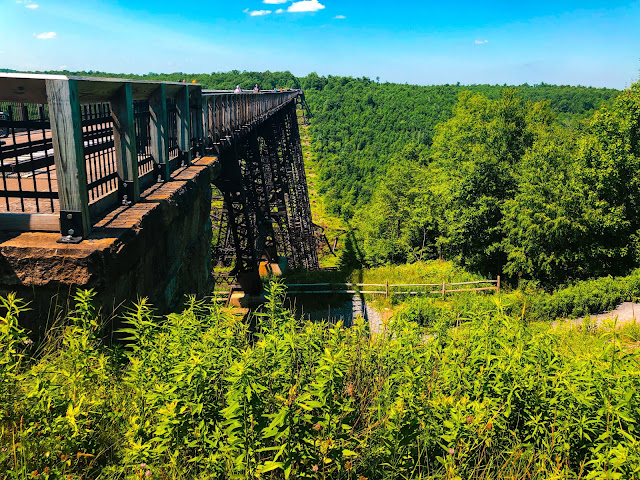 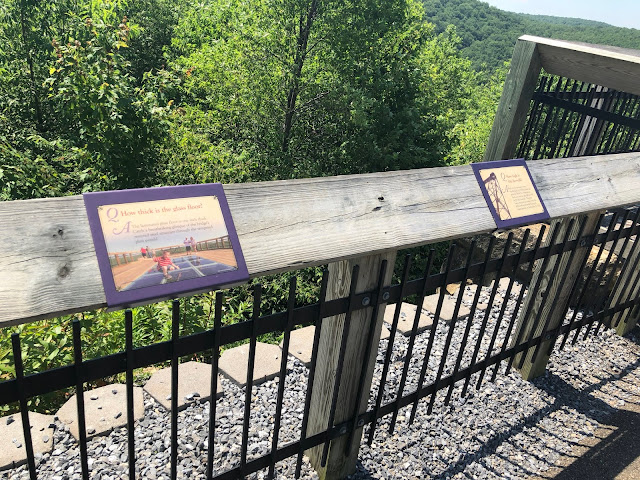 The park also has a trail leading to the bottom of the bridge, where some truly amazing photos can be taken of its underbelly.

In the time I have been blogging about abandoned railroad lines, which admittedly isn't very long, there is no better example of how pictures do not do justice to a place than Kinzua Bridge. I look forward to finding out if the same is true for the Route of the Hiawatha trail, although I have no plans to visit it in the immediate future, unfortunately.

With that said, I strongly urge you to visit this place, whether you're interested in abandoned railroads or not, the area is an amazing site to see! I cannot stress, however, that if you don't like heights that you will have reservations about going on the bridge, but it's a view and a part of history you can experience nowhere else, so face your fears and do it!