August 06, 2018
There are only a handful of more iconic board games out there than Monopoly. The game, originally designed to show the harm monopolies can cause to economies has become one of the most recognizable board games, even in spite of the fact that mathematical analysis has essentially broken the game down to a science. Whoever gets the orange properties and the railroads usually wins.

Originating as The Landlord's Game in the early 20th Century, the current iteration began production and sales in the mid-1930's as the game we know today, and although certain rules and cards have been updated over time, the game remains largely the same, regardless of which of the over 1,000 versions of Monopoly you're playing.

The original game is based in Atlantic City, and uses streets and rail lines that were in Atlantic City at the time. And while the main game hasn't changed, the city it is based off of definitely has. Here are some examples of what things look like today in Atlantic City, as well as how things have changed along the Monopoly board, both for the railroads and streets.

Starting at GO:
The two property colors (Brown and Light Blue) are from first to last from GO, Mediterranean Ave, Baltic Ave, Oriental Ave, Vermont Ave and Connecticut Ave, and the first Railroad is the Reading Railroad.

In real life Atlantic City, Baltic Ave and Mediterranean Ave are indeed right next to each other. You can see what they, and the rest of the properties in Monopoly look like today in this blog.

Also, this handy map shows the locations of each road which is a property in the game. 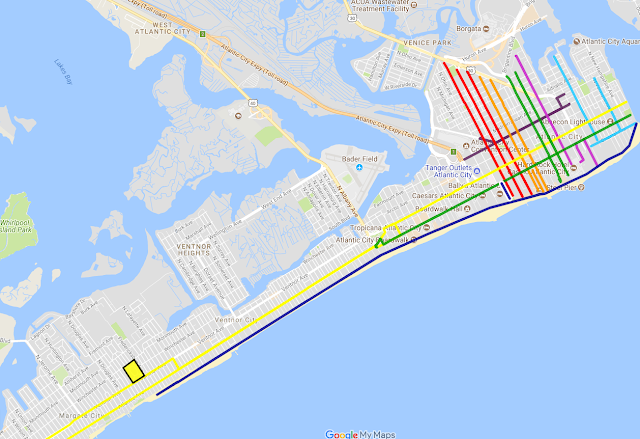 Oriental Ave and Vermont Ave intersect a few blocks west of the Atlantic City Boardwalk, and were impacted by Hurricane Sandy. Today there still remains plenty of vacant land in and around the southeast part of Atlantic City, as a result of both the hurricane as well as economic downturn since the 1970's.

Connecticut Ave & Oriental Ave also intersect, at that location lies the very large Ocean Resort Casino.
The Reading Railroad (pronounced Redding), was a railroad in Pennsylvania which owned the Pennsylvania-Reading Seashore Line, which ran to Atlantic City. A line owned by this company use the right-of-way near the Atlantic City Expy, but would later relocate north after construction of the Atlantic City Airport. The line is still in service to this day, although the Reading was consolidated into Conrail in 1976.


JAIL to FREE PARKING:
The left side of the board represents the most frequently landed on properties as a result of the ease of which people go to jail in Monopoly. Thus, if you have a monopoly of New York Ave, Tennessee Ave and St. James Place (i.e The Orange Properties), you're likely to have a significant advantage in the game.

The Purple Properties next to jail include St. Charles Place, States Ave & Virginia Ave. The Railroad in this quadrant of the board is the Pennsylvania Railroad. The first utility in the game, the Electric Company, is also found in this quadrant.

Let's start with the Purple. St. Charles Place no longer exists, as it has been replaced by the Showboat Atlantic City. It nonetheless was located at States Ave between Pacific Ave and the Boardwalk.

Virginia Ave was located a block west of St. Charles Place, and before the Hard Rock Hotel was built, led to the Steel Pier Amusement Park, which is still in operation to this day.

The Pennsylvania Railroad never directly served Atlantic City, but was a partner in the aforementioned Pennsylvania-Reading Seashore Line. It was likely included in the game because of it's significance to railroading in the Northeast. It, along with the New York Central were the two largest railroads in their territory. While the NYC and Pennsylvania would later merge into the newly formed Penn Central, this would have disastrous consequences which would lead to the creation of Conrail, as detailed in The Wreck of the Penn Central.

FREE PARKING to GO TO JAIL:

Assuming you didn't hit it big in the house rule of landing on Free Parking and winning a jackpot, you come to the Red Properties of Kentucky, Indiana, and Illinois Aves. All three of these roads run north to south, immediately west of Tennessee Ave, and each one end at Absecon Blvd and Boardwalk, respectively. You won't find Illinois Ave though, as it was renamed to Dr. Martin Luther King Jr. Blvd in the late 1980's.

The top railroad, the B&O Railroad, also did not directly serve Atlantic City, but had a controlling interest in the Central Railroad of New Jersey.

The Atlantic City Municipal Utilities Authority is the real life equivalent to the second utility in the game, the Water Works.

Marven Gardens once fell into disrepair, but the area has been lifted by the housing boom beginning in the early 21st century, according to Wikipedia.

GO TO JAIL to GO:
The most expensive properties in the game are found on the right side of the board. North Carolina Ave and Pennsylvania Ave are located in the Central Park of Atlantic City parallel to each other. Pacific Ave runs east-west and ends at Atlantic Ave which continues on past the Atlantic City Limits.

North Carolina Ave extends past Absecon Blvd all the way to ramps for Brigatine Blvd, stopping immediately south of the Borgata Hotel and Casino. On the south end, the Resorts Casino overlooks the Boardwalk.

The Short Line Railroad's real life counterpart was a streetcar called the Atlantic City & Shore Railroad, and is no longer in service. Running between Atlantic City and Ocean City, it was abandoned in 1948, succumbing to the same fate that many other interurban and streetcar systems faced after World War II.

Park Place is the smallest street which is also a property in the game (and one of the least likely landing spots as well), but nonetheless is the location of Bally's Casino. Occupying space between Pacific Ave and the Boardwalk, it is located immediately west of Indiana Ave.

The Atlantic City Boardwalk is probably the most iconic locale in all of the city, and is also the most expensive property in the game.

The Boardwalk is southernmost area and is only accessible by pedestrians, and continues beyond the city limits. As such, it was (and remains) highly vulnerable to hurricanes and storm surge, as Sandy showed when it made landfall in October 2012.

The Boardwalk has nonetheless been repaired in the time since the Hurricane. While the economy has improved in Atlantic City over the last few years, it still pales in comparison to the city it was when Monopoly was first released. Like all cities, Atlantic City has changed significantly, even if it's 1930's days are fully cemented in board game lore as the location for Monopoly.