A Visit to the Monticello Railway Museum

By FRRandP July 21, 2019
This weekend, we made the trip down to Monticello, IL, to visit their eponymous railway museum. The museum is located on right of way once occupied by Illinois Central Railroad, and the Interurban freight line Illinois Terminal Railroad. Right from the exit on I-72, there's neat things to look at here!

Given that it was an extremely hot Saturday, I was more excited for the air conditioned car than for the fact that our power that day would be Southern Railway 401.


But before we look too much at the experience, let's talk about the museum itself. The Monticello Railway Museum was founded in 1966 as the "Society for the Perpetuation of Unretired Railfans" - or SPUR, per the Museum's history page. By 1982, they had become the MRM that we know today. purchasing both ex-IC trackage, ex-Illinois Terminal trackage, and building their own for storing rolling stock.

The line itself dates back to the 1870's, with a charter from 1861. Construction began in 1863 as the Monticello Railroad Company. Like many companies in the late 19th century, they consolidated with their peers to form larger conglomerates. In this case, they merged with the Havana Mason City Lincoln & Eastern Railroad, and the Indianapolis Bloomington & Western Railway, with the three companies becoming the Extension Railway. The line defaulted and was reorganized in 1879 as the Champaign Havana & Western Railway. One year later, it would merge again with the Wabash St. Louis & Pacific Railway (better known as the Wabash Railroad).

The Wabash held the line for only six years, selling it in 1886 as it was facing bankruptcy. The newly incorporated Chicago Havana & Western Railway, owned by Edward Harriman, who also had interests with the Illinois Central Railroad.


The Illinois Central (and Illinois Central Gulf after the merger with Gulf, Mobile & Ohio) ran the line for most of its history. In 1888, they leased it, and purchased in 14 years later for the right of way, rolling stock, and one dollar in cash.

In 1987, the museum purchased the Illinois Central trackage, ostensibly being the end date for IC railroad service along the route.

In its place, the museum runs about 5 miles of track between Monticello and White Heath, IL, naming their "stations" White Heath, Blackers, Nelson Crossing (where the museum rides begin), Dighton, and Monticello. It also has an extensive list of rolling stock, although I was unable to spot perhaps its most famous passenger car, the "Nautilus", owned by the Shedd Aquarium. The Nautilus transported passengers and aquarium fish to the entrance of the aquarium along IC trackage that has long since been abandoned.

But in spite of missing the Nautilus, I have to say this is probably the best visit to a rail museum I've had to date, and an air conditioned railcar had a lot to do with that. The last car in the consist was air conditioned, but there was an open-air car at the front as well.

I mentioned being thankful for the advent of air conditioning at the last museum I visited, the Coopersville & Marne Railway, and it was only about 85 degrees that day. It was well over 90 by the time our ride began!

Also, Southern 401 purred during our visit, running faster than 15 mph that the C&M did, and with a much smoother ride at that. Kudos to all the volunteers for being able to keep such an old machine running as it does!

I got some more pics of some of the static equipment the museum shows off, including this Republic Steel Corporation 0-6-0 switcher steam engine. 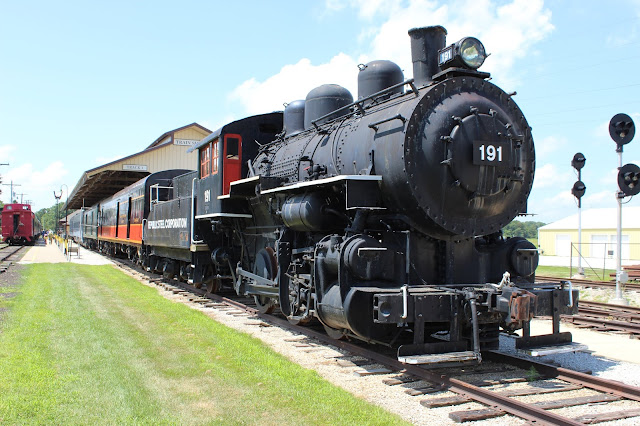 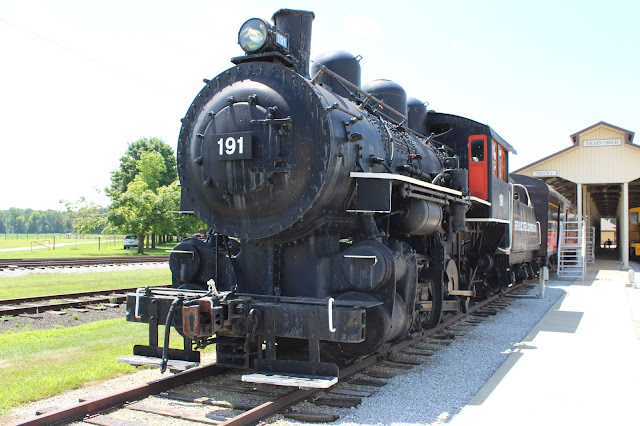 And this Lincoln Sand & Gravel Company diesel from 1940, pictured below. 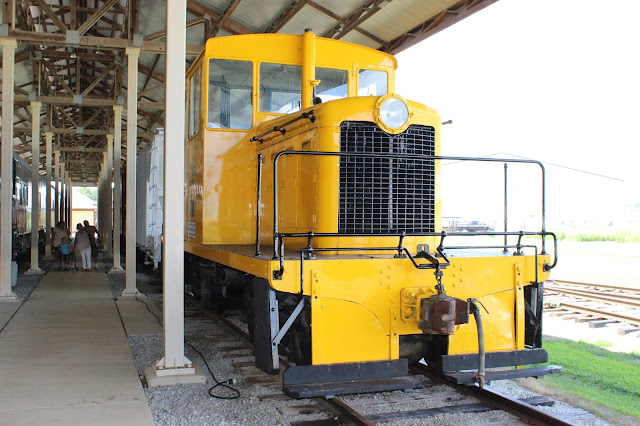 The train ride took about 55 minutes, and I think we stayed at the museum for roughly two hours total. In addition to the rolling stock, they also have a gift shop with your typical museum stuff in it, including t-shirts, books and hats.

Like every museum, they can only preserve our railroad history by people like you visiting, so I suggest taking a trip down to Monticello at some point and taking a ride on the line!