The Straightest Abandoned Track in the US

Railroad lines attempting to brave the terrain of the Rocky Mountains meant that some of the tightest curves ever in the US railroad network were located in the State of Colorado.

But that doesn't mean every railroad line meanders about in the State. Ironically, one of the longest straight (tangent) sections of track was also located in Colorado, along a Denver & Rio Grande Western Railroad line running between Alamosa and Poncha Springs, CO, known as the Valley Line.

DRGW.net describes the Valley Line as such, "The original part of the Poncha Pass route, from Mears Junction (joining with the Marshall Pass main line) down to Orient, was initially constructed along with the mainline in 1881. Nearly a decade later in 1890, the line was extended down from Villa Grove to Antonito, CO, where it connected with the existing the existing narrow gauge lines: La Veta Pass, the Antonito Branch, and the Creede Branch. The line from Villa Grove over to Orient became the Orient Branch. Due to the extremely long, straight stretch across the northern San Luis Valley - probably one of the longest on the Grande - the line became known as the Valley Line."

Since the line occupied the relatively level area between two mountain ranges, there was no need to move with the land, and the railroad could run an extremely straight right of way. 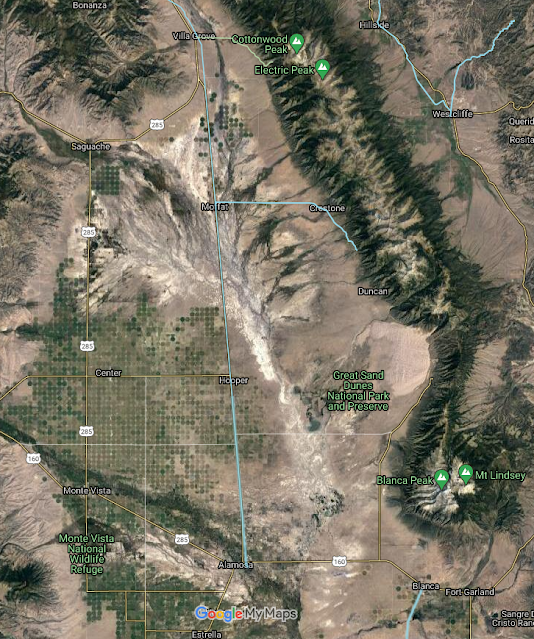 Much of this grade paralleled present-day Colorado Route 17.

Just north of Alamosa all the way to Villa Grove, the line was perfectly tangent for nearly 53 miles, with no curves whatsoever.

Nonetheless, this line would be abandoned some time in the 1950's. According to DRGW.net, "Most of the route - from Mears Jct down to Hooper - was abandoned in 1951. Without the Marshall Pass line in place, there was no northern narrow gauge system to connect with, making the line pointless. However, the dual gauge stretch to Hooper would live on as the standard gauge Hooper Spur until it, too, was abandoned in 1959."