The Cemetery Next to a Particle Accelerator: St. Patrick Cemetery

By FRRandP November 22, 2019
In the early 1950's, at the height of new discoveries in nuclear energy, Argonne National Laboratory had outgrown its original campus at the University of Chicago, as well as the forest where it had conducted other experiments during the late 1940's, where currently the world's first nuclear reactor remains buried today.

The site chosen would be on 3,500 acres in unincorporated Downers Grove Township in DuPage County, IL. What was once farmland would be converted into space to develop energy, weapons, and other Cold War inventions designed to keep the United States as the premier superpower in all things technology.

However, two of those acres held cemetery land owned by a nearby church, St. Patrick's Catholic Church in Lemont, IL. The decision was made to keep the cemetery in its original location, as opposed to relocating it to accommodate the laboratory. As such, it is impossible to travel to this cemetery by vehicle, but you can walk along the former Bluff Road from the Waterfall Glen Forest Preserve.
“These are the only two acres the government doesn’t have anything to say about,” said Polly Hanrahan, the caretaker of St. Patrick cemetery for over 40 years.

While this preserved the grounds, it made traversing to the cemetery quite difficult. The cemetery is freely accessible today, but not without at least two miles of walking each way. Today's blog focuses on the history of this cemetery, and what the cemetery looks like today.

A Bit of History on St Patrick Cemetery notes that, "Most of the early settlers who are buried there were born in Ireland, came over in the 1830’s and pioneered the farms surrounding the ground." It's quite easy to tell the Irish ancestry of the cemetery, as many of the last names appear from Irish descent.

"The two acres of farmland for the cemetery were purchased in 1849 by the Chicago Catholic Diocese from Mr. and Mrs. Nicholas Mulvey, who are both buried there."

Construction of the lab closed off Bluff Rd to vehicle traffic, which was the main road through the area, and where St Patrick's was accessible from.
Now, the only way to access the cemetery is via the Waterfall Glen Trail, where the old Bluff Road branches from.

The Waterfall Glen Trail is easily accessible to bikes or hikers, but when crossing onto Bluff Rd, the pavement becomes quite rocky.

Argonne's Argonne Tandem Linac Accelerator System is visible from the path opposite the fence.

After about another mile of walking, pavement for the cemetery comes into view, more trees and grass dot the area as well.

The cemetery itself is not large, but it is well cared for by the church. Several of the graves have names on them that would be familiar to anyone who knows the nearby streets, such as Kearney Road. 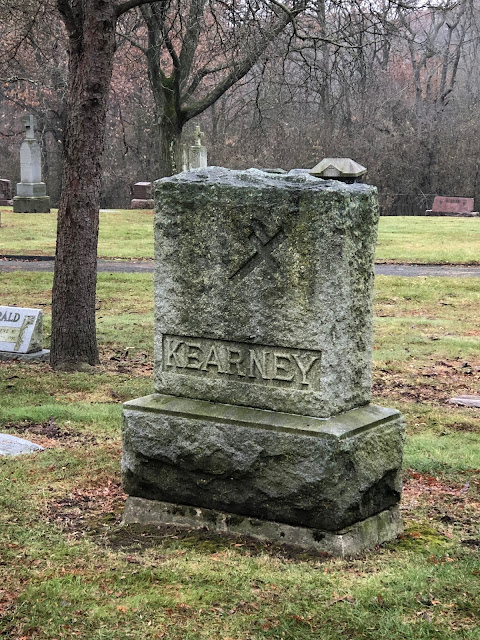 When I refer to this cemetery as "nearly" abandoned, it should be noted that I label it as such because despite the lack of use and visitors, myself not-included, it is still well maintained by the St Patrick Church in Lemont, despite it being well out of the way of most vehicle traffic, and requiring a significant walk to visit. As such, it is not included on our Abandoned Cemeteries map.


Like with most cemeteries nearby of any faith, plots are completely full here. It was proposed to add more cemetery space; however given how difficult the walk is to the grounds already, the proposal was ultimately not acted upon.

A Bit of History closes with this on the cemetery, "Surrounded by Argonne property, Mass is celebrated here each Memorial Day and attended by many parishioners and visitors who are taken back in time to their childhoods and beyond, remembering honored loved ones; a generous faith-filled generation of souls; the founders of our country and the original stewards of our historic Parish."