If you'd rather not have the vast majority of abandoned railroad corridors across the United States, and at some point, the World, directly at your fingertips, but would rather use maps and imagery to find your own hidden, forgotten, or abandoned places, there are four main resources I, and most others, use to accomplish that end. I've already talked about how to find and trace railroad corridors using Google My Maps, but this information will be a little more general in nature, and you can find all sorts of abandoned places, not just railroads, with the maps that are shown here.

Of course, these aren't the only free resources available, and there are some places that you won't find using any four of these resources, however, these should be the start of your search for historical places, as each can probably help you find what you're looking for about 90% of the time.

All of these resources are found on our Links page as well.

Historic Aerials may sound like it just has aerial imagery, but it also has access to an incredible amount of topographic maps of the United States as well, making it a one stop shop to compare aerials and topographic maps, and includes an overlay function as well! I have found an incredible number of abandoned railroads using this site.
There's only three real complaints about Historic Aerials that I have, one of which being the annoying level of copyright watermarks on their aerials and topos, neither of which is theirs entirely, and the second being that you cannot pull GPS coordinates from their viewer, despite the fact that both the aerials and topos are clearly georeferenced, which can make things slightly more difficult when plotting onto another mapping platform (i.e. Google). Finally, it's only for the US.
Overall though, Historic Aerials is an incredible resource for the Continental United States.

There are three links here, but each works for their respective country's topographical maps. Interestingly, the USGS includes some maps that aren't available on Historic Aerials. Additionally, one can find topo maps for Alaska, Hawaii and Puerto Rico through the USGS.

The Canadian Scholars Geoportal includes access to topographical maps for Ontario and a few other parts of Canada, but only seem to be really available in the far southern part of the Province. While it is somewhat difficult to use, it nonetheless is one of the only resources I've been able to find for official Canadian Topo Maps.

Probably the best resource in this family belongs to the National Library of Scotland, who provides side by side imagery of British topo maps. Additionally, one can find topo maps of Ireland, and the Greater United Kingdom, in addition worldwide topo maps (although these are generally low-resolution),

The Sanborn Fire Insurance Company made some incredibly detailed maps in the late 19th century up until 1977, giving underwriters solid data on potential risks of fire for structures during this period.

The Library of Congress maintains a library of over 50,000 of these maps, with over 35,000 available online. Additionally, the University of Illinois at both Urbana Champaign and Chicago contain a library of Sanborn maps as well, with some of these only being accessible on microfilm, but a large portion available online.

These maps represent some of the most accurate maps for industrial history that we have from the 19th and early 20th centuries, but can be hard to read, and typically were not published for rural communities, only in relatively populated areas.

David Rumsey and Stanford University have amassed a collection of over 150,000 historic scanned maps, many of which are georeferenced, and the ones that aren't can be with a tool on the page! 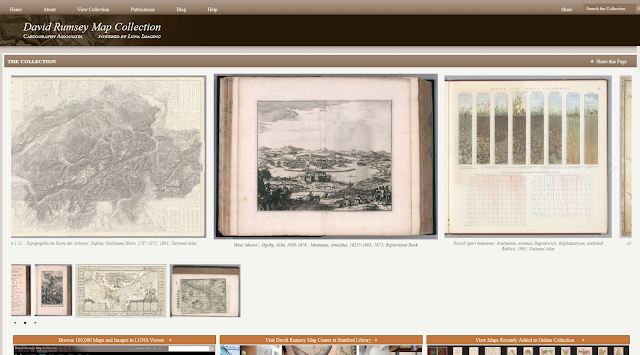 My only complaint with this site is that it is a little hard to navigate and find what you're looking for, but that is to be expected when dealing with a collection of this size. But overall, this has some of the best maps one can find for not just the US, but the entire world.

Overall, for one looking to learn about their history of places and abandoned things today, there are many resources for that end. Still, no one resource, not even my own, will ever answer everyone's questions, and finding multiple primary and secondary resources are still the best idea when analyzing history.