The Forgotten Railways of Chicago: Scarchitecture

By FRRandP March 18, 2018
Scarchitecture, a portmanteau of the words scar and architecture, is somewhat of an internet buzzword. It refers to the remnants left behind by abandoned or disused infrastructure or old buildings, and how one can find, using satellite imagery, evidence of old roads, railroads, and all sorts of remnants of a city that once was. This blog post from 99% Invisible explains the phenomenon far better than I could. Applied to the old rights-of-way of railroad corridors that ran in the urban core, one can see examples in nearly every corner of Chicago, as well as many other cities.

Of course, not every abandoned railroad right-of-way leaves a scar, in fact I was quite surprised to learn that Chinatown Square occupies what was once a former rail yard of the Atchison Topeka & Santa Fe. In fact, much of the industrial area east of the Chicago River was once home to various rail yards, with very little, if any evidence remaining of their former lives. It is also impossible to trace the abandoned streetcar network of the city relying solely on satellite imagery alone. That being said, the railroad network of Chicago is so large, and was even larger in the past, that there's plenty of scarchitecture to be found.

Once of the best examples in my opinion is actually right near Wrigley Field. Within the red box, the right of way of the former Milwaukee Road Evanston Division can be found. The south end of this line linked up with the Kingsbury St line, of which the Chicago Terminal Railroad just stopped running.

In the sense of being able to find abnormalities with the buildings and roads around it, the Kinzie Street Bridge doesn't qualify as scarchitecture. But it is a remnant of the Chicago & Northwestern's role in the development of the area around Merchandise Mart. This line actually traversed under quite a few buildings en route to Navy Pier. It was never technically abandoned, although the last time this bridge had any activity was for the Chicago Sun Times in 2000.

Along with the still in-use St. Charles Air Line Bridge, the B&O Railroad owned an adjacent bridge as well. This bridge is permanently in the upright position. It is quite easy to note the abandoned approaches to the bridge. It is at this moment considered abandoned, however it is also being considered for use if any additional high-speed rail projects materialize. This bridge is quite easy to see for people traveling on the Metra and Amtrak lines leaving Union Station to the south. 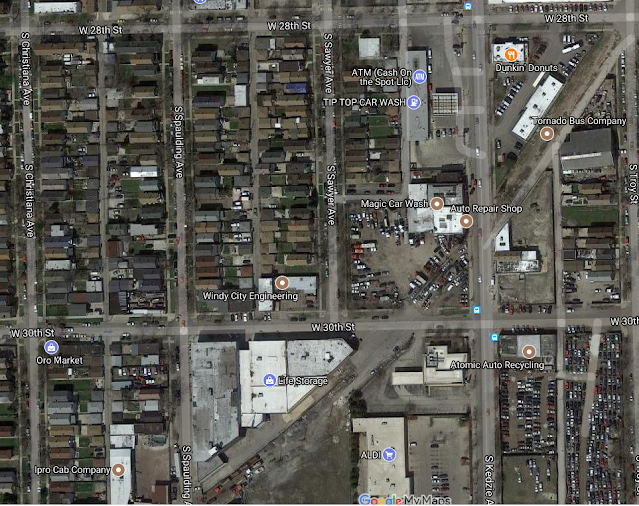 A bit southwest of Cook County Jail, the remnants of an abandoned line that once fed into BNSF's Corwith Yard can be spotted, as well as buildings which are cut in odd-angles nearby.

Another great example of scarchitecture can be found on the south side around 81st St and Yates Blvd. The Brookdale Branch of the B&O's right-of-way is currently a few different housing developments, all of which do not conform to the homes on the grid all around them. 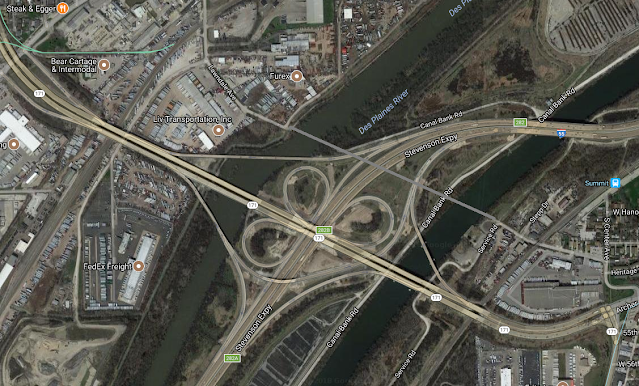 As stated earlier, scarchitecture is not simply a phenomenon related to railroads; this was the former road bridge in Summit, IL along what is present day IL-171. Back in those days, this was IL-4, IL-4A and IL-213. Also noteworthy, although the roads to the east and west of where the former bridge was are now primarily industrial roads with little traffic, IDOT still maintains them. Scars of former infrastructure exist not just in the physical world, but in governmental agreements as well! 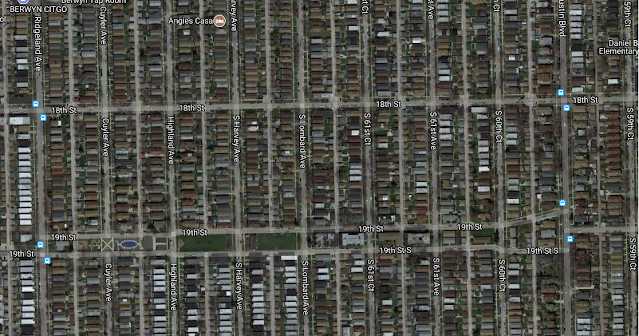 Back to railroads again. 19th St in Berwyn and Cicero between Austin and Ridgeland is built to occupy the right-of-way of a former electric line, what I believe was the Chicago & West Towns Railway. It is most noticeable at Austin, where the north side of the road strangely turns for no apparent reason.
The building shaped like a quarter-circle near Grand and Natchez is a remnant of a local line abandoned by the Soo-Line (Canadian Pacific) in 1999. 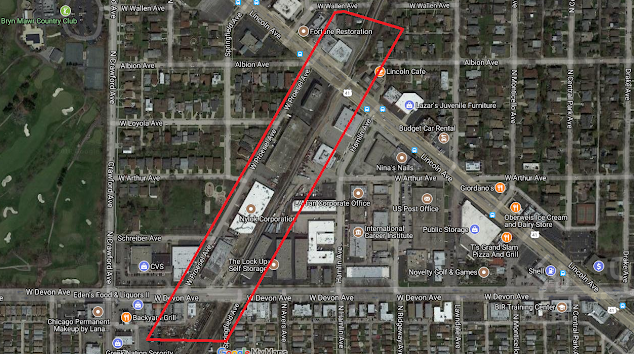 The other Chicago & Northwestern line to Evanston, the one beginning at Mayfair Junction, has some notable remnants in architecture near Devon Ave and US 41. Much of the right-of-way has turned into a rail trail.

Let me know if you know of any other examples of scarchitecture, both in the Chicago area and in your own neck of the woods!